FETÖ first broadcasts the assassination then carries it out 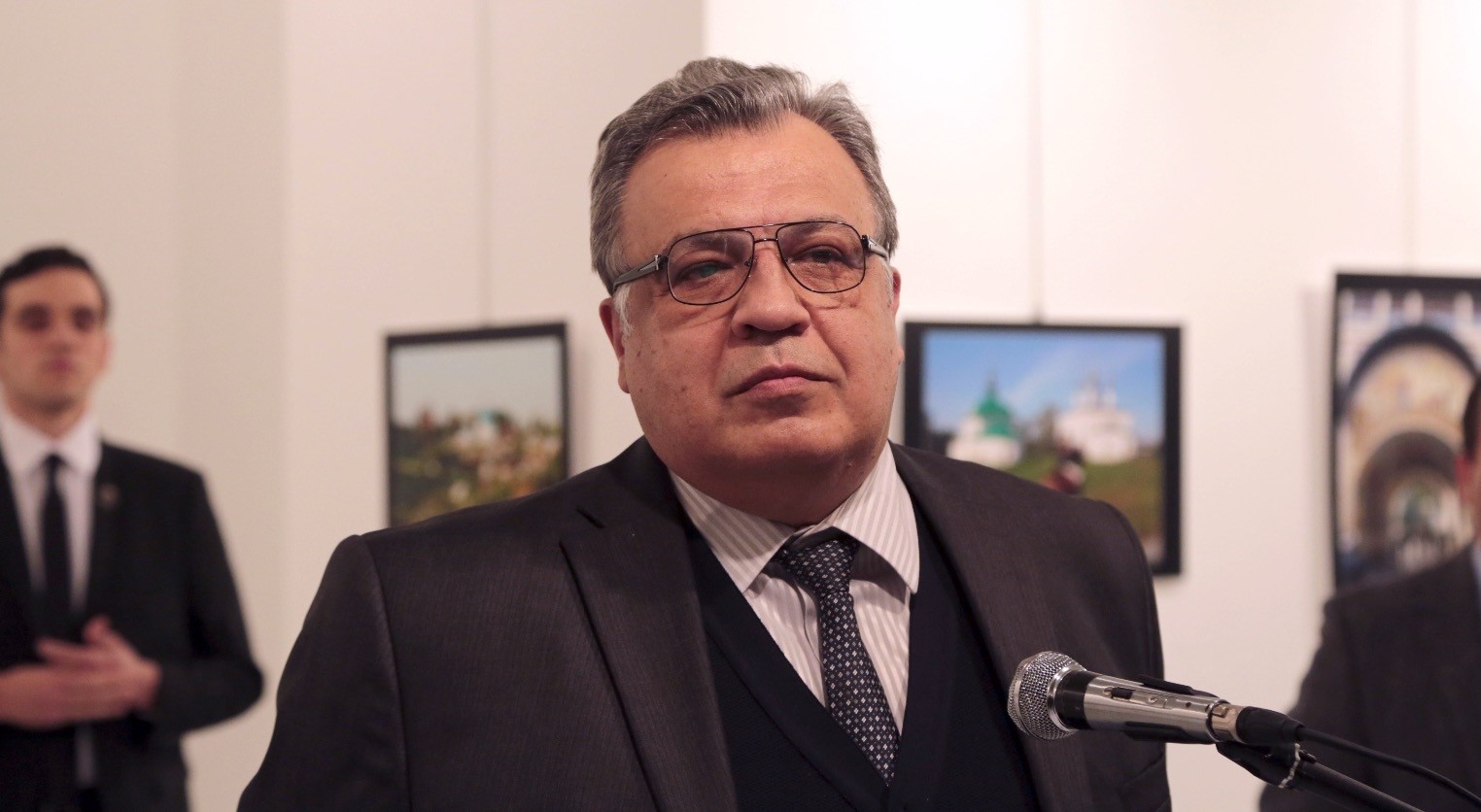 The assassination of Russia's envoy Andrey Karlov in 2016, planned by FETÖ to harm relations between Ankara and Moscow, copied the scenario of a TV show

The assassination of Russia's ambassador to Ankara, Andrey Karlov, on Dec. 19, 2016 was copied from a TV show that appeared on STV, which formed the television leg of the vast media empire of the Gülenist Terror Group (FETÖ), according to the indictment against 28 suspects released last Friday.

Karlov was killed by an off-duty police officer in an art gallery in Ankara, prosecutors say the assassin first tried to kill Karlov in an event hosted by Turkey's ruling Justice and Development Party (AK Party) six months before the assassination. STV was shuttered after the July 15, 2016 coup attempt along with other FETÖ-linked media enterprises.

Fetullah Gülen, leader of the terrorist group which is also blamed for the coup attempt, is among the 28 suspects in the indictment presented to a court in Ankara on Friday.

The 77-year-old Gülen, who patiently built his network of Gülenists for decades and planted them into the army, law enforcement, judiciary and bureaucracy, left Turkey in 1999 while his movement, known as "Hizmet" then, was still being recognized as a charity with religious undertones.

FETÖ once wielded considerable clout in the media where it ran a broadcaster. The group owned several TV stations, a publisher behind newspapers and magazines that disseminated the group's propaganda and several radio stations.

Most were closed down as part of the crackdown on FETÖ and were handed to trustees as the legal process against FETÖ members got underway. The media was key for Fetullah Gülen, the U.S.-based leader of the terrorist group, to spread his messages to his followers.

Gülen is already implicated in a string of criminal cases from the coup attempt carried out by his followers in the army, to sham trials against his critics and the government.

He currently lives in the United States, where occasionally gives interviews from his sprawling compound in Pennsylvania. Turkey has repeatedly asked for his extradition from the United States but Washington has apparently dragged the process, refusing to recognize FETÖ as a terrorist group. Several defendants in the case stay with Gülen in his compound and according to prosecutors, are senior cadre of FETÖ. Most were in the United States for years while others fled there shortly before the 2016 coup attempt and some fled after the coup attempt that paved the way for a wider crackdown on the terrorist group.

Mevlüt Mert Altıntaş, the police officer who killed Karlov, was killed in a shootout with police. The indictment says Altıntaş originally planned to kill the ambassador at a dinner for ambassadors hosted by the AK Party on June 27, 2016 but scrapped the plan when Karlov did not attend and went on a trip abroad instead. Prosecutors say FETÖ and "foreign powers that used the group" aimed to derail bilateral relations between Turkey and Russia through the assassination and "drive the countries to a possible conflict" as well as "creating chaos ahead of July 15, 2016."

Prosecutors, in the 609-page indictment, argued that the scenarios of TV shows that appeared on STV were used as inspiration by FETÖ operatives.

The TV show in question, "Nizama Adanmış Ruhlar," in its 89th episode that appeared on the channel on Dec. 30, 2014, featured the assassination of an ambassador at an exhibition hall. In the indictment, it was said that Gülen used FETÖ's media organs to spread its messages and communicate its orders.

Also in the indictment is the testimony of a former agent of the National Intelligence Organization (MİT) who was fired for links to FETÖ. Vehbi Kürşad Akalın told prosecutors that his FETÖ handler was Hüseyin Kötüce and that the two had increased the frequency of their meetings after the downing of a Russian fighter jet that violated Turkish airspace on Nov. 24, 2015.

"During our meetings, Kötüce constantly asked me about the security at the Russian Federation's Embassy in Ankara," Akalın said, according to the indictment.

"I told him information about Karlov, which he noted in his laptop. I don't know where the information went." He said Kötüce also asked him about whether bodyguards accompanied Karlov.When he asked how the information was to be used, Kötüce told Akalın that senior FETÖ members, called "abi," would be assessing the information for proper use at the appropriate time.

Akalın said he met Kötüce and another person he identified as Cemal Karaata in 2015 or 2016 at a friend's home and added that he was told Karaata was very close to Gülen.

Akalın told the authorities, "My personal opinion is that FETÖ is directly implicated in the assassination. I believe Altıntaş was selected by the group because he was a psychologically troubled individual."

Kötüce, who admitted his membership to FETÖ, was also questioned. He said Karaata was his handler, or abi, in the group. "He [Karaata] asked for information about the Russian Embassy sometime in spring 2016 and I got the information from Akalın." When he asked about how the info would be used, he was told to mind his own business. Once, Karaata told him that he would be going to the U.S. to personally deliver some information to Gülen, Kötüce said. "That's why I believe all the information I provided went to Gülen.

"In practice, Fetullah Gülen collected all the relevant information before making a decision. I believe and know that's how things work. There can be no decision within the group without the knowledge of Gülen." He also said Karaata fled to U.S. after the coup attempt.