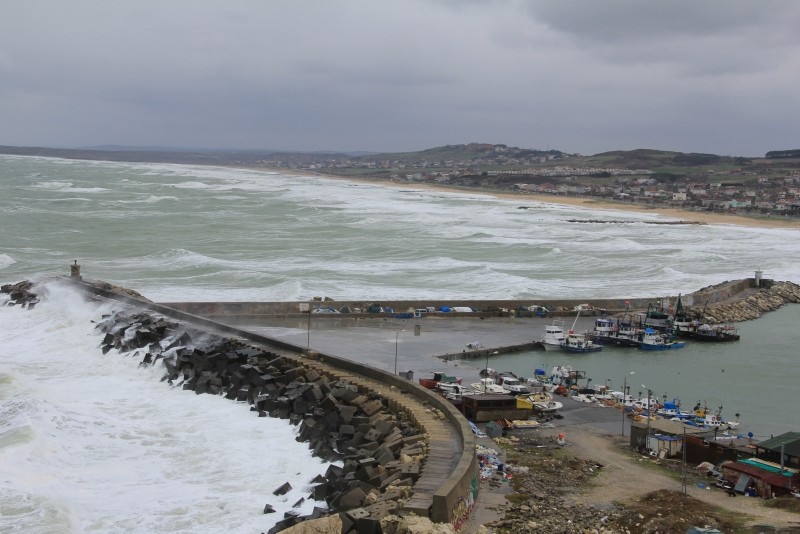 Waves pound the breakwater located on the Black Sea coast of Karaburun village in Arnavutku00f6y district. (IHA Photo)
by Daily Sabah Dec 06, 2018 12:00 am

Strong northeasterly winds sent temperatures down by 4 to 6 degrees Celsius Thursday in northwestern Turkey, bringing strong rainfall and disrupting sea traffic in the Marmara Sea and the northern Aegean.

The Turkish State Meteorological Service (TSMS) announced that Istanbul, Kocaeli and Sakarya provinces will receive strong rainfall throughout much of the day. Winds will blow from the north and northeast at a speed of 30 to 50 kilometers per hour, reaching up 60 kilometers in some areas, it added.

The ferry services of Istanbul Sea Buses (IDO) and Bursa Sea Buses (BUDO) between Istanbul and towns on the southern coast of the Marmara Sea were canceled due to large waves and low visibility. The TSMS said that strong rainfall and fog will be widespread in Bursa province for a couple of days.

The winds also joggled planes landing in Istanbul's Atatürk International Airport, causing nail-biting moments for passengers. Despite the discomfort, no cancellations have been announced so far by airliners since the city's two airports are accustomed to southwesterly winds which have caused massive delays and disruptions in the past.

In the northeastern Aegean, ferry services between the Turkish mainland and islands of Bozcaada and Gökçeada were canceled due to stormy weather.