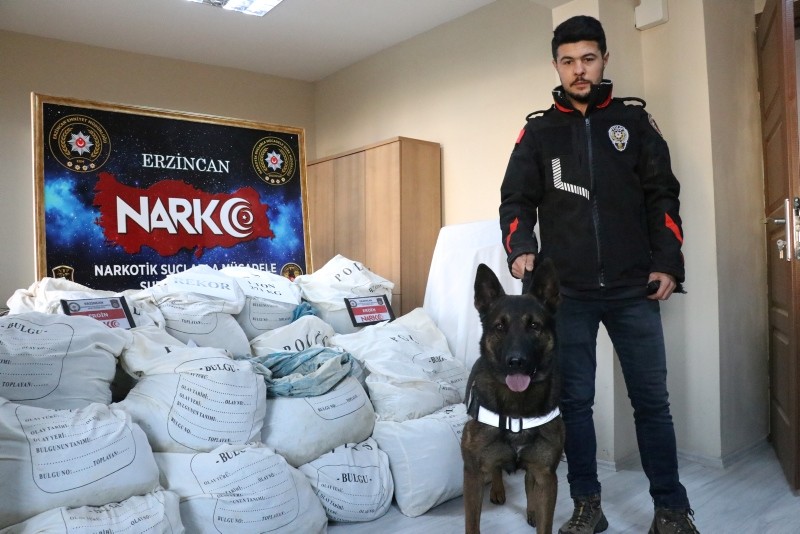 Speaking at the International Narcotics Conference held by the Police Academy Crime Studies and Criminology Research Center (SAMER) in Belek Tourism Center in the Serik district of southern Antalya province, Soylu said that Turkey continues to display a serious and determined fight against drugs on the global scale.

The minister said that Turkish security authorities bring up the drug problem at every international meeting.

The massive amount of the deadly drug was found hidden among animal fat inside the trailer of a truck at a checkpoint erected on the Erzurum-Erzincan highway in the Akyazı district in eastern Turkey on Wednesday.

Bülent Şensoy, the police chief of eastern Erzurum province, told Anadolu Agency that the truck was traveling from the southeastern province of Van to Istanbul.

The heroin, hidden inside 1,395 packages, was found thanks to the attention of police officers and their narcotics dog "Odin," a Belgian Malinois Shepherd.

Şensoy said that three people in the truck and two others in Van were detained in connection to the incident.

In his speech, Soylu also criticized Western powers for failing to understand the links between the PKK terrorist organization and its role in the drug trade on the east-west axis.

"As the organic link between the PKK and drugs is this clear and mentioned in the decisions and reports of European and U.S. official institutions, we cannot make sense of not seeing a serious stance against [the PKK] and instead seeing steps in favor of increasing the production and distribution of drugs, while providing arms, logistical support and legal protection to the PKK; we cannot explain this in line with the norms of civilization in the 21st century," Soylu said.

"Our extradition requests for PKK members sought with red notices are not met, especially when we move towards inner Europe."

Soylu underlined that the People's Protection Forces (YPG), the Syrian offshoot of the PKK receiving arms, money and training from Western powers, is cooperating with Daesh terrorists on the organized crime scene despite fighting each other.

"This whole picture shows us that drug trade is the primary actor in today's proxy wars. If we want a world free of terrorism, we should strive for a world without drugs; the equation is that simple."