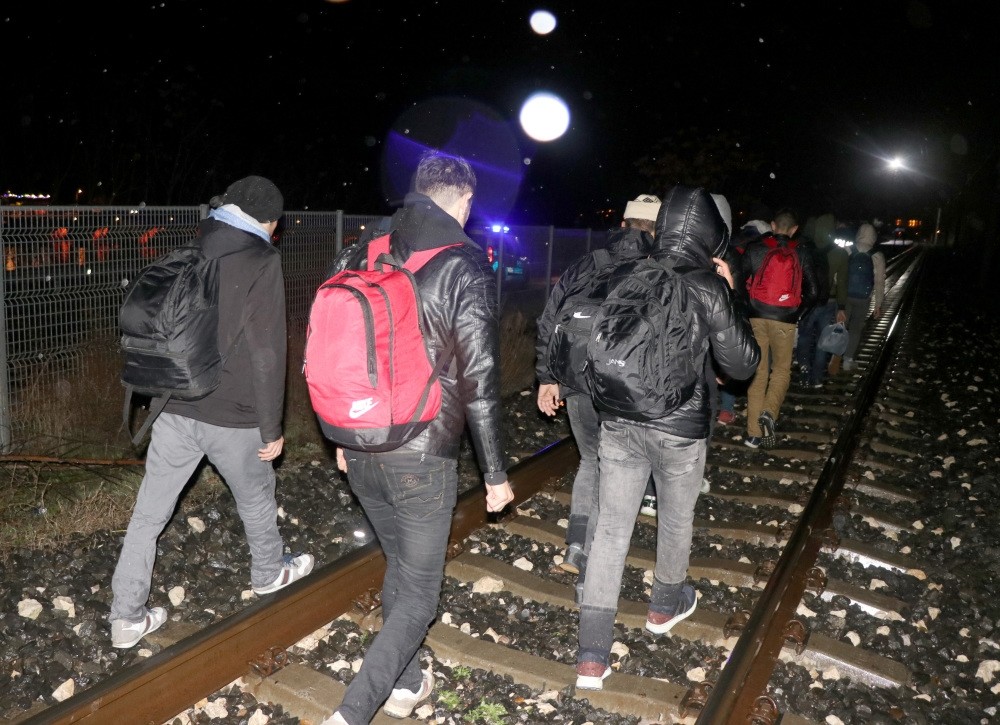 Migrants walk on train tracks near the Turkish-Greece border in Edirne. Edirne has seen an influx of migrants choosing the land route to Europe in recent months.
by Daily Sabah Dec 07, 2018 12:00 am

The body of a man believed to be an illegal migrant was found frozen to death in a Turkish village bordering Greece late Wednesday. This is the fourth body found this week in the region amid accusations that Greece illegally ‘pushes back' arriving migrants to Turkey in freezing weather

Bodies of migrants keep piling up on Turkey's border with Greece, while Greece denies it is involved in illegal "pushback" practices. Villagers in Adasarhanlı, where the body of another migrant was found earlier this week, alerted authorities after they discovered a body in a rice field, a short distance from the Turkish-Greek border, late Wednesday. The man is believed to be an illegal migrant forced to walk back to Turkey in freezing temperatures by Greek police as part of their controversial pushback practice.

An initial investigation shows the man froze to death three days ago, and there were lesions on his body stemming from prolonged exposure to water.

İbrahim Dalkıran, the leader of the village, said they have seen a large number of migrants recently in the area, and many took shelter, in wet clothes or half naked, in Adasarhanlı. "This is a humanitarian situation. Greece sends back migrants almost every three or four days. Some arrive injured, and we call a doctor. It is sad to see them in such a state," Dalkıran told reporters.

Olga Gerovasili, Greece's minister for citizen protection whose ministry oversees border security, has denied previous allegations of pushback and told Anadolu Agency (AA) that Greece is not involved in such incidents. Yet, figures provided to AA by Turkish security sources show many illegal migrants were forced to go back to Turkey by Greek officials, with some 2,490 migrants being pushed back in November alone. The agency reports that some 300 of them were subjected to mistreatment by Greek security forces, ranging from beatings to being forced to go back half naked to the Turkish side of the border.

Three bodies, believed to be Afghan or Pakistani migrants, were found in three villages in Edirne, the Turkish province that borders Greece. More than 70,000 illegal migrants were intercepted in Edirne between January and November, a high number compared to the 47,731 stopped last year as they tried to cross into Greece despite an increase in pushback reports.

Under international laws and conventions, Greece is obliged to register any illegal migrants entering its territory; yet, this is not the case for some migrants. Security sources say that accounts of migrants interviewed by Turkish migration authority staff and social workers show that they are forced to return to Turkey, where they arrived from their homelands with the hope of reaching Europe.

Pırıl Erçoban, a coordinator for the Association for Solidarity with Refugees (Mülteci-Der), says pushback constitutes a serious crime. She said it was "sad and unacceptable" that three migrants died, the number of deaths illustrates a serious problem. "It sheds light on the fact that pushback is being applied. It is still a crime to send those people back, even if they can make it back to Turkey alive," Erçoban told AA. She says pushback was also taking place on migrant sea journeys, but has stopped, although the practice has continued on land. "Both Greece and Bulgaria are involved in this practice. Our figures show some 11,000 [illegal migrants] entered Turkey from Greece and Bulgaria, though not all of them were forced; we believe a substantial portion of returns are the result of pushback," she said, adding returns were mostly via Greece. Erçoban said taking legal action to help migrants forced to return was difficult, as they could not reach the victims. "There should be administrative and criminal sanctions, and the culprits should be found. Turkey should take steps against pushback if [Greece] adopted it as a state policy. We hear that they are being beaten with iron bars and sent back without their clothes. This is a crime," she added.

Every year, hundreds of thousands of migrants flee civil conflict or economic hardship in their home countries in hope of reaching Europe. Edirne is a primary migration route. Turkish Directorate General of Migration Management data reveals that most of the migrants come from Pakistan, Syria, Iraq and Afghanistan. The numbers increase in late summer and autumn before dropping in the winter months.

Temperatures hover near minus zero degrees Celsius in Edirne and other provinces at the border, which also saw heavy rainfall last week. Migrants usually take boats on the Meriç River, while some try to swim across to the other side. Early yesterday, police stopped 17 Pakistani migrants who were walking on train tracks near the border.