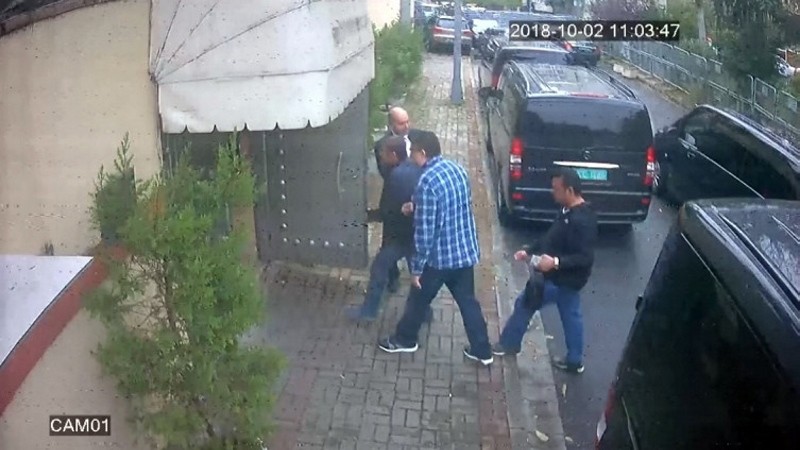 The footage, published by Anadolu Agency, showed several Saudis entering the perimeters of the consulate after arriving at Istanbul's Atatürk Airport.


Turkish investigators say a 15-men Saudi "assassination" team was sent to Istanbul to murder dissident Khashoggi and dispose of his remains.

The team suspected of carrying out the gruesome slaying includes a forensic doctor, a chemist, several Saudi military officials and the Saudi royal family's security details.

Khashoggi, a columnist for The Washington Post and a critic of Saudi Crown Prince Mohammed bin Salman (MBS), was reported missing by his fiancee Hatice Cengiz after entering the Saudi Consulate in Istanbul to obtain marriage documents on Oct. 2.

Khashoggi was killed in the consulate on Oct. 2 and Turkish authorities suspect his body was dismembered by the team.

Turkish officials have repeatedly offered the murder trial be held in Turkey where the crime was committed.

Saudi authorities have denied Turkey's requests and said the suspects will be tried in the kingdom. With the court's decision, Turkey could now issue an international arrest warrant for the suspects to be detained anywhere in the world.

The kingdom initially denied any role in Khashoggi's disappearance before acknowledging that he was murdered inside the consulate but passed the buck to rogue agents, while insisting that Crown Prince Mohammed bin Salman had no prior knowledge of the matter, an explanation far from convincing for many.

Evidence suggests Khashoggi upon entering the consulate was immediately strangled and then dismembered, presumably by a 15-person assassination team that arrived in Istanbul from Saudi Arabia and visited the consulate when the journalist was inside. His body is yet to be found. All of the identified individuals have since left Turkey. Saudi authorities launched an investigation against 21 people, detaining some of the suspects and seeking the death penalty for five.