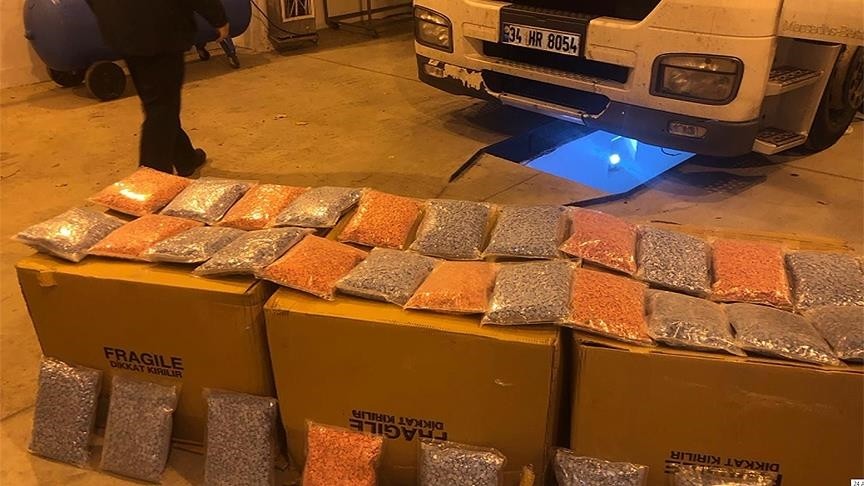 In their first narcotics operation abroad, Turkish police have seized 500,000 ecstasy pills that were loaded on a truck near the Serbian-Bulgarian border

Turkish narcotics police based in Istanbul carried the out the country's first cross-border operation against drug smugglers yesterday. Investigating an international network of smugglers, police, in cooperation with their Serbian and Bulgarian counterparts, raided a truck heading to Turkey from the Netherlands. Sifting through furniture and souvenirs in the truck's cargo, they discovered 500,000 ecstasy pills.

One unidentified suspect was detained in the operation, and police suspect more trucks may try to enter Turkey with drugs supplied by the same network using different routes.

Technically, this is Turkey's first cross-border land operation against drug trafficking, but Turkish security forces occasionally carry out narcotics operations in international waters. In January 2016, 13 tons of marijuana in powder form, reportedly to be distributed in European countries, was seized in a Bolivian-flagged vessel off the coast of Libya as the ship was heading to Turkey.

Turkish police are experienced at dealing with international drug trafficking, as the country lies on a transit route for drug smuggling between Asia and Europe. Security forces helped Italy seize 13 tons of drugs in a vessel off the coast of Italy in 2015.

A transit country for drug smuggling, which also fights against drug use, especially among youth, Turkey has stepped up its narcotics efforts in recent years. On Dec. 5, Turkish police made their largest-ever heroin bust of 1.2 tons when they stopped a truck on eastern Turkey's Erzurum-Erzincan highway.

The Interior Ministry recently announced that security forces carried out more than 134,000 narcotics operations this year and captured nearly 80 tons of cannabis, 19.6 million Captagon pills and 7.8 million ecstasy pills, along with more than 15.9 tons of heroin. The country blamed terrorist groups for the flourishing drug trade, especially the PKK which is accused of smuggling drugs into and from Europe as well as the cultivation of cannabis in southeastern Turkey as a way to fund its illegal activities.

Turkish authorities say the Netherlands is one of the European countries from which drugs are smuggled to Turkey, though Afghanistan dominates drug smuggling into Europe and Turkey. Turkey is the ultimate destination for chemical drugs from the Netherlands and other European countries. Ecstasy, amphetamines and prescription drugs were among the commonly seized drugs arriving from Europe.

A report by the European Monitoring Center for Drugs and Drug Addiction, a European Union agency, says the Netherlands is primarily a transit country for both heroin and cocaine. Heroin mainly originates from Afghanistan and is trafficked to the Netherlands via the Balkan route. The report also says the drug trade over the internet has emerged as a new business model in recent years. "With the amount of illicit drug trafficking on the dark net increasing, a considerable number of vendors reportedly operate from the Netherlands," the report says.