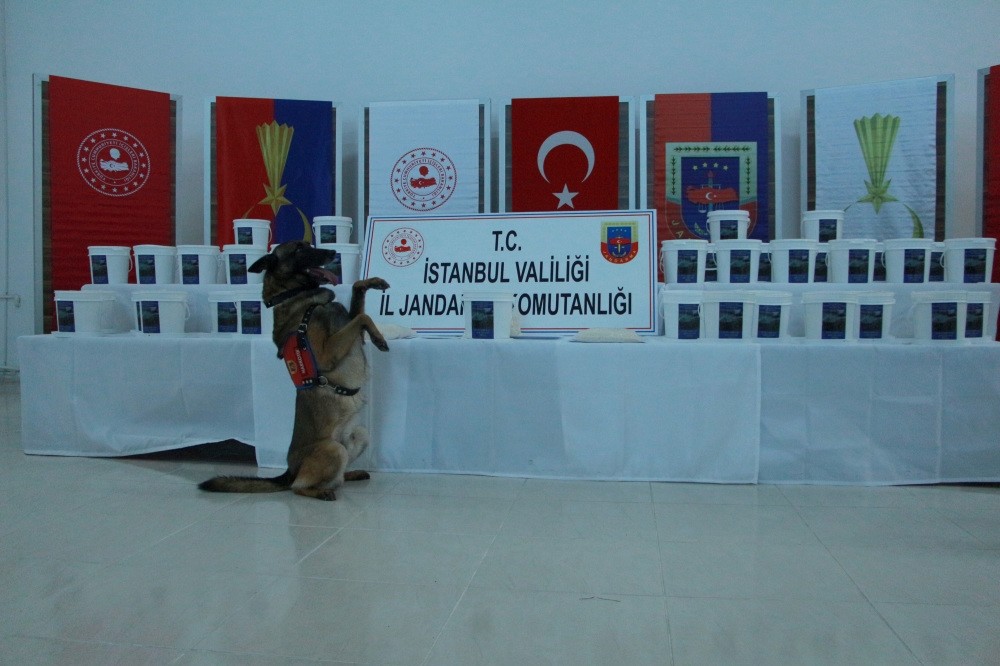 Narcotics police in Istanbul yesterday seized around 250 tons of raw materials for bonzai, a life-threatening synthetic drug that has swept the nation in the past few years

Security forces in Istanbul dealt a major blow to the plans of a suspect to produce 260 tons of bonzai, a synthetic drug popular among drug users in Turkey.

Gendarmerie forces in the city's Eyüpsultan district raided a car wash company where 260 kilograms of 5-fluoro, a synthetic cannabinoid that can be used for manufacturing tons of bonzai, was found. The suspect, who smuggled the substance from abroad and was planning to sell it to illegal drug makers, was arrested. Security sources say the suspect had a front company for imports and smuggled the substance from Asian countries hidden in imported goods.

Bearing the same name as the famous Japanese miniature trees, bonzai sounds "organic" as drug peddlers would claim. Yet, this drug, which recently emerged in Turkey, accounts for the majority of drug-related deaths. A report by the Turkish police directorate says at least 564 people died from bonzai use last year. Bonzai, described as synthetic cannabis, has similar characteristics to marijuana but is more destructive to the metabolism as it consists of synthetic materials. It causes rapid brain damage, with symptoms including schizophrenia-like behavior. The drug is also blamed for sudden heart failures. Doctors say that regular bonzai use often leads to kidney and liver failure within two months.

Bonzai, which has 200 different types, is better known as phenazepam in the rest of the world and believed to have first been developed in the Soviet Union during the 1970s.

The police report says it is smuggled into the country from a number of countries, including China. In Turkey, producers of the illegal drug add pesticide and similar substances to the drug to accelerate its effects. Thus, drug users face the risk of potentially fatal poisoning. The report says drug dealers do everything to show that bonzai is "organic" by combining it with sage, thyme, henna and cumin. Bonzai was classified as a recreational drug in Turkey and banned in 2011. Due to its cheap price, it has been popular among youths in particular. The authorities have stepped up the crackdown on bonzai dealers after images and videos of petrified-looking users of the drug on Istanbul streets made headlines in the past two years. In the first seven months of this year, 521 kilograms of bonzai were seized by counter-narcotics police.

Since 2014, when the country implemented a comprehensive action plan to escalate the war on drugs, Turkey has been fighting on multiple counter-narcotics fronts. It targets addicts through better rehabilitation and awareness campaign. It also targets smugglers and small-time dealers with more operations carried out by newly-formed "narco teams" that especially focus on operations around schools and other places where youths, the most vulnerable targets for drug peddlers, go.

Turkish narcotics police, based in Istanbul, carried out the country's first cross-border operation against drug smugglers on Dec. 24, seizing 500,000 ecstasy pills on the Serbian-Bulgarian border.The Interior Ministry recently announced that the security forces have carried out more than 134,000 counternarcotics operations this year. They captured nearly 80 tons of cannabis, 19.6 million Captagon pills, 7.8 million ecstasy pills, and more than 15.9 tons of heroin. The country blamed terrorist groups, the PKK in particular, for the booming drug trade. The PKK is accused of smuggling drugs to and from Europe as well as the cultivation of cannabis in southeastern Turkey to fund its illegal activities.