Turkish police crack down on Daesh cells in Ankara, detain 52 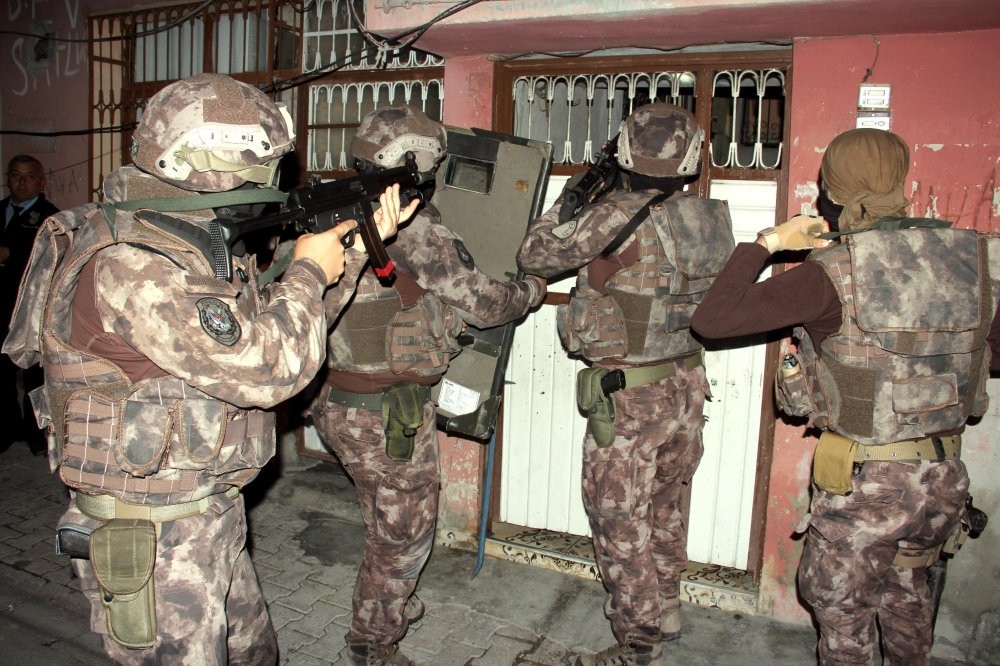 Special Operations police prepare to raid to a safe house occupied by Daesh suspects in the southern city of Adana on Apr. 29.
by Daily Sabah Dec 29, 2018 12:00 am

Counterterrorism police detained 52 suspects on Friday in a major crackdown against Daesh cells in Ankara, the seat of the government that seeks to eliminate the terrorist group responsible for a spate of attacks in past years

Turkey's crackdown on the terrorist group Daesh continued in the capital Ankara on Friday with prosecutors issuing arrest warrants for 64 people. Counterterrorism units of the Turkish National Police, aided by police intelligence, arrested 52, and operations were underway to capture the remaining suspects. The suspects were part of the Daesh network in Ankara. The Chief Prosecutor's Office in the capital said operations targeted the terrorist group's activities in the city, and police seized a gun, a cache of money and digital and print material containing the terrorist group's propaganda.

In the city's Altındağ district, police raided a building that appeared to function as an office building. Inside, they found a secret boarding house for children. Eight children between the ages of 10 and 16, who were apparently brainwashed to join the terrorist group, were taken into custody for questioning before they were handed back to their families.

A similar establishment that served as a secret school for children of suspected Daesh members was raided in Ankara last year by police as well, and police found 60 children inside. That school, originally home to Tevhid magazine, which is linked to the terrorist group, but was used as a school to teach Daesh ideology to the children and occasionally visited by Halis Bayancuk, a senior Turkish Daesh militant also known as Ebu Hanzala, who was arrested in 2017. Another school was discovered in Istanbul's Sultanbeyli district in 2016 where children of Daesh members who were killed or currently fighting in Syria and Iraq were being taught the militants' ideology.

Elsewhere, counterterrorism police detained 10 Iraqi Daesh suspects in operations in three districts of Samsun, a northern Turkish province, on Friday. Three Syrian nationals suspected of having links to Daesh were detained in Tekirdağ, a northwestern province, but they were later released with judiciary control.

Daesh, which is blamed for a string of terror attacks in Turkey over the past three years, saw a decline in membership with militants fleeing Syria and Iraq where it once controlled large swathes of land. Turkey helped Syrian rebels in a 2016 operation in war-torn Syria to regain control of Daesh-controlled towns. Some 2,000 people were arrested, and 7,000 others were deported in operations against Daesh in Turkey, while around 70,000 people were denied entry to Turkey over their suspected links to the terrorist group. Security forces have also foiled at least 10 attack plots. Figures show that some 18,500 suspects are currently being monitored for links to the terrorist group after being identified at airports upon arrival.

The terrorist group started building its de facto control in Iraq and later in Syria in 2014 through a campaign of violence, invasion and extreme brutality against residents. Following a period of expansion from 2014 to 2015, Daesh went into a gradual decline, with the U.S.-led coalition bombings. Daesh still maintains control of five towns in the countryside of eastern Deir el-Zor province and Homs in central Syria. Some Daesh militants are believed to have left areas now controlled by a Syrian affiliate of the terrorist group PKK, thanks to a controversial deal between the two.

Daesh members, mainly relying on foreign fighters as a source of recruitment though Turkish nationals, are also occasionally caught in operations against the terrorist group in Turkey.