Trial over assassination of Russian Ambassador Karlov begins in Ankara 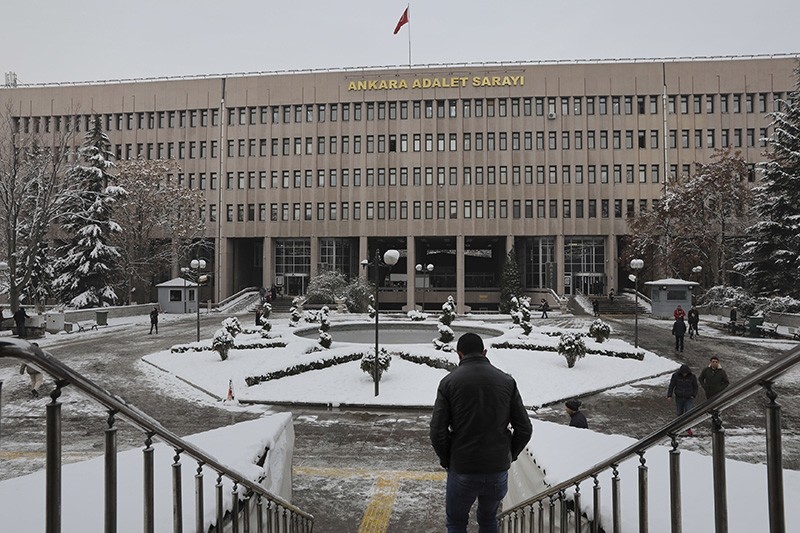 A trial of 28 suspects, including FETÖ leader Fetullah Gülen, in the 2016 murder of Andrey Karlov, the former Russian ambassador to Turkey, is underway in capital Ankara. Though a number of defendants admitted their links to the terrorist group, they also claimed they had severed ties before the murder took place

The trial of 28 suspects over the assassination of the former Russian Ambassador to Turkey Andrey Karlov began in Ankara on Tuesday morning.

Fourteen defendants, including a prominent member of the Gülenist Terror Group (FETÖ), Şahin Söğüt along with his wife Ayşe Söğüt, were brought before the Ankara Second High Criminal Court. Four others are participating in the proceedings via video stream from prison.

Karlov was killed on Dec. 19, 2016, by Mevlüt Mert Altıntaş, an off-duty police officer with links to FETÖ, in an art gallery in the capital Ankara.

The hearing, which is being covered by foreign press members, began with the identification of the defendants.

The 28 suspects indicted in the case face numerous charges including "attempting to eliminate the constitutional order," "aggravated murder for the purpose of terrorism," "membership in an armed terrorist organization."

Marina Mihaylovna Karlova, wife of deceased Russian envoy, along with three others were involved in an indictment as plaintiffs.

FETÖ leader Fetullah Gülen and seven other individuals are the prime suspects in the case. Along with Gülen, Şerif Ali Tekalan and Emre Uslu are prominent figures from FETÖ included in the indictment. All are currently living as fugitives in the United States.

Altıntaş was killed in a shootout with police in the gallery after the assassination. The indictment by the Chief Public Prosecutor's Office in Ankara detailed his connections to FETÖ, including Şahin Söğüt, an arrested member of the group who is accused of being a "big brother" or handler for Altıntaş on behalf of FETÖ. It was Söğüt who instructed Altıntaş to carry out the murder, according to investigators.

Security forces also arrested Timur Özkan, the curator of the exhibition Karlov was attending and Hayreddin Aydınbaş, the owner of a media company, for their links to FETÖ and the murder. Nine others including four police officers were also arrested over the murder.

The indictment includes digital evidence showing Altıntaş's connections to FETÖ. The evidence shows Şahin Söğüt met Altıntaş 10 days before the assassination and the same day, Altıntaş did online research about Russia. Other evidence shows connections between Özkan and Tekalan, a fugitive senior FETÖ member who is currently serving as a president of a U.S. university run by the terrorist group. Tekalan and Özkan had financial ties according to prosecutors.

Emre Uslu, a journalist who fled to the United States after an arrest warrant was issued by Turkey in a separate case, is accused of distracting suspicion from FETÖ's role in the murder on social media.

The prosecutors said in the indictment that Altıntaş originally first planned to kill Karlov at a dinner for ambassadors hosted by the Justice and Development Party (AK Party) on June 27, 2016, but scrapped the plan when Karlov did not attend and went on a trip abroad instead.

They added that FETÖ and "foreign powers that used the group" aimed to derail bilateral relations between Turkey and Russia through the assassination and "drive the countries to a possible conflict" as well as "create chaos ahead of July 15, 2016."

The assassination came at a time of thaw between strained Turkish and Russian relations. Since the murder, Ankara and Moscow have gradually made progress in rebuilding their ties that were disrupted by the 2015 downing of a Russian fighter jet over the Syrian border by the Turkish military.

On the first day of the trial, Bilal Dereli and Doğukan Söylemez, two defendants who were released pending trial earlier, testified regarding their ties to FETÖ. Both were police officers.

Dereli said he was first contacted by Gülenists after he entered the police training school in 2012 and said he attended "chats" with FETÖ members "a few times," claiming he stopped talking to them when the Gülenists found out he was not interested in their ideology. He also claimed that he did not have any ties with the murderer Mevlüt Mert Altıntaş, who attended the same school as him.

Söylemez said Kaan Bülbül, one of the other defendants in the case, used to "spread FETÖ propaganda" at the police school he attended with Dereli and Altıntaş but denied he joined that the terrorist group, "despite the insistence" of the Gülenists.

On a passage in the indictment that says Altıntaş looked him up online before the murder, Söylemez said he had no contact with Altıntaş and knew him only back in the school.

FETÖ members and their U.S.-based leader Gülen are the main suspects in the case. They face a long list of criminal activities, of which the most serious is the July 15, 2016, coup attempt that killed 251 people and injured 2,200 others.

The coup attempt, that came three years after two other failed attempts to overthrow the government, was the work of FETÖ's military infiltrators. FETÖ is known for its widespread infiltration of Turkey's law enforcement, military, judiciary and bureaucracy.