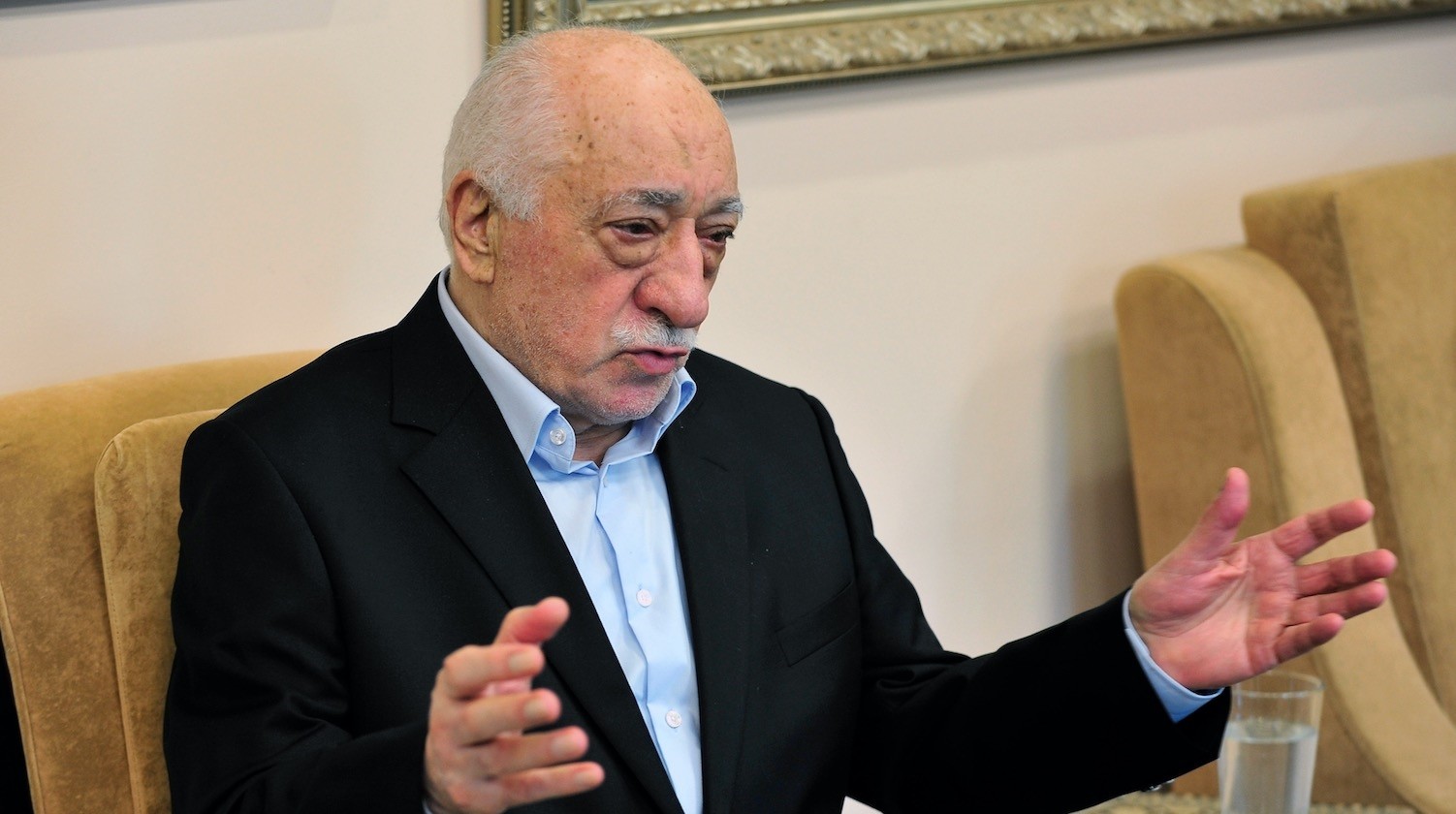 Fetullah Gu00fclen, the leader of the FETu00d6, speaks to media two days after the July 15, 2016 coup attempt. Gu00fclen who lives in the United States, controls a large number of followers all across the globe.
by Daily Sabah with AFP Jan 21, 2019 12:07 am

The FETÖ terrorist group has long been active in Germany, but the country, with its policy tolerating the group's members, is now serving as a European hub for the group in the aftermath of its thwarted 2016 coup attempt in Turkey, which was followed by the mass flight of Gülenists from Turkey

The Gülenist Terror Group (FETÖ), which is accused of carrying out the July 15, 2016 coup attempt in Turkey, owns schools and similar establishments in Germany, as it does in other countries around the world. Yet, there is increasing evidence that the group has chosen the country as its new center, a report by Agence France-Presse (AFP) says. Hundreds of FETÖ members fled to Germany after the coup attempt that killed 251 people, although FETÖ-linked institutions there are careful to hide their affiliation with the terrorist group. Media reports say that there are about two dozen private schools and some 150 "tutoring centers" run by the terrorist group. An unknown number of unofficial dormitories (light houses as they are known in Turkey) also exist in big cities of Germany.

FETÖ, which disguised itself as a religious movement for a long time before it launched its first bid to seize power by a coup attempt in 2013 in Turkey, is still viewed as such a movement in Germany. Although anti-Islamic circles in the European country criticize them in this aspect, it is apparently embraced by the German government which has been accused of turning a blind eye to FETÖ in the past by Ankara. Bruno Kahl, head of Germany's Federal Intelligence Service (BND), had even described it as a "civil organization" in a 2017 statement. The only negative outcome of the coup attempt for FETÖ apparently has been families taking away their children from the group's schools in Germany.

Elsewhere, the group has enjoyed a safe haven in the European country, especially for high-profile members like Zekeriya Öz and Celal Kara, two renowned prosecutors linked to the group. Both are wanted in Turkey for membership of a terrorist group and Turkish media had claimed that they were protected by German intelligence in unknown location. Öz and Kara were behind a string of sham trials in Turkey that helped FETÖ to imprison its critics. Ankara had sought their extradition but Berlin had claimed there was no information about their whereabouts. Adil Öksüz, a more important figure of the terrorist group, is also believed to be in Germany or at least stayed there for a while. Öksüz is accused of masterminding the coup attempt in 2016 upon the instruction of FETÖ's US-based leader Fetullah Gülen and remains at large since the coup attempt was quelled.

Germany also serves as a shelter for staff of FETÖ-run schools in other countries, the AFP report says. A number of teachers working at those schools who faced extradition to Turkey were granted asylum in Germany while a FETÖ-linked association in Berlin took control of a school chain in Ethiopia in 2017 before the schools were about to be handed over to the control of Turkish authorities.

Turkey and Germany recently revived their stalled relations and Spiegel had reported that the German Embassy in Ankara, had detailed FETÖ's activities in a February 2018 report which said the group had infiltrated the Turkish state. Yet, the German government remains one of the sponsors for House of One, a multi-faith project FETÖ is involved in.

Ulla Jelpke, a German MP who spoke to AFP, is among those calling for "an end to preferential treatment" for FETÖ. She says Germany should start legal procedures if there is evidence that FETÖ members are involved in crimes, calling authorities to investigate if there are any [FETÖ members] in Germany involved in the 2016 coup attempt in Turkey. Jelpke says [FETÖ] was courted by the German government and she suspected that Germany wanted to "keep" the group's members so that they can return once the current presidency in Turkey is gone.

Along with being embraced by Berlin, FETÖ members find assistance from fellow members of the group in the form of a non-profit that seemingly aims to help "refugees." Aktion für Flüchtlingshilfe (Aid Action for Refugees), linked to FETÖ, helps the group's members arriving from Turkey to learn German and find jobs and accommodation in the country. Group members who give interviews to German media outlets confirm an exodus of Gülenists from Turkey to Germany in the aftermath of the thwarted coup attempt two years ago. Some senior figures in the group, such as Abdullah Aymaz and Mehmet Ali Şengül, who are among the most wanted terror suspects by Turkey, are known to be in Germany. Aymaz, who joined FETÖ while its leader Fetullah Gülen was still an obscure preacher working in İzmir in western Turkey, is a member of Gülen's inner circle. The Turkish media describe Aymaz as the "Europe imam" for FETÖ, a name given to senior figures in the group in charge of dozens and sometimes thousands of followers. He left Turkey shortly after FETÖ's first coup attempt in 2013 failed. A few months before the 2016 coup attempt, Aymaz penned an article in a FETÖ-linked newspaper, hinting at an imminent coup. Mehmet Ali Şengül, another high-ranking figure in the terrorist group, was one of the names to replace Gülen in case of the latter's death, according to reports in the Turkish media.

Turkey, meanwhile, seeks to convince the international community about the danger FETÖ poses. Turkish Vice President Fuat Oktay said in a televised interview yesterday that Turkey "broke the back" of FETÖ but the struggle was "not over yet," especially in terms of group's presence abroad. "We cannot say it is wiped out abroad. For instance, its leader is still in the United States and the group continues its activities in many countries. We tell other countries hosting them [FETÖ] how it is dangerous not only for Turkey but also for them," he said.