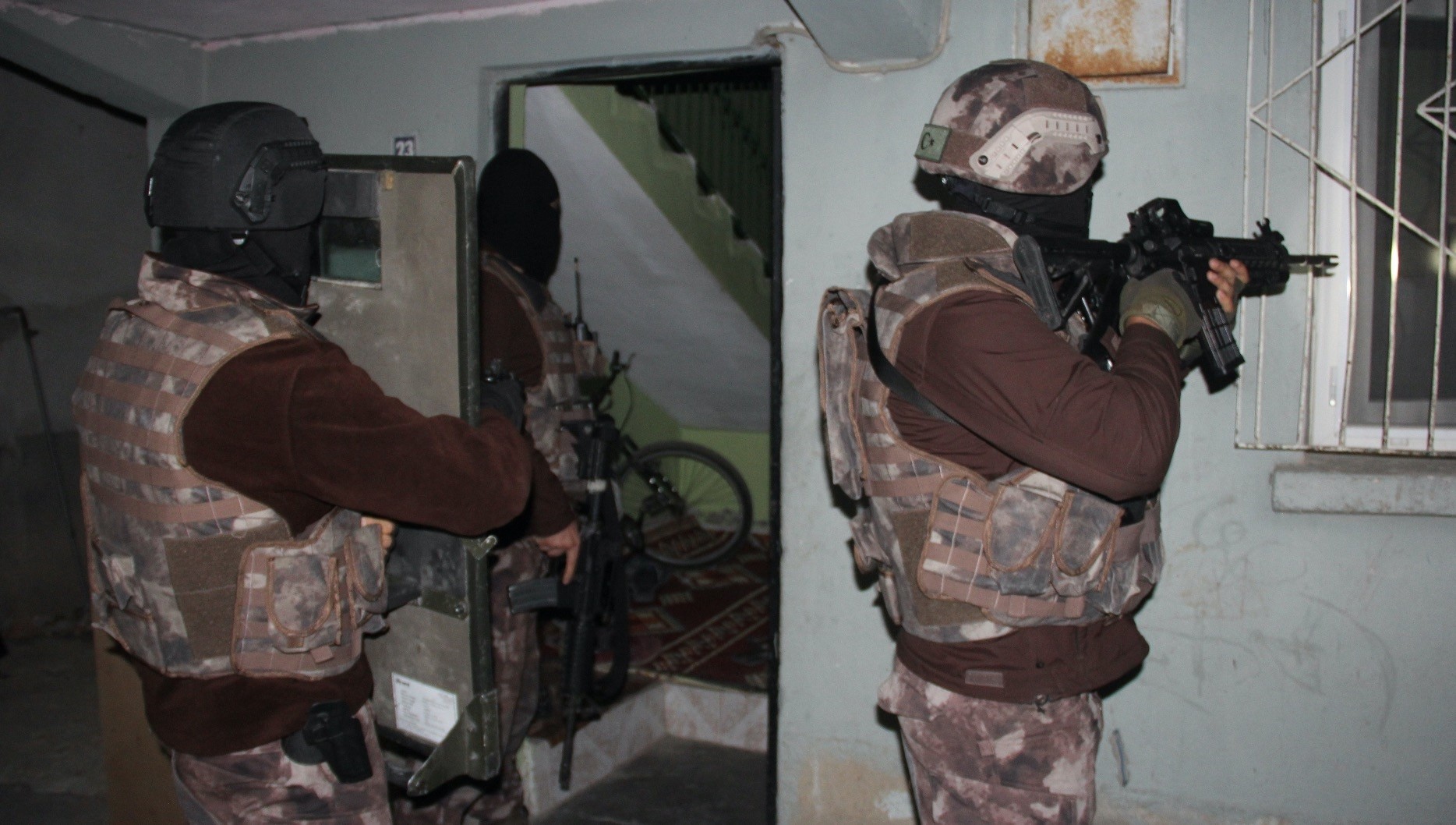 Counterterrorism police raid a house to capture Daesh suspects in the southern city of Adana in this undated photo. Some 2,000 suspects were arrested and 7,000 others were deported in operations against Daesh.
by Daily Sabah with AA Feb 04, 2019 12:07 am

Turkey's crackdown on the Daesh terrorist group netted dozens of suspects last month, the latest figures indicate; from an ‘emir' to those trying to enter Syria from Turkey and those attempting to sneak into Turkey from Syria

A total of 36 Daesh suspects were remanded in custody, while some 87 others were arrested for their alleged links to the terrorist group across Turkey in January. As the country struggles to eradicate the group active in its neighbors Syria and Iraq, Turkish security forces continued their long-running nationwide campaign to thwart terror attacks. Seven suspects were remanded in custody in southern Adana province. Murat Yerlikaya, who came from France to Turkey, was remanded in custody after being held in central Kayseri province for planning an attack during New Year's celebrations.

Also in Kayseri, a court remanded a foreign national in custody after he was arrested for allegedly trying to go to conflict regions in Syria.

Forty Daesh suspects were arrested during operations carried out in the provinces of Sakarya in the northwest, Elazığ, Gaziantep and Batman in the eastern and Samsun, a northern province. Two of them were remanded in custody, and 13 were deported.

Separately, 18 people were arrested for their alleged links to Daesh during anti-terror operations in Tekirdağ, Hatay, Samsun, Kayseri and Karabük provinces. Fourteen were remanded in custody, two were deported and two others were released under judicial control.

Two people were remanded in custody after being arrested in an operation in southeastern Kilis province, which borders Syria.

Moreover, 12 suspects, including those wanted by France for their links to Daesh, were arrested by anti-terror police teams in western Bursa province. Five were arrested.

Two suspects wanted by France - a French citizen and a Moroccan-French citizen told police they set up a Widows' Foundation to keep an eye on the wives of Daesh militants killed in Syria.

One suspect was remanded in custody in southeastern Şanlıurfa province during an operation against Daesh.

Another Daesh member, a Russian citizen of Azerbaijani origin, was sentenced to six years and three months in prison by a court in Kocaeli province.

Konya was the scene of a bloody raid against Daesh in 2017 where five militants hiding in a house were killed in a shootout with police. The Konya "emir" was detained after a suspect arrested months after the Konya shootout identified him as a senior figure in the group.

In this month's first operation against Daesh, a Turkish army border patrol captured four suspects, including one sought with a red notice who was attempting to illegally cross the Turkish-Syrian border, near southeastern Şanlıurfa province.

An investigation revealed that there had been arrest warrants for the suspects under the scope of terror probes. There was a red notice issued for one of the suspects identified as Feride Samur, Anadolu Agency reported.

Daesh, which is blamed for a string of terror attacks in Turkey in the past few years, saw a decline in membership with militants fleeing Syria and Iraq where it once controlled large swathes of land. Some 2,000 Daesh suspects were arrested and 7,000 others were deported in operations against Daesh in Turkey, while around 70,000 people were denied entry to Turkey over their suspected links to the terrorist group.

Security forces have also foiled dozens of terrorist attack plots. Figures show that some 18,500 suspects are currently being monitored for links to the terrorist group after being flagged at airports upon arrival.