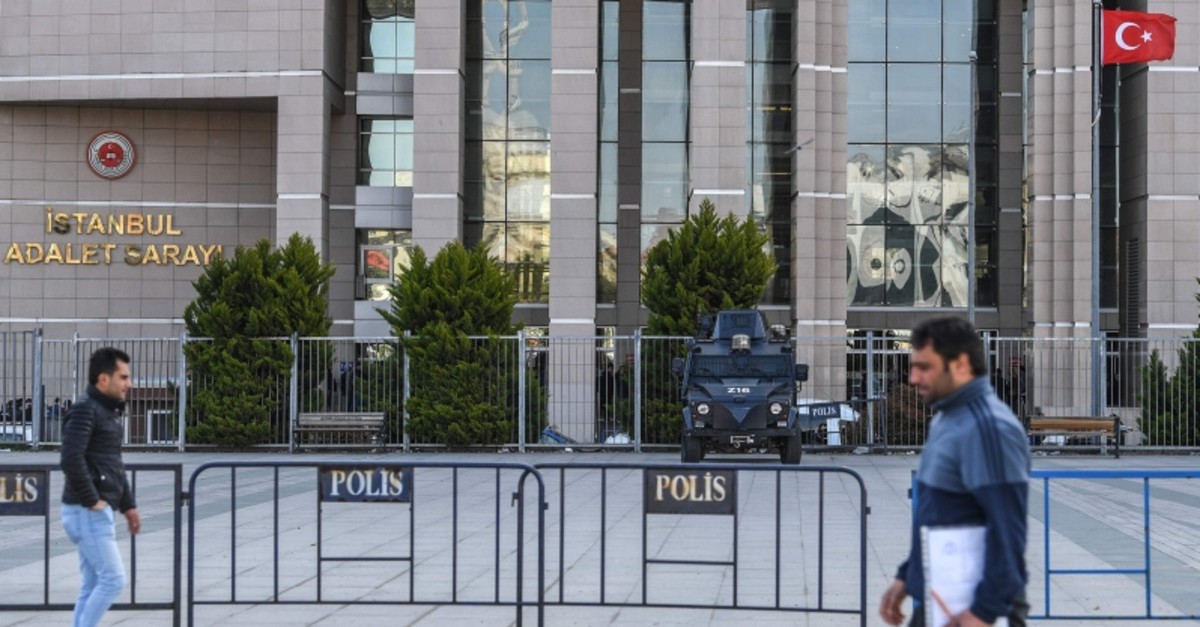 People walk past an armed Turkish police vehicle standing outside the courthouse in Istanbul on March 28, 2019, during the trial of Metin Topuz, a US consulate staffer accused of spying and attempting to overthrow the government. (AFP Photo)
by Compiled from Wire Services Mar 28, 2019 5:22 pm

A court in Istanbul ruled on Thursday that a Turkish employee of the U.S. Consulate should remain in custody pending the outcome of his trial on charges of espionage and attempting to overthrow the Turkish government.

Metin Topuz, 59, a translator and assistant for the U.S. Drug Enforcement Agency (DEA), is accused of links to the Gülenist Terror Group (FETÖ), which staged the July 15, 2016 coup attempt that killed 251 people and injured 2,200 others.

Topuz has been held in pre-trial detention for nearly a year and a half and faces a life sentence if convicted.

He told the court in the opening hearing on Tuesday that he "never had any relations with the treacherous group," in reference to the FETÖ.

"We did not see today in this hearing any evidence of criminal wrongdoing on the part of Metin Topuz," the U.S. Consul General in Istanbul, Jennifer Davis, told reporters Thursday. "We reiterate our government's call for the swift and fair resolution of this matter."

"Under normal circumstances, he should have been released based on the evidence presented to the court," lawyer Halit Akalp told reporters in Istanbul's Çağlayan Courthouse.

According to his indictment, Topuz is accused of espionage as well as arranging arms trafficking through exchanges on the Whatsapp messaging service.

The trial was adjourned until May 15.

Topuz's arrest in October 2017 led to the suspension of bilateral visa services between the U.S. and Turkey for more than two months and is one of several contentious issues that have increased tensions between Ankara and Washington. The court's interim decision could further strain ties between the two NATO allies.

A top U.S. official in February said the diplomatic mission's "single most important priority" was securing the freedom of "our unjustly detained employees."

Mete Cantürk, another Turkish employee of the consulate, is under house arrest in a related investigation. Hamza Uluçay, a Turkish translator of the U.S. mission in southern Adana province was convicted of terror-related offenses earlier this year but released from prison.

Turkey, on its part, accuses the U.S. of harboring the FETÖ, which operates a vast network of charter schools and businesses in the country, and its leader Fetullah Gülen, who lives in a self-imposed exile in the U.S. state of Pennsylvania since 1999.

The trial has begun at a time when the U.S. and Turkey are increasingly at odds over their Syria policy and Turkish purchase of Russian S-400 missile defense system.

Ankara's decision to buy S-400 missile systems from Russia has provoked warnings from Washington that the deal may impact its sale of U.S.-made F-35 fighter jets to Turkey and trigger sanctions.