Sniffer dogs on front line in fight against drugs 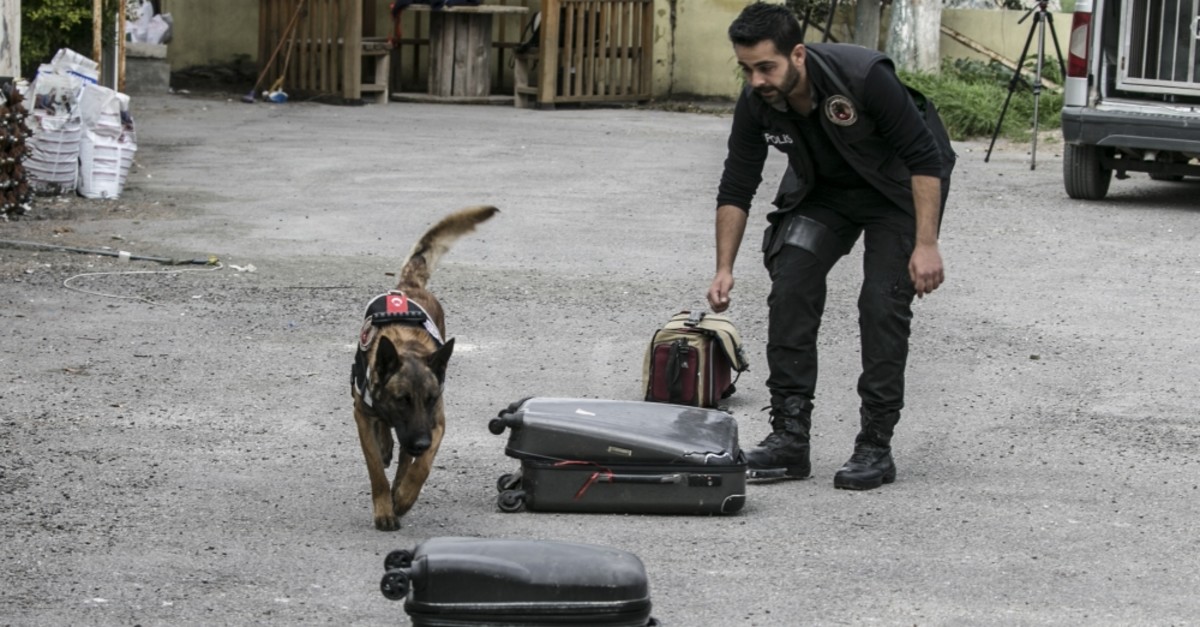 Dante, Akrep, Rüzgar and Ares are the most reliable partners of the counter-narcotics police in southern Turkey's Hatay, a province on the border with Syria where the fight against drugs is raging. Using their phenomenal senses in the service of the police, the four dogs challenge drug smugglers to come up with new ways to hide their drugs. Dante is credited with helping local police in one of the biggest drug busts by detecting 1 ton of drugs in one operation, and his partners prove to be just as feared as he is by criminals, thanks to their training.

These dogs can respond to about 150 commands by their trainers and successfully comb every nook and cranny, finding spots where drugs are hidden, out of plain sight. They help relieve their human colleagues from extra burdens and costs in their search for drugs. 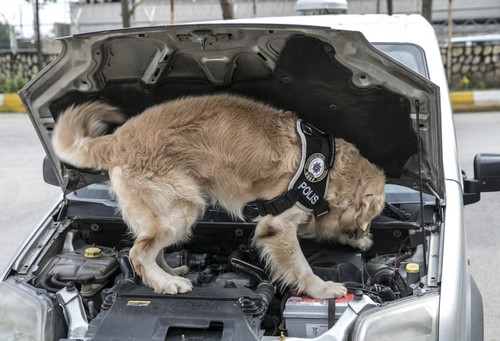 The training includes search of drug stashes in cars.

The quartet occasionally switches assignments from downtown Hatay to border crossings and areas near the border, far from the city center, as and when the job requires. Hatay's location next to lawless a Syria mired in a civil war makes it a favorite destination for drug smugglers who sneak synthetic and "organic" drugs like cannabis in and out of the country. Smugglers often stash drugs in places they think they cannot be detected by sniffer dogs and some even turn to cover the drugs with garlic, fish and other things that make it difficult for dogs to separate their odor from the smell of drugs. Still, these things only delay the detection time for sniffer dogs. The most common hiding spots for drugs are fuel tanks of trucks and cars used in the transportation of drugs and these are the first places Dante, Akrep, Rüzgar and Ares usually head to in counter-narcotics operations.

Ömer Faruk Uzun has been training Dante, a golden retriever, for six years. A veteran sniffer dog trainer, Uzun spent 16 years of his 27-year police career as a dog trainer. Uzun was stationed in Balıkesir in western Turkey when he first met Dante in 2012, while the latter was 2 months old. He took him under his wings and trained Dante every day. Today, he spends eight hours a day with Dante, who he also worked with in Balıkesir and the southeastern city of Diyarbakır. "Together, we made successful busts everywhere we worked. We seized some 60 tons of drugs in Diyarbakır and 5 tons of drugs in Hatay. He also helped in seizing 1 ton of drugs in one instance here in Hatay, at the Cilvegözü border crossing [with Syria]," Uzun told Anadolu Agency (AA). Uzun, a father of two, says Dante has been his "third son" and they have formed a very strong bond.

Sadık Akyürek is trainer and partner of Akrep (Scorpion in Turkish), a Belgian shepherd he has worked with for the past eight years. Akrep was a puppy when they first started training and is now a grown member of canine law enforcement, making his human colleagues proud. Akyürek, like Uzun, worked with Akrep in counter-narcotics operations in Turkey's southeast and their friendship continues in Hatay where they have been stationed since 2015. "Akrep and other dogs make up an intimidating force against drug smugglers, particularly those trying to smuggle drugs through the border," Akyürek says. He says training is key to sharpen the dogs' senses. "They are as young as 2 months old when the training starts. We first teach them how to 'play around' so that they can get accustomed to tougher tasks. Playing sessions go together with training to distinguish scents and on how to effectively use their nose [to detect drugs]. It takes another six months of training for them to obey the commands, from teaching them to sit and wait on command and commanding them to search," he says.

Akrep boasts of finding 6 tons of drugs for the police so far. Mehmet Tekin, the trainer of Rüzgar [wind in Turkish] is a newcomer to dog training but he says he enjoys every moment. Rüzgar, like him, is a newcomer to the field but the two are very close since Rüzgar is the puppy of a dog Tekin owned. "The first rule in training is bonding with the dog. It is a tiring but exciting process. I teach him every command he needs to know and he feels like a family member to me now," Tekin says.