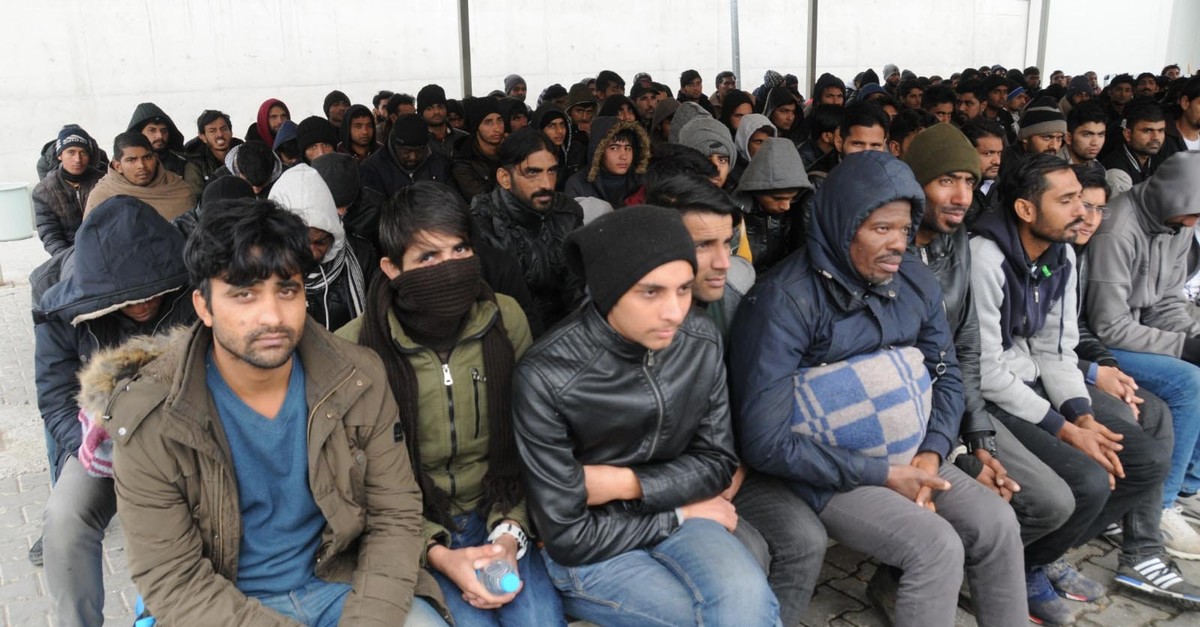 Migrants stopped near the border wait for transfer to a migrant center in Edirne in this undated photo.
by Daily Sabah with Agencies Apr 05, 2019 12:15 am

In the first three months of this year, more than 16,000 illegal migrants were stopped in Edirne, a northwestern province on the border with Greece that is teeming with migrants seeking to cross into Europe despite security measures

Checkpoints are set up, troops scour abandoned buildings and sparse woodlands all the way to barbed wire fences separating the two countries, Turkey and Greece. But the border remains as busy as ever when it comes to illegal migration.

Some 16,318 illegal migrants were stopped by security forces in the first three months of 2019, and the number is expected to increase if the weather, as expected, gets warmer later this month.

Most arrive in buses and minibuses in towns near the border or downtown Edirne. From there, they walk in small groups on pathways near the small villages, occasionally hiding in shrubs and orchards to avoid detection. Few are able to reach the border, though, thanks to constant patrolling by border guards along a vast stretch of land, and those lucky enough to reach the "forbidden military zone" on the border are stopped before they can scale the fences and get to the banks of the Meriç River separating the two countries. Migrants usually take boats on the river, while some try to swim across to the other side.

Going after illegal migrants take up a considerable part of gendarme troops' shift on the border. The gendarme, which serves as law enforcement in rural parts of the country, go village to village regularly to find migrants, while some are intercepted thanks to tipoffs by locals. In downtown Edirne, plainclothes police and uniformed officers are on alert for migrants and occasionally visit budget hotels and parks where migrants might stay for a rest before a long walk to the border. Anyone without paperwork and a passport are intercepted and handed over to the local migration authority, which is tasked with processing them before sending illegal migrants back to where they come from.

On the road to Edirne and roads of villages near the border, gendarme troops maintain round-the-clock checkpoints, searching vehicles for hidden migrants. At the city's main bus terminal, police are always on alert against passenger buses arriving from other cities. Social media, meanwhile, is swarming with migrants setting up groups to exchange information on how to sneak into Greece. Users share their experiences on how to dodge authorities, how to contact smugglers and how much to pay.

Figures show Pakistani and Afghan nationals make up the majority of illegal migrants captured in Edirne. They are followed by citizens of other countries, from Africa and the Middle East, particularly from Syria, Turkey's southern neighbor where an ongoing conflict has displaced millions of people.

The border in Edirne is better policed compared to the Aegean coast of Turkey where the Turkish Coast Guard struggles to stop dinghies departing from the long coastline for nearby Greek islands. Still, desperate migrants prefer the land border, especially in the winter months when a safe journey through the Aegean is nearly impossible.

The journey to Europe for migrants does not end once crossing to the Greek side for some migrants. A Human Rights Watch report and accounts of illegal migrants caught on the border show that Greek security forces routinely return migrants to Turkey in violation of international law. The notorious practice called "pushback" is suspected of causing the deaths of at least four migrants found frozen to death near the border in December. Under international laws and conventions, Greece is obliged to register any illegal migrants entering its territory. Figures reported by Turkish media outlets say that hundreds of migrants were "pushed back" last year, and some were subjected to mistreatment by Greek security forces, ranging from beatings to being forced to go back half naked to the Turkish side. Greece, which has struggled to cope with the huge influx of migrants, especially after the civil war in Syria displaced millions, has also been criticized for decrepit conditions in refugee camps on its Aegean islands.