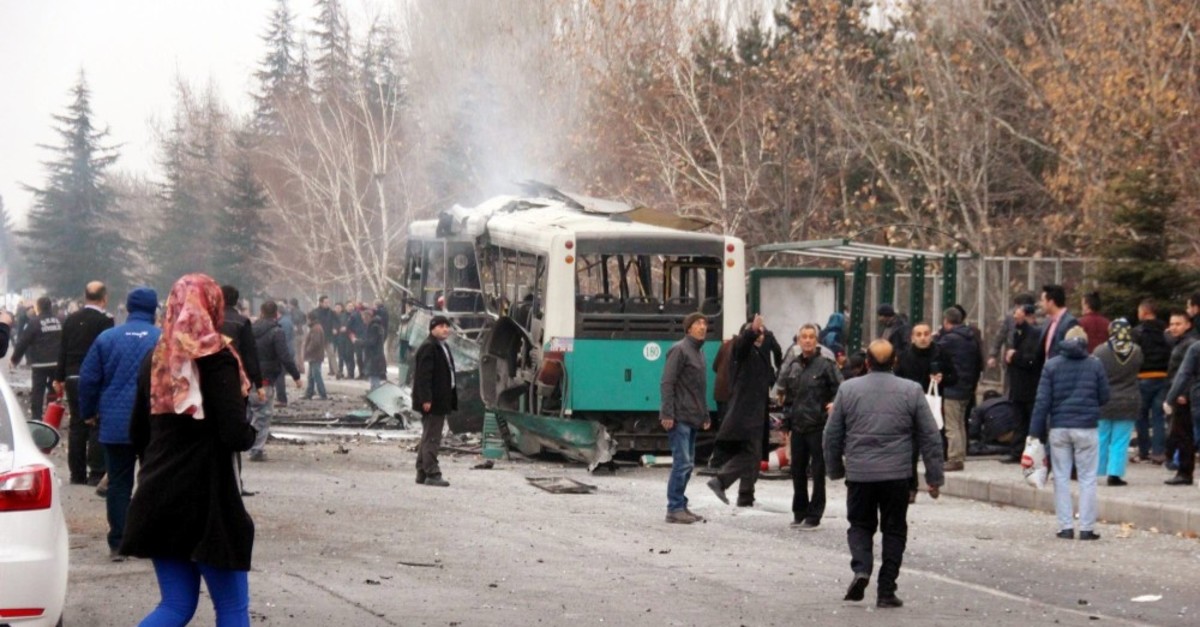 Kenan Çiçek, a PKK figure accused of orchestrating a deadly bombing that killed 15 off-duty soldiers three years ago, was sentenced to 16 instances of aggravated life imprisonment in a hearing on Friday

A court in the central city of Kayseri where 15 off-duty soldiers were killed in a suicide car bombing by the terrorist group PKK, handed down 16 instances of aggravated life imprisonment for Kenan Çiçek, the alleged mastermind of the car bombing.

Fifty-four soldiers were also injured when PKK militant Kasım Yıldırımçakar set off his car bomb next to a bus carrying soldiers on a weekend leave on Dec. 17, 2016. Soldiers, all conscripts, were members of a commando unit hailed for their counterterrorism operations.

Çiçek was among the 21 defendants tried for the attack and the only one in prison while 17 others were released pending trial earlier. Three other defendants remain at large. He did not attend the trial while plaintiffs including the families of slain soldiers packed the courtroom.

The court charged Çiçek with one instance of committing a terrorist crime and 15 instances of murder charges. Lesser prison terms were handed down to Çiçek for possession of explosives and membership of a terrorist group. He will essentially stay in prison until death as multiple sentences rule out eligibility for parole for defendants in terror-related cases. Two other defendants in the case who were accused of helping Çiçek and fugitive defendants with forgery of documents to hide their tracks were sentenced to prison terms between four and six years. Others received prison sentences ranging between two and seven years for membership of a terrorist group and aiding and abetting terrorists.

Prosecutors asked for a separate trial for İshak Özçaktu and two other fugitive defendants. Özçaktu, known with his nom de guerre Erhan Porsibi, is charged with ordering the attack in Kayseri. He is one of the senior figures of the terrorist group and implicated in ordering similar PKK attacks in Ankara and Istanbul. His name last came up in an investigation into an attack plot by the terrorist group targeting Turkuvaz Medya, the parent company of Daily Sabah. A captured member of the PKK confessed to prosecutors a few months ago that the group plotted to carry out an attack targeting the headquarters of Turkuvaz Medya, where Daily Sabah offices are also located. The suspect said they canceled the "sacrifice" attack, a term used by the group to describe suicide attacks, upon seeing heavy security around the building in Istanbul, believing they would not cause as many casualties as they wanted. The PKK member identified as İhsan Köçeroğlu has said Porsipi instructed him to plan the attack. The PKK "cell" that instructed Köçeroğlu was also behind the terror attack that killed 44 people outside Vodafone Park, a stadium located a few kilometers from the Daily Sabah offices, seven days before the Kayseri attack.