Over 140 suspected infiltrators of FETÖ in military, police nabbed 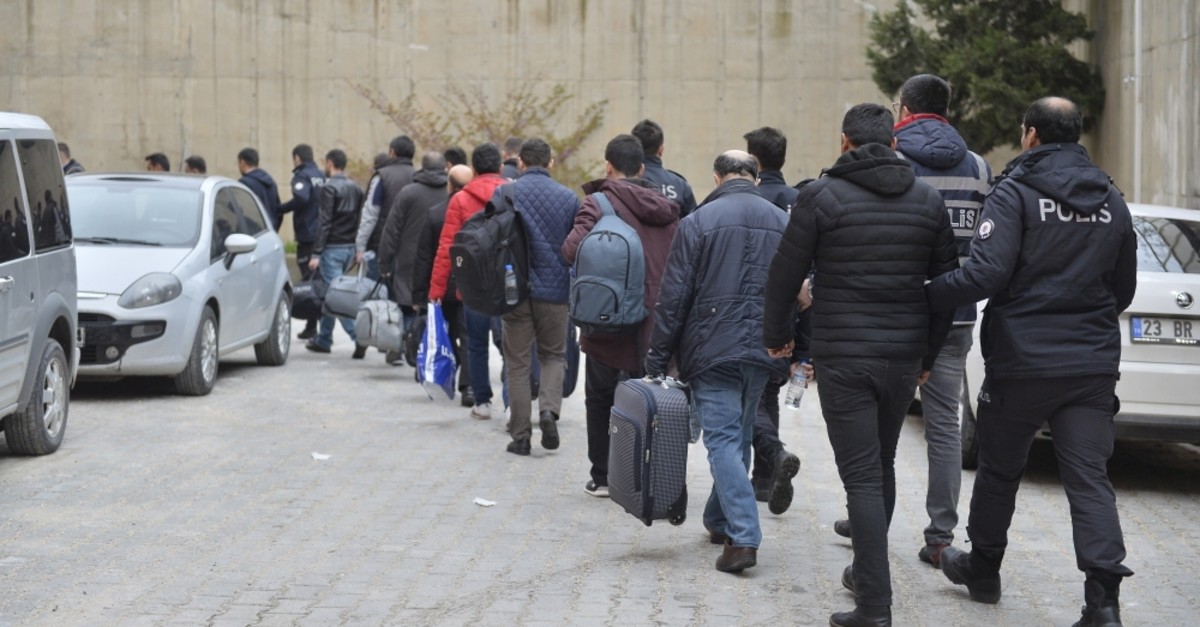 Police escort captured suspects to a police station after an operation against FETu00d6 in the province of Mardin, April 20, 2019. FETu00d6 faces operations almost on a daily basis after the 2016 coup attempt.
by Daily Sabah Apr 27, 2019 12:03 am

The Gülenist Terror Group (FETÖ) faces a new wave of arrests three years after it tried to seize power. Some 142 suspected members of the group working in the military and law enforcement were detained in nationwide operations and a manhunt was underway to detain more when Daily Sabah went to print late Friday.

FETÖ is accused of carrying out the July 15, 2016 coup attempt that killed 251 and injured thousands of others. Prosecutors say the group employed its infiltrators in the Turkish Armed Forces to overthrow the government. In Istanbul, the Chief Prosecutor's Office issued arrest warrants for 210 active-duty soldiers on Friday, and 115 suspects were arrested in operations.

Among the captured suspected FETÖ infiltrators were five colonels, seven lieutenant-colonels and soldiers in lower ranks. The prosecutor's office issued a statement on its investigation and highlighted that FETÖ carried out the coup attempt with "its cells of two or three members" who had infiltrated into the army that did not know each other's affiliation with the terrorist group, adding that "brothers" or "imams," FETÖ's handlers for military infiltrators, instructed the soldiers they commanded to take action to overthrow the government. The statement underlined that the number of FETÖ infiltrators in the Turkish Armed Forces (TSK) was "far higher" than those who joined the putsch bid, and they remain the "biggest threat to constitutional order." Friday's operations were part of a wider investigation into the group's secretive communications with its infiltrators. Several probes had already been launched into civilian handlers of FETÖ accused of contacting infiltrators through payphones to avoid detection and since 2017, Istanbul prosecutors have issued arrest warrants for 1,963 suspects in touch with the group's handlers. A total of 261 among them remain at large, while 459 captured suspects collaborated with authorities and helped facilitate the capture of 1,045 other suspects linked to the terrorist group.

In the central city of Konya, prosecutors issued arrest warrants for 50 suspects who were accused of being part of FETÖ's "secret military network." The suspects include 30 active-duty soldiers. Fifteen among the wanted suspects were captured in operations in Konya and numerous other provinces.

In other operations against the terrorist group, the Chief Prosecutor's Office in the capital Ankara ordered the arrests of 41 suspects linked to the group, and 12 were captured. The suspects were wanted for leaking questions and answers to a 2009 exam for Police College, a prestigious law enforcement school where future police chiefs are trained. All wanted suspects were admitted to Police College by receiving questions and answers to the admission exam beforehand, courtesy of a scheme by FETÖ. FETÖ is implicated in a string of cheating allegations for public exams. The group is accused of using the exams as a stepping stone to the public sector, where many of its members found jobs. Several members of the terrorist group were already convicted of mass cheating on a nationwide exam for civil servants. Multiple investigations into the group's methods for cheating found that FETÖ leaked questions and answers to young members, either handpicked by the group's leaders or eager to join the public sector. Former members of the group had testified in other cases that "brothers" or "imams," point men and handlers for FETÖ, provided them questions and answers for the exams. Civilians are believed to have gained access to well-protected questions and answers through infiltrators in bodies tasked with organizing the exams. The Ankara Chief Prosecutor's Office launched investigations concerning another police exam cheating scam after the 2016 coup attempt. It had already issued arrest warrants for dozens of suspects. A total of 1,112 suspects were identified when all of them gave the same answers to the same 13 questions whose answers were actually misprinted, demonstrating that they had memorized the questions and answers beforehand. Their names also matched a database of Gülenist police officers found in the possession of a former FETÖ member who confessed his ties to the terrorist group.

Thousands of people were arrested or detained following the 2016 coup attempt in the biggest crackdown against the terrorist group, which tried to seize power twice in December 2013. However, top figures of the terrorist group, including its leader Fetullah Gülen, still remain at large.