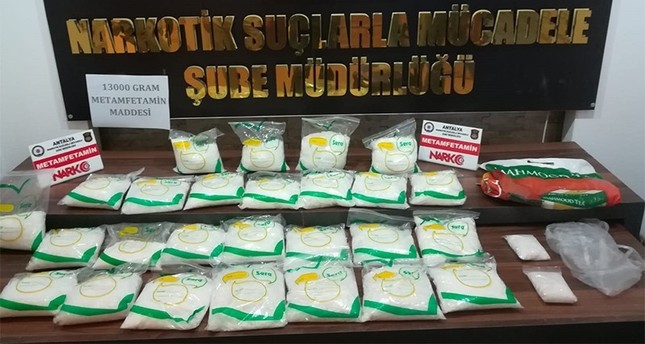 Turkish security forces on Thursday nabbed a couple who was storing a cache of methamphetamine in their clothing shop in southern Turkey's Antalya province.

Acting upon a tipoff, the anti-narcotics branch of the provincial security directorate conducted a search in a store belonging to a suspect identified as M.Ş.T.

Thirteen kilograms (28.7 pounds) of methamphetamine were seized in boxes found in the store.

The suspect was detained along with his wife N.T. and his child I.T.

The husband and wife were later arrested by a court and I.T. was released pending a trial.

The provincial security directorate said in a statement that the seizure was the largest amount of methamphetamine that has been confiscated by security forces in a single operation in the city.

Meanwhile, in southern Adana province, security forces seized 11 grams of methamphetamine hidden in the fuel tank of a vehicle.

Three suspects were detained in relation to the incident, and two of them were later arrested by a court.

In a separate operation in Istanbul, security forces seized 8 kilograms (17.6 pounds) of heroin, detaining one suspect who is a foreign national.

An investigation had revealed that the suspect was about to send the drugs abroad.

The provincial gendarmerie forces followed the suspect after he left a hotel in the Silivri district and took a taxi. Security forces stopped and searched the vehicle on a road that runs to northwestern Edirne province.

The drugs were found in a suitcase belonging to the suspect with the help of a sniffer dog named "Vadi."

The suspect was later arrested by a court.

Turkey, a transit country for drug smugglers working between Asia and Europe, is looking to curb domestic drug use. In 2014, the Turkish government launched "The Rapid Action Plan Against Drugs" to counter drug abuse and smuggling. Since then, Turkey has been fighting on multiple counter-narcotics fronts. It targets addicts through better rehabilitation and awareness campaigns. It also targets smugglers and small-time dealers with more operations carried out by newly-formed "narco teams" that especially focus on operations around schools and other places frequented by young people, the most vulnerable targets for drug peddlers.

Share on Facebook Share on Twitter
Previous in Investigations Turkish security forces seized a statuette of the Viking god Odin... Next in Investigations A court in the Turkish capital handed down life sentences yesterday...
DAILY SABAH RECOMMENDS