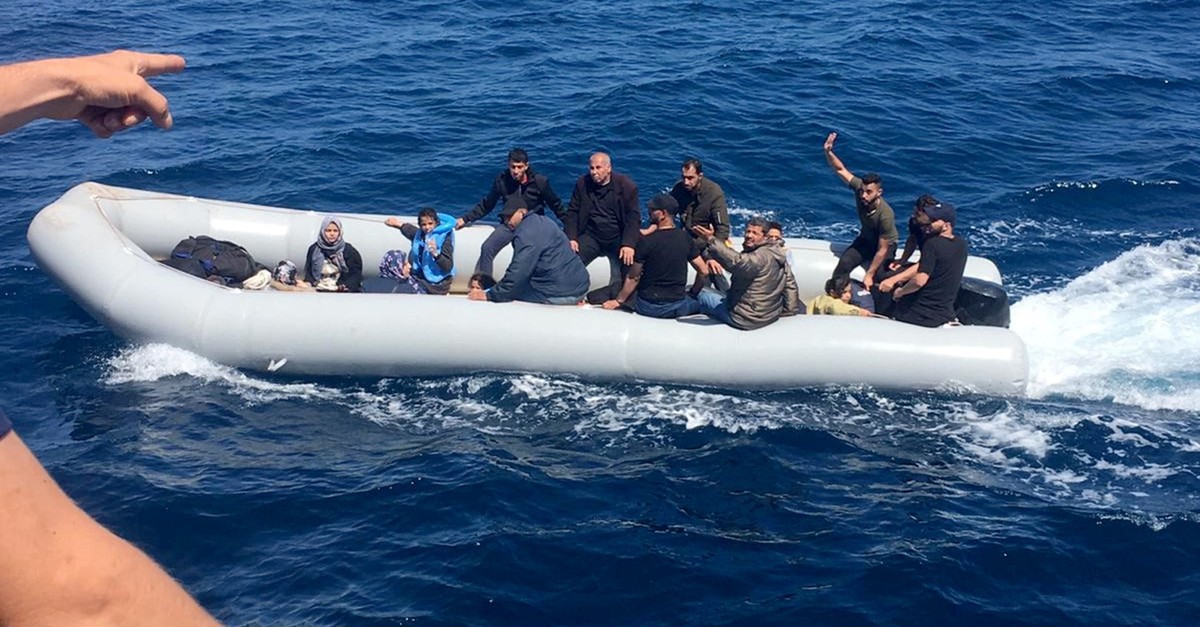 The latest figures indicate that no matter what measures are taken, illegal migrants arriving from around the world still try to reach Europe from Turkey. In May alone, more than 27,000 people were stopped en route to the continent

Illegal or irregular migration as it is officially called remains a thorn in the side of Turkey, which sits at the crossroads of three continents. In May, 27,536 migrants were stopped inside the country. The country boosted patrols at sea and land but still struggles to stop the influx of migrants from the Middle East, Africa and Asia looking to reach Europe, a destination where a growing opposition to migrants fails to deter the desperate ones whose only option is migration.

Either fleeing poverty or prevailing conflicts, thousands arrive in Turkey every year to take their chance at illegally crossing into Europe. In this country bordering Bulgaria and Greece at sea and land, illegal migrants are a usual sight; only their number has been aggravated in recent years.

Numbers by the Interior Ministry show that of 27,536 migrants, 2,605 were intercepted at sea, the most dangerous route. Illegal migrants take Aegean, Mediterranean and Black Sea routes to get to European countries, while the Aegean is the most popular as it is dotted with Greek islands in close proximity to Turkish shores.

Prior to their travel to western Turkey where Aegean shores are located, migrants enter Turkey from borders in the east and south. Afghan migrants amass at the eastern border with Iran, especially in winter months. Though many make it into Turkey by crossing treacherous terrain, others succumb to freezing temperatures as evidenced in nearly a dozen migrant bodies found in the past few months after heavy snow lingering in the area thawed with spring. If they can make it into Turkey alive and dodge authorities, migrants secretly travel to big cities in the west to work and live though many prefer taking the Aegean route into Greece.

To reduce the number of illegal migrants on the dangerous Aegean Sea route, Turkey and the European Union signed an agreement in 2016. The deal stipulates that Greece is to send migrants held on its Aegean islands back to Turkey. In return, Turkey is to send Syrian migrants it hosts to various European Union countries. The deal also saw an escalated crackdown on human smugglers and increased sea patrols to prevent immigrants, and for a while, it helped reduce the number. Yet, some desperate migrants still take the route even in winter when a safe journey through the Aegean is nearly impossible aboard overcrowded, unsafe dinghies.

SMUGGLERS AMONG CULPRITS FOR MIGRATION

Human smugglers play a key role in aggravating the number of gullible migrants. Some 561 human smugglers were captured in May operations by Turkish security forces. It is believed that smugglers were behind a string of rumors that triggered a new flow of migrants in eastern and western Turkey earlier this year and in late 2018. Hundreds of Afghan migrants arrived en masse, for instance, to the eastern border upon rumors that the border would be forever closed soon when a new, well-protected wall would be completed.

Indeed, Turkey is building a massive wall on the border, like it did on its southern border with Syria, but experts say that the migrant flow would not end overnight. Migrants from Asian countries like Afghanistan and Pakistan have been steadily streaming into Turkey from Iran for years, and they made headlines only last year after they started traveling in large numbers. The ongoing Taliban violence in Afghanistan and inherent poverty in the country embattled with years of wars send Afghans abroad, and those arriving in Turkey often seek to reunite with their families, relatives who earlier reached Europe and settled there as migrants.

Human smugglers are also believed to be behind an online campaign to fuel the migrant influx into Edirne in northwestern Turkey in April. Hundreds of illegal migrants were stopped by security forces in the city over online rumors and fake news of "opening of border crossing between Turkey and Greece."

Migrant smuggling has been a profitable business as conflict in Turkey's southern neighbor worsened, and smugglers still continue operating, although in a much limited capability thanks to operations. They charge fees as high as $2,000 to take migrants to Europe from Turkey.

The nationality of migrants hoping to cross into Europe varies, but Syrians invariably have been in the top three on the list of those seeking to infiltrate into Europe. Official figures show Afghan and Pakistani migrants make up the majority of illegal migrants.

Between January and May, more than 41,000 Afghan migrants were intercepted, and another 16,208 Pakistani nationals were stopped in the same period. A total of 9,026 migrants were intercepted in the same period. Statistics show radical decreases in the number of those looking to reach Europe based on years though it remains to be seen if this downward trend will continue. For instance, figures by the state-run General Directorate of Migration show 100,841 Afghan migrants were stopped in 2018, while this number was more than 45,000 in 2017. Other factors still stand in terms of explaining the decline, such as better policing of borders or more checkpoints and operations to capture migrants who travel from eastern and southeastern cities to reach the Aegean shores of Turkey.

In 2017, the number of Syrian illegal migrants who were intercepted by security forces was more than 50,000, and it dropped to 34,053 last year, and only slightly above 9,000 in the first five months of this year. The deal with the European Union might have played a role in this decline in the number of Syrian migrants, but there is a better, if not partial, explanation for the decrease. Giving those people a place to live definitely pays off as evidenced in the number of people returned to war-torn Syria from Turkey. Interior Ministry figures show that the number of Syrian refugees who returned to Syria from Turkey reached 330,991, a number that increased after two Turkey-backed operations by Syrian rebels to retake towns occupied by terrorist groups in northern Syria. Although the civil war still rages on in Syria, northern areas closer to the Turkish border are relatively safer for the return of refugees who took shelter in Turkey. Turkey currently hosts more than 3.6 million Syrian refugees, the largest refugee community in the world.