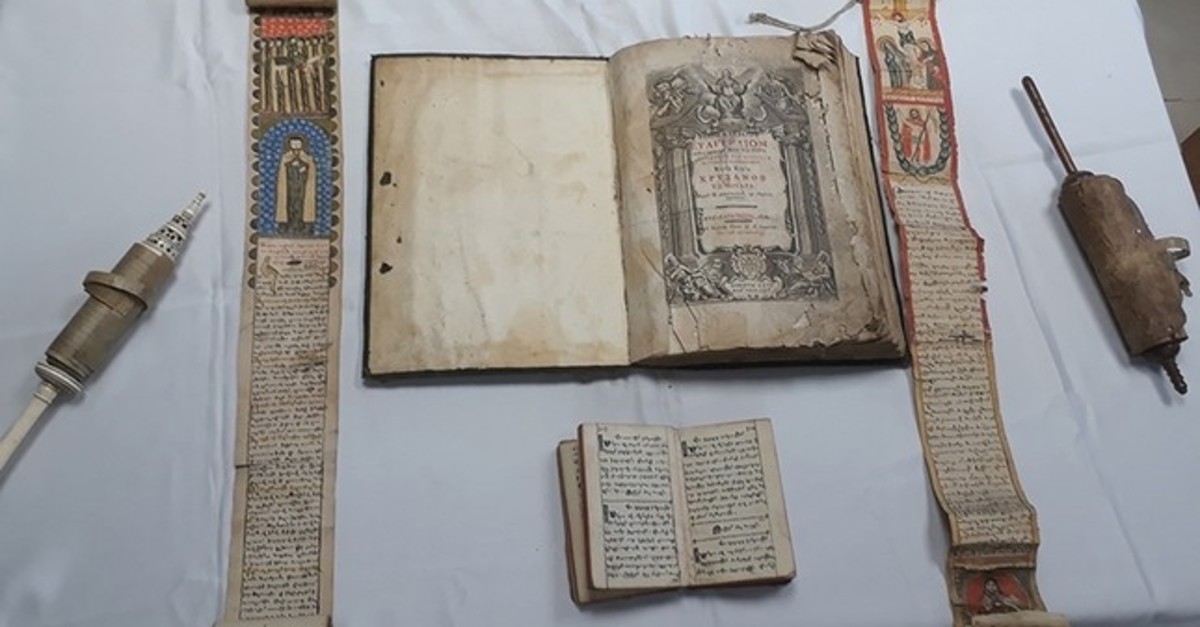 An ancient manuscript seized in an anti-smuggling operation in Istanbul in March displayed to reporters, March 28, 2019.
by Daily Sabah with AA Jun 15, 2019 12:19 am

The cradle of multiple civilizations, Turkey strives to keep its artifacts at home with a relentless crackdown on smugglers and smuggling into the country from war-torn Syria

In anti-smuggling operations this year, Turkish security forces have seized a large number of artifacts originating from Anatolia as well as neighboring Syria. Police and gendarme pursue a heightened crackdown on smuggling in Turkey, home to different civilizations from prehistoric communities to the Ottomans.

Smuggling efforts to Europe and the U.S. were thwarted and police seized a trove of hundreds of thousands of ancient coins, arrowheads, statuettes, pots and jewelry, among other artifacts.

In January, security forces seized a gold-gilded Quran, the Islamic holy book, in eastern Turkey's Muş while a brass globe bearing figures belonging to the Persian Empire, dating back to Ottoman times was captured in February in capital Ankara. Also in February, security forces in central Turkey's Çorum thwarted the sale of a 2,200-year-old Hellenistic-era statue, while police in Kayseri stopped the smuggling of a rare 13th Century painting, depicting the crucifixion of Jesus Christ.

In March, gendarme in Reyhanlı, a town bordering with Syria, discovered an ancient hand-written Torah, and paintings purportedly belonging to Pablo Picasso that was smuggled from Syria.

Turkey has become a primary destination for those smuggling antiquities from Syria. Authorities have stepped up efforts to prevent the smuggling and sale of smuggled artifacts. The government has issued a list of artifacts believed to have been stolen from Syria and warned customs agents, collectors and others against their sale.

Also in March, police in Ankara recovered a trove of artifacts, including a helmet, a dagger, a cross, an arrow and a quiver, that was stolen from a grave of a Byzantine commander, who died in the Battle of Manzikert or Malazgirt between Seljuks and Byzantine Empire, in 1071. In the same month, police in Istanbul raided several places against artifact smuggling and confiscated 836 artifacts, including a statue resembling famed Guennol Stargazer, which was smuggled abroad after it was discovered in western Turkey in the 1990s, a Greek Bible carved in stone and Iron Age axes.

In April, authorities in the western city of Denizli seized two 1,500-year-old books from Egypt in anti-smuggling operations while a 2,000-year-old marble statue with ancient Roman inscriptions was seized in Balıkesir.

Also in April, statues from Urartu era, Lydian coins, a 1,100-year-old religious book in Hebrew, jewelry, handwritten manuscripts, dating back to the era of Suleiman the Magnificent, were seized in nationwide anti-smuggling operations. Last month, security forces thwarted sale and smuggling of a Pablo Picasso painting, Roman and Byzantine coins, a 1,500-year-old Hebrew manuscript and a 1,200-year-old Odin statue.

Some artifacts were recovered from illegal digs foiled by security forces while others were found when undercover police and gendarmerie officers prevented their sale. Some were discovered in online sales. All artifacts were handed over to different museums.

Professor Celal Şimşek, who heads archeology department of Pamukkale University, says Anatolia is unique in terms of the wealth of historic artifacts and anti-smuggling operations shouldn't be the only measure to stop smuggling. "Smuggling and illegal digs is a bleeding wound for Turkey. Despite measures, illegal excavations still continue. This can be prevented by raising awareness of the issue so that people would be more protective of historical artifacts," he told Anadolu Agency. Şimşek also proposes a stricter oversight on online sales of metal detectors that are used by illegal treasure hunters.