50 detained, dozens wanted in new wave of operations against FETÖ 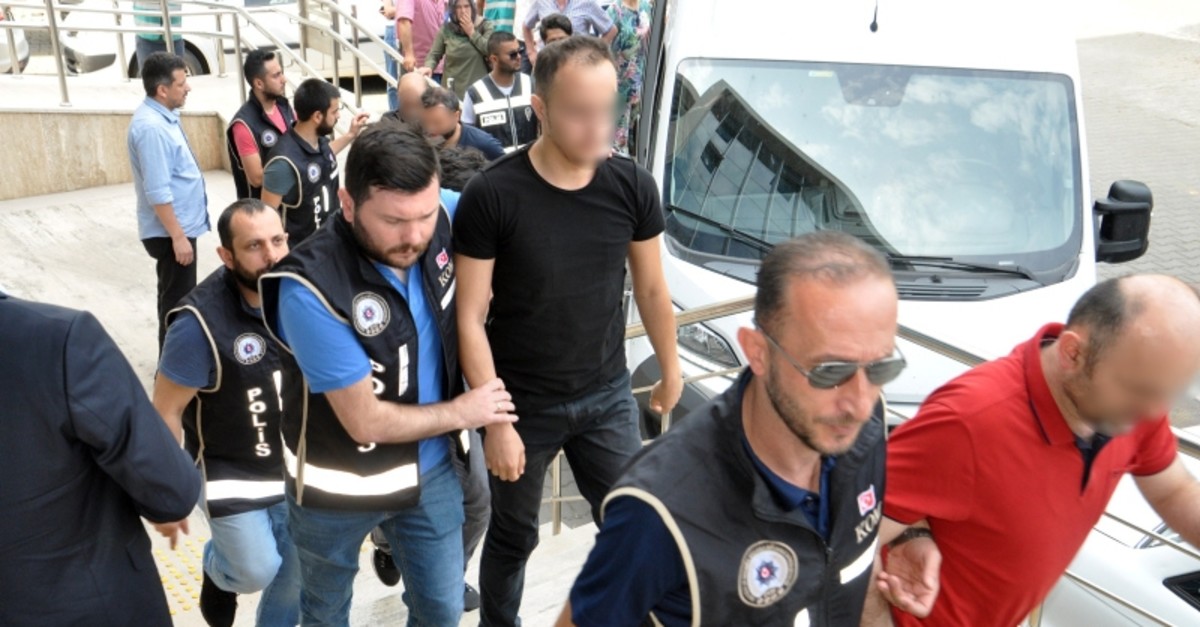 Turkish authorities issued arrest warrants for 194 suspects linked to FETÖ terrorist group, while 50 were detained in nationwide operations against the group behind the 2016 coup attempt

The Turkish authorities are on the trail of dozens of suspects, from active-duty soldiers to former employees at different ministries, in a new wave of operations against the Gülenist Terror Group (FETÖ).

Prosecutors in Ankara, İzmir, Konya, Bursa, Adıyaman and Erzincan have ordered the arrests of 194 suspects and 50 were already detained when Daily Sabah went to print.

The operations come three years after the terrorist group sought to overthrow the government through its military infiltrators. Two-hundred-and-fifty people were killed and hundreds of others injured when military officers affiliated with the group staged a coup bid on July 15, 2016.

A state of emergency after the coup attempt saw tens of thousands of people detained or arrested. Although it was lifted later, operations against FETÖ continue across Turkey almost on a daily basis.

In the capital Ankara, prosecutors ordered the arrest of eight suspects who were earlier suspended from their jobs at the Health Ministry and different public hospitals on suspected FETÖ links. Two former Foreign Ministry employees are also wanted for links to the terrorist group. Eleven suspects were apprehended in operations in eight cities.

The İzmir Chief Prosecutor's Office sought the arrest of 65 suspects in an investigation into FETÖ's military infiltration. Suspects were former and active-duty officers from Land, Air, Naval and Gendarme Forces of the Turkish army. They were identified through their contact with FETÖ's "secret imams," a term used to describe the group's handlers for military infiltrators, via payphones.

Operations were carried out in 30 cities to capture suspects. Investigations following the coup attempt found that FETÖ members in the military secretly and regularly met their civilian handlers, contacting them via payphones to avoid detection. Separately, prosecutors sought the arrest of 22 civilian suspects linked to FETÖ, including 10 ByLock users.

ByLock is an encrypted messaging app that the terrorist group conceived for secret communications between its members. Investigations into ByLock started prior to the 2016 coup attempt. However, they gained significance after the attempt. Authorities had deciphered messages revealing secret messages pointing to an imminent coup in operations after the putsch bid.

The Interior Ministry announced that 4,676 new ByLock users were detected in the investigation that already identified more than 95,000 users. More than 79,337 people faced a legal process in ByLock investigations. A group of police intelligence officers is accused of controlling the private app used to deliver FETÖ leader Fetullah Gülen's messages to his followers, as well as to instruct the group's members on how to carry out plots against anti-Gülenists. Servers of the app deployed in Lithuania were brought to Turkey where teams from the intelligence service work to decode it. Investigations point out that the app was one of the most employed means of communication in the secretive group.

Elsewhere, 17 out of 63 suspects wanted by prosecutors in the central city of Konya were arrested in yesterday's operations. Suspects were identified through testimonies of FETÖ's military infiltrators captured in earlier operations. In the northwestern city of Bursa, prosecutors issued arrest warrants for 26 suspects including 14 active-duty soldiers over their contact with their FETÖ handlers via payphones. In the eastern city of Adıyaman, 15 suspected members of FETÖ, from shopkeepers to civil servants, were captured in operations against the terrorist group.

In operations in the cities of Erzincan, Ankara, İzmir, Ağrı and Sivas, seven FETÖ suspects, including three soldiers were arrested in operations against the group's secret military network.

The terrorist group is known for its widespread infiltration of the army, law enforcement, judiciary and bureaucracy. It first attempted to overthrow the government in 2013 with its infiltrators in the judiciary and the Turkish National Police. It failed, and the group faced increased scrutiny. When the news broke that the military was preparing to launch a mass purge of FETÖ-linked officers in August 2016, the group moved to prevent it with the coup attempt. Strong public resistance ultimately stopped the coup, and the coup's ringleaders, including generals, were arrested.