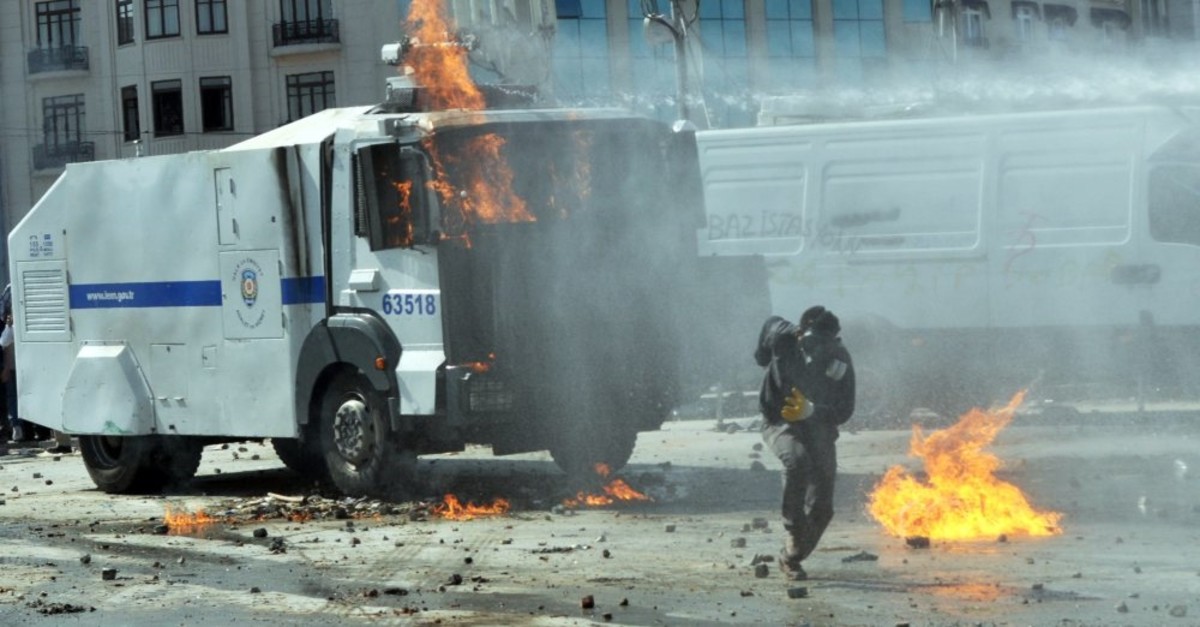 Sixteen defendants, including a tycoon, appeared before a court in Istanbul yesterday as the main trial on the 2013 Gezi Park riots opened. Defendants face life on the charge of attempting to overthrow the government by force

Osman Kavala, a prominent tycoon who also heads a foundation linked to George Soros, and 15 other defendants are on trial for financing and inciting the 2013 Gezi Park riots in Istanbul. Defendants, including six fugitives, face life imprisonment and lesser prison terms for attempting to overthrow the government. The indictment citing 746 plaintiffs, including President Recep Tayyip Erdoğan, accuses the suspects of financing and coordinating the actions and protests that took place during the Gezi Park riots in 2013, while claiming that they had been involved and directed the aspects of an uprising since 2011.

Prosecutors are accusing defendants of holding a series of meetings to plan the riots and contacting foreign activists on how to launch riots.

It said the defendants "at best wanted to force the government to resign or call early elections" and were making efforts "to prepare the grounds for a civil war or coup" if that did not happen.Several suspects also face charges of damage to property, unauthorized possession of hazardous substances, damaging houses of worship and cemeteries, violation of law on firearms and knives, qualified robbery and bodily injury.

Hundreds of thousands of people marched in Istanbul in June 2013 in what began as a peaceful protest against a plan to build a replica of an Ottoman barracks on Gezi Park in the city center. Following a harsh response by the police, which is now blamed on the Gülenist Terror Group (FETÖ), the protests turned into nationwide demonstrations and riots against the government of then-Prime Minister Erdoğan. Portrayed as Arab Spring-style riots in the Western media, protesters garnered support even among moderate critics of the government despite their violence. The fate of Gezi Park, where officials had plans to rebuild an Ottoman-era building that were thwarted when red tape caused delays in redevelopment plans, are still in limbo. However, for rioters, the protests were a show of force for terrorist groups.

At least 10 protesters and one police officer died during clashes or events related to the protests, while thousands of others were injured.

Terrorist groups, including the PKK and the far-left Revolutionary People's Liberation Party-Front (DHKP-C) and various other fringe groups, also jumped on the occasion, attacking security forces or taking part in rioting.

Kavala, who was arrested in 2017, and Yiğit Aksakoğlu, who is linked to Kavala's Anadolu Kültür foundation, are the only jailed defendants in the case. Kavala was photographed among rioters, while actor Mehmet Ali Alabora, a defendant at large, famously tweeted that the protests were not about "a few trees" in the park, calling for mass riots against the government.

Six suspects are at large, including Can Dündar, a journalist who fled to Germany as the appeal process on his espionage sentencing in another case linked to FETÖ is ongoing.

The first hearing saw a large turnout of supporters of defendants, including lawmakers from the opposition Republican People's Party. Consul generals and representatives of consulates of Switzerland, Sweden, Germany, Canada, the Netherlands, the United States, France, the United Kingdom and Italy also watched the trial.

In his opening statements, Kavala denied the charges against him and claimed that the allegations he faced had no factual basis.

Osman Kavala is often branded the "Turkish Soros" for his links to the controversial Hungarian-American tycoon George Soros. He is known for his close ties to the Peoples' Democratic Party (HDP), a party linked to the PKK terrorist group. Earlier, Soros's Open Society Foundation said it had become a target of the investigation and would cease operations in Turkey.

An investigation launched after the July 15, 2016 coup attempt points to FETÖ, the main culprit in the coup attempt, for fueling the tensions that turned peaceful protests over Gezi Park into violent riots, effectively helping justify terrorist groups to exploit the protests to stage riots. The city's police chief during the riots was detained amid concerns that the aggressive use of force by police in the Gezi Park protests may have been the product of a plot by Gülenists to foment chaos. The latest inquiries reveal that FETÖ-linked police officers that held key posts during the Gezi Park riots contributed to the escalation of violence. Ramazan Emekli and Yunus Dolar, two senior police chiefs, are accused of ordering the burning down of tents set up by protesters at Gezi Park, something that provoked rioters toward further violence and targeting police, while Yunus Dolar, another police chief, is accused of ordering the rough treatment of protesters and rioters.