Long journey to Europe begins in Istanbul for illegal migrants 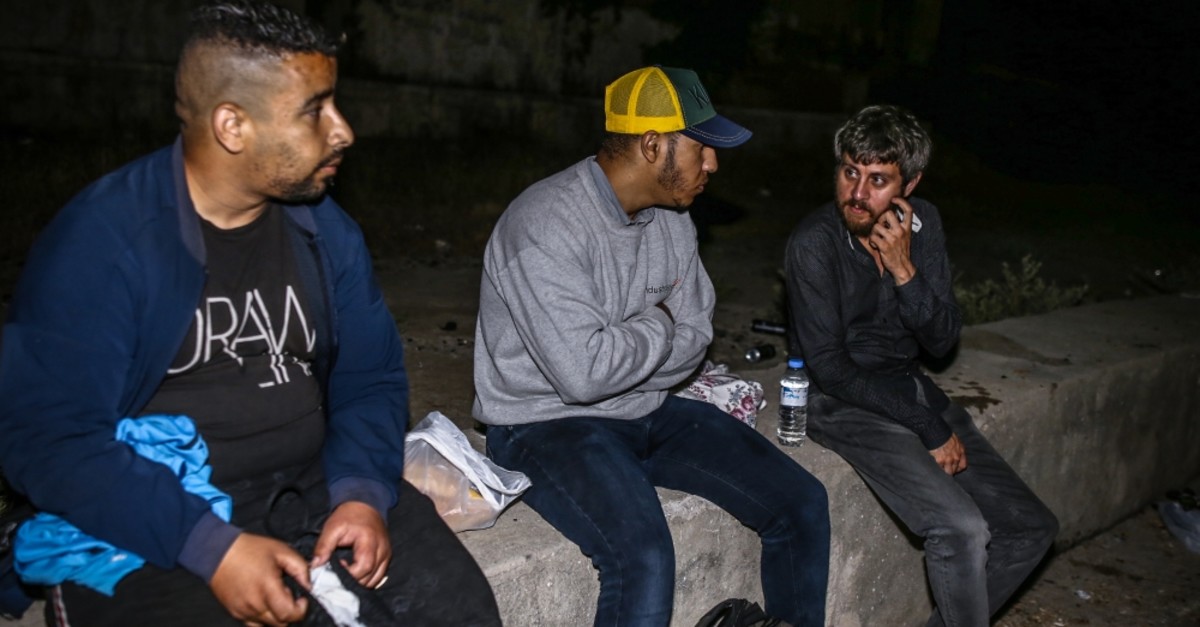 Anour Asbihani (left) and Hamza Besseboua (center) speaks to Sabahu2019s Emir Somer about their journey to Istanbul and plan to go to Europe.
by Emir Somer Jul 09, 2019 12:16 am

Istanbul attracts migrants here to stay as well as those making the city a starting point for illegally crossing into Europe. Daily Sabah's Emir Somer went undercover with a group of migrants secretly trying to take a sea route to Europe with the help of smugglers

Istanbul, Turkey's most populated city and main financial hub, has attracted migrants from all over the world for centuries. Increasing numbers of conflicts and rising poverty in Asia and Africa have made it a favorite destination for migrants seeking a better life. Though some choose to stay, others seek to pursue their dreams elsewhere, making the city a starting point in a dangerous, potentially fatal, journey. It is a matter of hope and death for illegal migrants of all nationalities who brave challenging journeys to reach Turkey, getting closer to their ultimate goal of crossing into Europe where either their relatives or the promise of a better life awaits them.

I became "one" of them, a "migrant" for a firsthand account of how their lengthy journey to Europe begins, or rather, ends, as a police operation thwarted their plans to board boats to the continent and as a matter of fact, saved their lives. A human smuggler is what you need in the first step of an illegal journey. Upon learning that İskender Paşa, a neighborhood in Istanbul's historic Fatih district teeming with migrants from all nations, is "a market" for smugglers, I visited the place. This is where a migrant should contact the intermediaries of smugglers who arrange the journeys.

Posing as a Turkmen and with a language peppered with Turkish, English and Turkmens dialect, I checked coffeehouses where intermediaries reportedly hang out.

My small talk with eight people where I implied that I wanted to migrate fell on deaf ears — or so I think. About half an hour later, a man who introduced himself as "Mustafa" approached me and asked if I needed "help." His next question was if I knew Sorani. I didn't and he didn't speak Turkmen. He was not without help, however, and tells me "Refik" would take care of me. "Refik," presumably his code name, arrived 10 minutes later, but he was blunt too and gives me a piece of paper with one name and location: Samet on Zeytinburnu shore. No phone number. As I found out later, Samet is the guy you visit if you want an illegal crossing into Europe and the main organizer gathering migrants traveling alone. 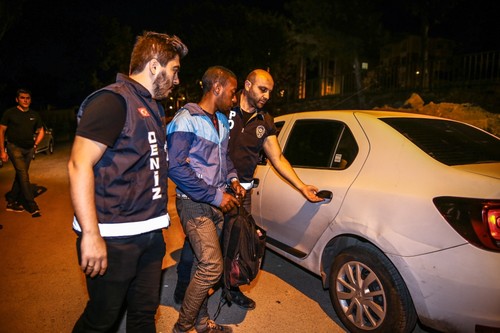 Nabil Sorrua, who arrived from Somalia, was deported after police stopped the young man from taking a boat journey arranged by smugglers.

My next stop was Zeytinburnu shore where it was easy to spot scattered groups of men, sitting together or alone, apparently waiting for something. Some of them were in Turkey illegally and plan to leave the country that way too. Some were not. I also found Samet and he gave me yet another address: Pendik, a district on Istanbul's Asian side. As for the migrants, they were understandably shy and anxious, thinking I am a policeman. My efforts to start a conversation failed at times, but I finally managed to help some open up after I convinced them I was just like them.

Some said they would wait until evening for a visit to Pendik, while others said they would wait for a car to take them to Babakale, a place in Çanakkale where migrants heading to Greek islands go for journeys aboard boats. Finally, I learned that a boat would arrive in a spot on the Pendik shore at 3 a.m. and take the migrants to a ship waiting off the coast. The boat fee is "at least 3,000 euros ($3,364)," Samet says. Those who do not pay before boarding cannot go, he strictly warned. "At least" is key in this sentence as some are charged more based on the "risk" of the places the migrants want to go. I later found out some are required to pay as much as 7,000 euros for a longer journey.

The smugglers operate out of Istanbul's Pendik and Zeytinburnu shores, and outside the city in Gebze, a town just outside eastern Istanbul, is a destination for human smuggling. Picking up migrants from the shore, they take them to larger ships anchored off the coast. From there, the journey to Europe begins. For those preferring the land route, gangs arrange journeys to Edirne, a city west of Istanbul and on the border with Greece. Smugglers also arrange trips to Balıkesir, Çanakkale, Muğla and Tekirdağ, where migrants are transferred to boats.

Finally, the evening came and I went to the "shock house" as the smugglers call it, on the Pendik shore. This is not a literal house as the name implies but rather an abandoned, decrepit building. After a brief wait there, it was 2:36 a.m. and I join my companions, Nabil Sorrua from Somalia, Hamza Besseboua from Algeria, Anouar Asbihani from Morocco, Ayoub Ahnar from Palestine, Amer Dhat from Iraq and Muhammed Soragin from Uzbekistan for a walk to the nearby shore. I was the only one with a bag of food. All had some sort of food package, apparently delivered by the same guy, a member of smuggling gang. All had the same brands of foods, chocolate and snacks to prevent hunger during the strenuous journey, a loaf of bread and a small slice of cheese.

Of the group, I noticed that Asbihani and Besseboua were closer to each other than the others. This is because they both hail from North Africa and have the same profession. Both men, who are in their 20s like the rest of the group, are tailors and bachelors. They left their parents back home and arrived in Istanbul about four months ago. They were in the city without papers, but this does not seem like a problem for both men as their goal is to leave as soon as possible. Nabil showed me his cellphone and passport and said "Ali Baba" brought them to him while gesturing his were stolen.

He did not talk more about this "Ali Baba," but he was apparently another member of the smuggling gang. Among them, Soragin had waited the most. He had been in Istanbul for four years, patiently waiting for an opportunity to sneak into Europe. We talked about the dangers we might face along the way, but they seemed self-assured, mentioning that all but Nabil knew how to swim. Nabil himself packed something like an inflatable armband, something made of Styrofoam which he thinks will protect him from drowning if something goes wrong.

The smugglers were punctual and a boat slowly approached the shore. So did Istanbul's Sea Police. From sea and shore, police officers emerged from the shadows and in a few minutes, rounded up the illegal migrants. So ended a potentially fatal adventure for my new companions. Figures from the Turkish Coast Guard Command show that 28 migrants died en route to Europe by sea between January and yesterday.

Some 268,000 illegal migrants were held in Turkey in 2018, according to the Interior Ministry. Turkey has been a key transit point for illegal migrants aiming to cross into Europe to start new lives, especially those fleeing war and persecution.

As the conflicts, poverty and violence continues in the Middle East, Asian countries and Africa, Turkey has become a popular hub for illegal migrants seeking to cross into Europe. Greek islands in close proximity with Turkey's Aegean shores are favorite destinations of migrants heading to Europe. However, journeys aboard unsafe, overcrowded boats often steered by inexperienced migrants turn out deadly. To reduce the number of illegal migrants on the dangerous Aegean Sea route, Turkey and the European Union signed an agreement in 2016. The deal stipulates that Greece is to send migrants held on its Aegean islands back to Turkey. In return, Turkey is to send Syrian migrants it hosts to various European Union countries. The deal also saw an escalated crackdown on human smugglers and increased sea patrols to prevent immigrants attempting to cross; for a while, it helped reduce the number. Yet, some desperate migrants still take the route even in winter, when a safe journey through the Aegean is nearly impossible aboard overcrowded, unsafe dinghies.

In Istanbul, continuous operations by police seem to curb the activities of migrant smuggling gangs. A crackdown on a notorious gang in May apparently instilled fear in smugglers who now act more cautious.

Akbar Omar Tawfeeq, an Iraqi national accused of running a prominent human smuggling ring, was arrested in the said crackdown. Tawfeeq is dubbed as the leader of Europe's largest human smuggling gang by the Turkish media and is reportedly behind the transfer of a large number of illegal migrants to Europe from Turkey. The suspect and 24 others were apprehended in operations in Istanbul and the Aegean cities of Muğla, Çanakkale and the western city of Balıkesir on May 25. Operations were carried out in collaboration with the Istanbul police, the Istanbul branch of the National Intelligence Directorate (MİT) and Coast Guard units that have been on the front line in efforts against human smuggling and illegal migration. Turkish media outlets reported that Tawfeeq and his gang have been under surveillance for one year, and they were planning to flee abroad when they were captured.

Along with Tawfeeq, five other foreign suspects were nabbed. In one boat belonging to the gang and stopped before its occupants attempted to flee abroad, police found a large amount of U.S. dollars and euros. Seven boats owned by the gang and reportedly used for smuggling were also seized. Tawfeeq lived in a luxurious manor in Istanbul's Ataköy district and posed as a wealthy tycoon, according to security sources. The gang was also accused of cooperating with the terrorist group PKK and the People's Protection Units (YPG), the PKK's affiliate in Syria, for human smuggling from Syria and Iraq. Smuggled migrants would then be taken to Greece, the gateway to Europe from Turkey and from there, travel to Italy and other European countries.

The gang would charge migrants at least 5,000 euros and earned about 2 million euros yearly according to media reports. The gang targeted Afghan and Iraqi nationals in particular, security sources say. They helped them both to infiltrate Turkey and secretly travel to Greece and from there, to other countries, in exchange for high fees. They had several connections in Greece for the transfer of illegal migrants to other countries.Official figures show 223 smugglers were apprehended so far this year in operations against smugglers helping illegal migrants in their journeys by sea and land. Just yesterday, 55 people accused of smuggling migrants were apprehended in operations in eight cities after prosecutors in İzmir, a western city that is among the favorite gateways for illegal migrants, issued arrest warrants.