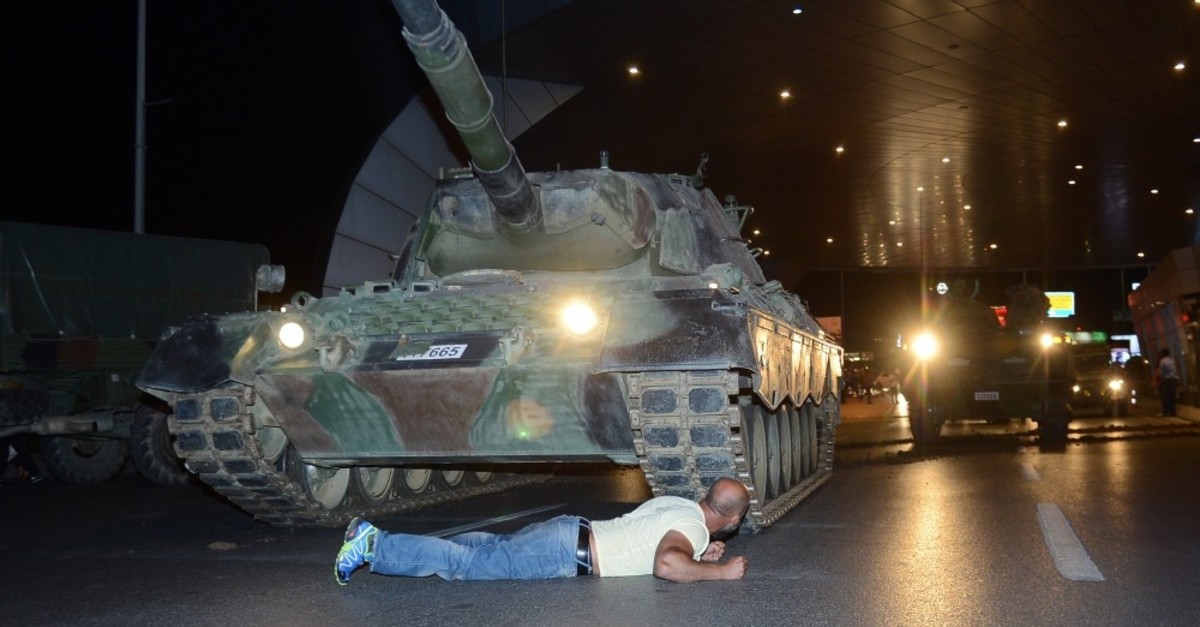 A court in Istanbul handed down life sentences and lighter prison terms to 159 defendants involved in the coup attempt by military infiltrators of the Gülenist Terror Group (FETÖ) on July 15, 2016. Defendants were accused of taking over Atatürk Airport, the city's main aviation hub, during the coup that was foiled thanks to strong public resistance. They were also involved in the killing of two people who resisted the attempt.

In the final hearing of the trial that started in April 2018, the court in Silivri, a massive prison-courthouse complex housing the hundreds of coup suspects, handed down aggravated life sentences to 10 defendants on charges of violating the constitutional order. Some 43 others were given life sentences on the same charges.

Defendants, all military officers, were convicted of illegally occupying the airport, a strategic location, on behalf of the so-called Peace At Home Council, which compromised of putschists. Putschists linked to FETÖ killed 251 people and injured nearly 2,200 others before the attempt was quelled by strong public resistance. The airport was where President Recep Tayyip Erdoğan, who escaped an assassination attempt in southwestern Turkey, arrived and joined a large anti-coup crowd on July 16, 2016. It was Erdoğan's first public appearance after he secretly flew to Istanbul and his meeting with the crowd boosted the morale of anti-coup crowds all across Turkey, who ultimately defeated the coup plotters. Erdoğan was at the airport again on July 15 to mark the third anniversary of the victory against putschists with a large crowd.

The coup attempt is blamed on the military infiltrators of FETÖ that tried to overthrow the government ahead of a planned purge of its infiltrators in the army in 2016.

The airport was one of the first places putschists sought to capture and a large crowd of unarmed civilians flocked to the airport upon hearing a coup was underway. Footage from security cameras at the airport was made public in an earlier hearing and shows putschists firing upon police officers trying to stop them and soldiers surrendering to the police who confronted them in the late hours of July 15, 2016.

Among those sentenced to aggravated life imprisonment in yesterday's hearing was Col. Yusuf Özdemir. Özdemir, a commander at the Air Forces Combat School, was accused of dispatching cadets to the airport.

"There are terrorists at the airport. You should capture whoever is there, be they president or prime minister," Özdemir reportedly told the cadets.

Col. Mustafa Kol, who was also sentenced to aggravated life imprisonment, led a military unit occupying the air traffic control tower and issued putschists' ultimatum to airport employees. Barbaros Akça, who was among 10 sentenced to aggravated life imprisonment, is accused of attending a meeting to plan the coup attempt and commanding troops blocking the entrances to the airport. He was also part of a military unit which tried to seize the Istanbul governorate.

Lt. Col. Serbülent Eken, who oversaw the takeover of the airport along with Col. Ömer Korkut were sentenced to aggravated life imprisonment.

Maj. Yusuf Yenihayat, who fired upon police officers trying to regain control of the air traffic control tower from putschists, was handed down a sentence of aggravated life imprisonment. Others sentenced to aggravated life sentences were Sgt. Aslan Özkan and Pvt. Muhammed Ömer Saldanlı. Özkan ordered troops to "shoot on civilians until you have no bullets left," eyewitnesses told the court.

Gunfire by putschists killed Mahir Ayabak and Zekeriya Bitmez, two civilians who were at the airport to confront the putschists. Saldanlı was accused of killing Ayabak and injuring dozens of people. Bitmez, a 57-year-old father of four, rushed to the airport upon hearing its takeover and the president's call for people to take to the streets. When he could not find a car to reach the airport, Bitmez rode a bicycle to the site and joined the crowd climbing upon tanks to stop the putschists. Mahir Ayabak was a 17-year-old waiter who had nothing but a resolve to confront the putschists at the airport. He was among civilians who sneaked into one of the runways to stop the putschists and managed to escape uninjured from two waves of gunfire. He was shot dead when putschists fired upon civilians for a third time. A total of 56 civilians were injured in the shooting.

The court handed down a sentence of 12 years and six months to 85 defendants for aiding in the violation of constitutional order.

Speaking after the verdict was announced, Tarık Şebik, head of the July 15 Martyrs Association, said, "The FETÖ traitors got what they deserved."

Şebik, who was among the people watching the trial, said defendants "blatantly lied" during the hearings and rejected accusations and tried to prolong hearings.

"The verdict will not bring back Zekeriya and Mahir but the Turkish nation will remain steadfast in defending the country. We will keep the July 15 spirit alive," he said.

In another case in Istanbul yesterday, a local appeals court upheld prison sentences for 40 defendants in a trial on the putschists' takeover of Istanbul municipality's headquarters. The court ordered a retrial for Gökay Atilla Bostan who was sentenced to aggravated life imprisonment. Bostan was the Istanbul director of Disaster and Emergency Management Authority (AFAD) at the time of the coup and was accused of assisting the putschists in the takeover.