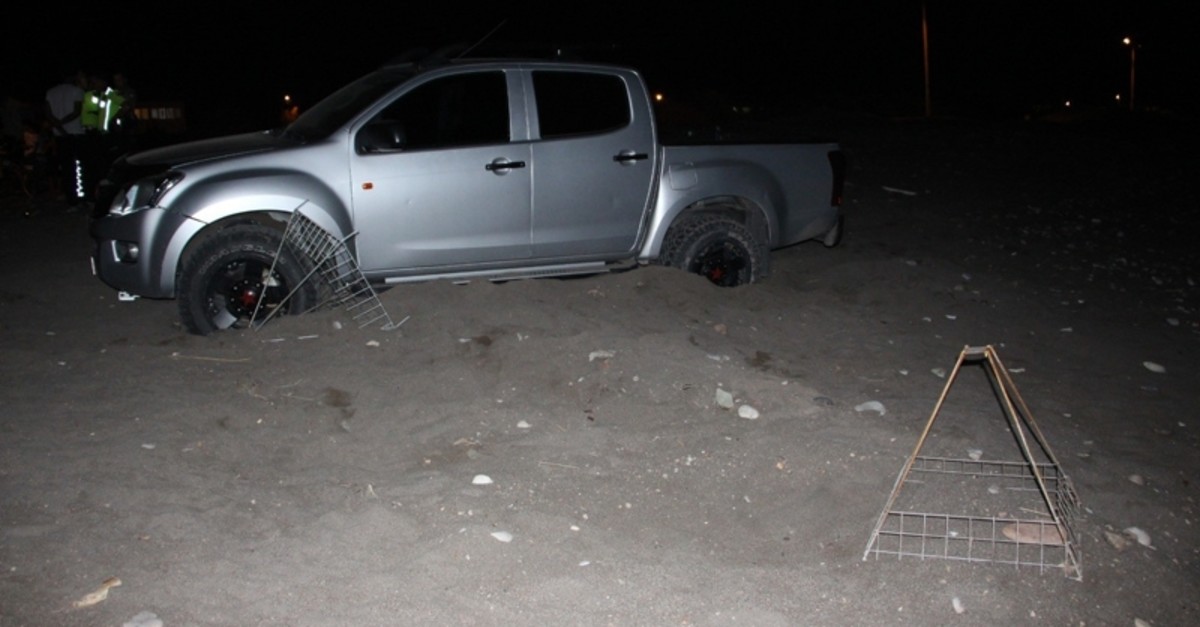 A drunk reckless driver drifting at a protected beach in southwestern Turkey where endangered loggerhead sea turtles known as caretta carettas lay their eggs has been slapped with a record fine.

The incident which sparked a public outcry took place on July 20 when three youngsters identified by their initials as E.Y., İ.T. and R.N. were spotted drifting at the beach located in the Kumluca district of Antalya province with an off-road vehicle.

Despite warnings by 75-year-old local Şehabettin Yaşar that the area was a caretta caretta breeding ground and they should not be driving there, the youngsters, who were reportedly drunk, responded by first insulting and swearing at the man, and then battering him.

The youngsters fled the scene on foot as their vehicle got stuck in the sand, while the police arrived minutes later, followed by local environmental activists. They found that some cages installed at the beach to protect the eggs were broken while some nests and eggs were damaged as the vehicle had run over them.

The suspects were apprehended by local police units some three kilometers away from the crime scene but were released the next day after giving their testimonies. The Antalya Security Directorate said in a written statement that the suspects were all under the influence of alcohol and legally drunk, as determined by the doctor who examined the trio's blood samples and breath.

A criminal investigation was launched against all suspects on charges of deliberate injury, violation of the law of protection of animals and endangering traffic safety. If found guilty, the suspects could face heavy penalties including jail time.

Driver E.Y. also lost his drivers' license for six months and was fined 1,110 Turkish liras ($198) for ignoring traffic signs and rules and driving under the influence. E.Y. was found to be exceeding the 0.5 Promille (Blood Alcohol Concentration - BAC) legal limit by more than three times.

But this was not the end of bad news for E.Y. On Thursday, officials from the local directorate of Nature Protection and National Parks completed their report on the incident, and issued a record TL 60,163 ($10,780) fine for violating their regulation on protecting biodiversity and the ecosystem. E.Y. was also fined an additional TL 400 for damaging four nests.

Turkey's beaches, most famously the Iztuzu Beach in southwestern Muğla province, are popular breeding grounds for loggerheads, but these natural areas are also threatened by tourism.

Thanks to conservation efforts, which can be named among the most successful environmental campaigns in Turkey, every year more loggerheads come to Turkish shores to lay their eggs and baby loggerheads find their way to the sea. The Muğla-based Sea Turtles Research, Rescue and Rehabilitation Center (DEKAMER) leads efforts to protect the endangered turtles and ensure their successful breeding on Turkish coasts. Every year, DEKAMER puts a team of volunteers together to help caretta carettas build their nests and make sure that they are not disturbed by the locals or tourists.

The turtles have more than a dozen nesting spots in the Aegean province of Muğla and the Mediterranean provinces of Antalya, Mersin, Adana, and Hatay.