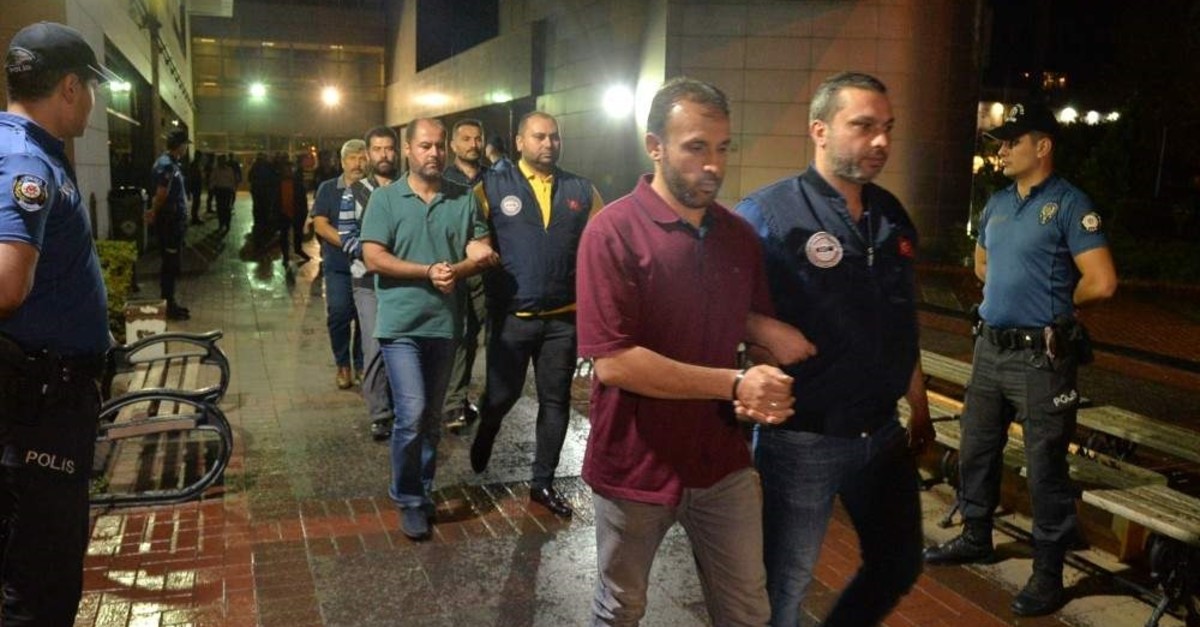 Authorities arrested 38 suspects in operations against the Gülenist Terror Group (FETÖ) on Wednesday, including members of the group's secret network in the army and three others trying to flee Turkey

The Gülenist Terror Group (FETÖ), which is implicated in the July 15, 2016 coup attempt, faced a new wave of operations on Wednesday. Authorities issued arrest warrants for 55 suspects and apprehended three others trying to flee to Greece from Turkey.

In the capital Ankara, prosecutors issued arrest warrants for 55 people in an investigation into the group’s network of infiltrators in the Turkish Air Forces. Thirty-five suspects were arrested and operations were underway to capture the others in operations in Ankara and 23 other cities.

FETÖ is accused of planting its members everywhere, from the police to the judiciary, the army and bureaucracy for years. Disguising their ties to the group, followers managed to rise to the top ranks. They became generals in the army and senior police chiefs. Through its "imams," FETÖ monitored the infiltrators and gave them orders.

The terrorist group’s members were detained following the 2016 coup attempt that killed 251 people and injured nearly 2,200 others. The attempt was the work of FETÖ infiltrators from the air, land, naval and gendarmerie forces of the Turkish Armed Forces (TSK) to overthrow the government. The attempt failed due to strong public resistance against putschists and tens of thousands of people were detained or arrested in its aftermath.

The air force was key in the coup attempt and airstrikes by putschists initially gave the impression that the coup would succeed. A large number of people were killed in airstrikes near the presidential complex in Ankara and the bombing of Parliament further increased panic in the country. Still, a call by the country's leader to "take to the streets to reclaim democracy" was met with a massive response, ultimately forcing the putschists to surrender in the face of public outrage.

Kemal Batmaz, the chief "imam" for FETÖ's air force infiltrators, remains in prison. Batmaz was one of several nonmilitary figures caught in Akıncı, an airbase that FETÖ used as a launchpad for airstrikes in Ankara during the coup attempt. He was also a coconspirator of the putsch bid along with Adil Öksüz, a fugitive FETÖ member, on behalf of Fetullah Gülen, the U.S.-based leader of the terrorist group.

Elsewhere, border troops in Edirne, the northwestern Turkish province bordering Greece, captured three FETÖ suspects as they were secretly trying to flee into the country. Troops intercepted three suspects including a teacher and retired civil servants as they were trying to sneak into Greece from a rural part of Edirne. The suspects were remanded in custody.

Using an illegal migrants' route, FETÖ suspects fleeing a crackdown in the wake of the 2016 coup attempt, try to secretly enter Europe. Some mingle with illegal migrants from other countries while others join forces with members of other terrorist groups, like the PKK, to cross into Greece. Tight border patrols along the border in Edirne often thwart such attempts. Greece is the first gateway for Gülenists, who usually spend a short time there before moving on to other European countries, Germany in particular.

Greece has become a top destination for FETÖ members after the 2016 coup attempt. Ekrem Dumanlı, the editor-in-chief of FETÖ mouthpiece Zaman, as well as Cevheri Güven, a journalist involved in a plot by FETÖ to implicate a politician in a sex tape scandal, were among those who fled to Greece after investigations were launched against them in Turkey. Dumanlı is believed to be in the U.S. while Güven still resides in Thessaloniki. Some FETÖ members manage to reach the country while others are stopped at the border. Once in Greece, FETÖ members find assistance from Yalçın Esmek, a high-profile member of the group, according to a report in the Turkish newspaper Sabah.