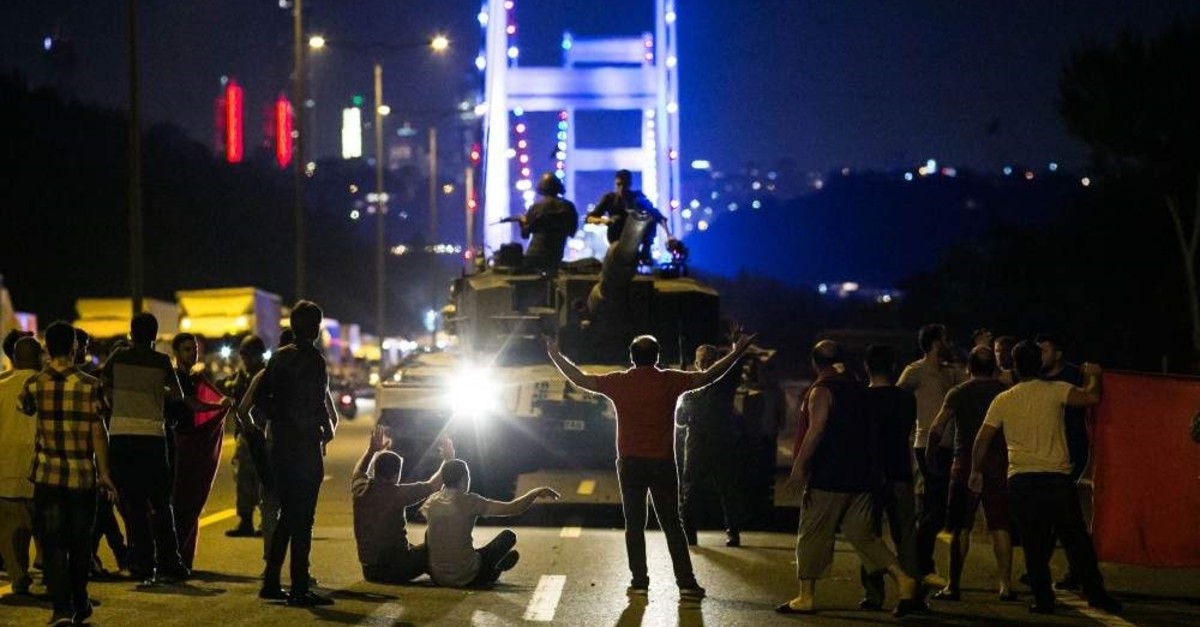 Another trial in Istanbul over the Gülenist Terror Group’s (FETÖ) coup attempt on July 15, 2016 wrapped up on Monday. Eight out the 43 defendants, mostly members of the Air Force Warfare School, were handed down aggravated life sentences.

Some 24 defendants are being tried with no bail, while the others were released earlier pending trial.

In the last hearing in the trial which started in April 2018 by the city’s 37th High Criminal Court, located at a massive prison-courthouse complex in Silivri district, eight defendants were sentenced over “violation of the constitution,” which carries the heaviest sentence under Turkish law and reserved for terror and coup charges.

Among those sentenced to aggravated life in prison was Col. Hüseyin Ergezen, a prominent putschist who was to be “appointed” as director of the Istanbul branch of public broadcaster TRT if the coup attempt succeeded. Ergezen also received additional sentences of 25 years in prison for “hijacking aerial vehicles” and “breaking and entering” for invasion of the TRT Istanbul building where he arrived in a military helicopter.

Other defendants who were handed down the heaviest sentences include Col. Süleyman Demirci, who was found guilty of orchestrating a plot to kidnap the Istanbul governor during the coup attempt and Maj. Ecir Şık, who coordinated actions and “appointments” of other defendants at the Air Force Warfare School.

Six other defendants in the case were sentenced to life imprisonment with the possibility of parole.

There is now only one trial left out of 41 on the Istanbul leg of the coup attempt. The trial of an elite underwater commando unit accused of involvement in the coup attempt is expected to conclude later this month as courts are hearing the last pleas by defendants.

Istanbul was one of the first places where citizens noticed a sinister coup attempt was unfolding. Indeed, most people in the country found out about the coup attempt when videos of soldiers occupying a major bridge connecting the city's European and Asian sides circulated online.

On July 15, 2016, soldiers secretly working for the terrorist group tried to occupy several locations in the city, including police headquarters, the governorate, city hall, a busy toll road, the offices of public broadcaster TRT and the headquarters of the main telecoms operator.

Some senior officers managed to flee just minutes before the coup attempt was thwarted or in its immediate aftermath, but the rest were caught red-handed.

Amid a state of emergency, prosecutors swiftly launched legal processes against the coup perpetrators and ordered the arrests of hundreds. However, trials took longer and so far, 40 trials have concluded with defendants sentenced to prison terms ranging from 10 years to aggravated life imprisonment for a variety of charges, from the coup attempt to manslaughter and abduction. Most among those convicted were high-ranking officers, while the majority of conscripts who were forced to join the putsch bid by their superiors were acquitted.

The Air Force Warfare School was among key locations where the coup attempt was planned, along with two other military bases in the city where coup plotters drafted plans to seize power. Putschists, including officers deployed in Istanbul and Gökhan Şahin Sönmezateş, a general who took part in an assassination attempt against President Recep Tayyip Erdoğan, held a final meeting at the school on July 14, 2016 and revised plans to take over critical places in the city where 86 people were killed by putschists.

A 687-page indictment against the defendants says putschists held an hours-long meeting at the school, in the office of the school’s commander Gen. Fethi Alpay. High-ranking military officers who attended the meeting were sentenced in separate trials. Prosecutors say a top-secret meeting was unknown to authorities before security cameras at the school, removed by putschists when the coup attempt failed, was retrieved and everyone eho attended the meeting were identified.

Officers who left the school on July 15, 2016 to join other putschists were stopped and detained by anti-coup police officers. Police found a list of “appointments” in the possession of Maj. Ecir Şık, along with a plan to abduct then Istanbul Gov. Vasip Şahin. Defendants also had plans in their possession on how to coordinate military helicopters to help other coup plotters and to invade the TRT building in the city’s Ulus district.

FETÖ, in nearly 300 trials on the coup attempt, is accused of carrying out the putsch bid through its infiltrators in the Turkish Armed Forces (TSK), from sergeants to generals.

Tens of thousands of people were detained or arrested following the coup attempt, and a barrage of trials were launched against FETÖ, both for its role in the attempt and other crimes.