Slain Russian envoy remembered as trial for his murder lingers 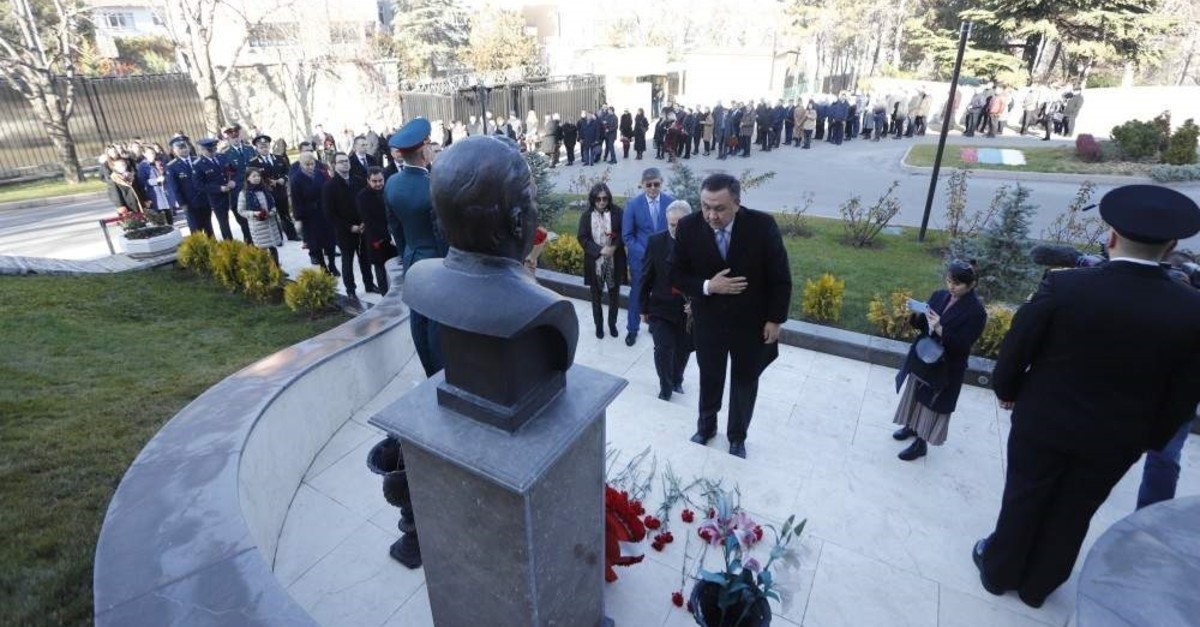 Russian Ambassador to Turkey Andrei Karlov was remembered Thursday on the third anniversary of his assassination. Karlov was the victim of a suspected plot by the Gülenist Terror Group (FETÖ) to derail Turkish-Russian relations when he was gunned down at an art gallery in the capital Ankara in 2016. The suspect, an off-duty police officer with links to the terrorist group, was killed in a shootout and the trial of 28 defendants, including fugitive FETÖ leader Fetullah Gülen, still continues, with the next hearing scheduled for January.
A remembrance ceremony for Karlov was held in the Russian Embassy in the Turkish capital. Turkish and Russian officials, ambassadors of Kyrgyzstan, Kazakhstan, Moldova and Belarus, and Russian citizens living in Ankara attended the ceremony, leaving flowers on a monument for Karlov at the embassy.
Alexei Yerkhov, who succeeded Karlov as the Russian ambassador, said they were working to keep Karlov’s memory alive, seeking to bring Russian-Turkish relations to a higher level with joint activities, like the construction of the Akkuyu nuclear power plant in the southern city of Mersin, the TurkStream project and joint efforts to boost tourism.
Speaking at the ceremony, Yönet Can Tezel, acting director-general for bilateral political affairs at Turkey's Foreign Ministry, said Karlov was a diplomat known for his patriotism, experience and wisdom. “The loss of such people is not only a loss for the countries they represented but also for the diplomacy the world needs much more nowadays,” he said. “The only solace for us is knowing the damage the perpetrators of this treacherous attack hoped to inflict on Turkish-Russian relations did not happen. Indeed, it created a reverse effect (bringing two countries closer). This is because Turkish and Russian state traditions and peoples know how to form a friendship from their shared history, not hostilities,” he said. The event continued with a concert in memory of Karlov by pianist Rustam Rahmedov and tenor Zafer Mutlu.
The assassination of Karlov sought to sabotage the normalization of ties between the two countries as well as a cooperation deal struck in 2001, an expert told Anadolu Agency (AA). Mehmet Seyfettin Erol, head of the Ankara Center for Crisis and Policy Research (ANKASAM), said the assassination of the Russian envoy first aimed to harm the healing of relations between Turkey and Russia, who were going through a rough patch after the former downed the latter's fighter jet on Nov. 24, 2015. "The developments observed following the assassination of Karlov show that it targeted the 'normalization process' dating to June 27, 2016 and the strategic cooperation implemented under the Eurasia Cooperation Action Plan of 2001," Erol said. Erol said it was now clear that the FETÖ and its puppeteers planned this "terrorist act" at a time when bilateral ties between Ankara and Moscow were moving in a positive direction, and both countries had put normalization on their national agendas with the aim of overcoming the dispute over the downed fighter jet. He went on to say that the ongoing trial for Karlov's assassination and testimonies pointed to FETÖ and how it planned the killing six months prior to the incident in a bid to create hostility between Turkey and Russia.
However, the terrorist group and its puppeteers failed miserably according to Erol, as both countries now closely cooperate in political efforts aimed at bringing an end to the civil war in Syria. "The response by Turkey and Russia manifested itself with further and deeper strategic cooperation," he said, adding the Astana process and Sochi summits pioneered by both countries strengthened bilateral ties, foiling the terror group's efforts to undermine the relations. Notably, both countries also operate together in northern Syria, where YPG/PKK terrorists are supposed to withdraw as part of an agreement with Turkey and Russia regarding the former's establishment of a safe zone in the region. He went on to argue that the positive atmosphere of Turkish and Russian relations "undoubtedly" led to the emergence of new balances to spoil plans in the Middle East and the Eastern Mediterranean and noted that agreements on the purchase of Russian S-400 advanced missile system also brought a whole new dimension to the countries' ties. "With this (Karlov) assassination, both counties have once again seen that historical cooperation is inevitable in light of the developments threatening their interests and survival," he said. "Therefore," he added, "Turkey and Russia did not fall into the trap set with the 'Karlov assassination,' which can be referred to as the 'second Nov. 24 provocation,'" he said, referring to the downing of the Russian warplane.
According to the Ankara Public Prosecutor's indictment, the assassin Mevlüt Mert Altıntaş received the order to assassinate the Russian ambassador from Şahin Söğüt, a FETÖ handler, 10 days before the incident. The indictment stated that Altıntaş communicated with Söğüt, a former employee of Turkey's Information and Communication Technologies Authority (BTK), via social media and email accounts.
The defendants in the assassination case were accused of violating the constitutional order, being members of an armed terror group, killing by design and attempting to kill with a terror motivation and the prosecutors sought various punishments for them, including life sentences. The indictment also pointed out that the killing of the Russian envoy was a provocative action against Turkish and Russian ties.
Last Update: Dec 20, 2019 2:31 am
RELATED TOPICS