Life terms sought for each victim of Daesh gunman in Istanbul 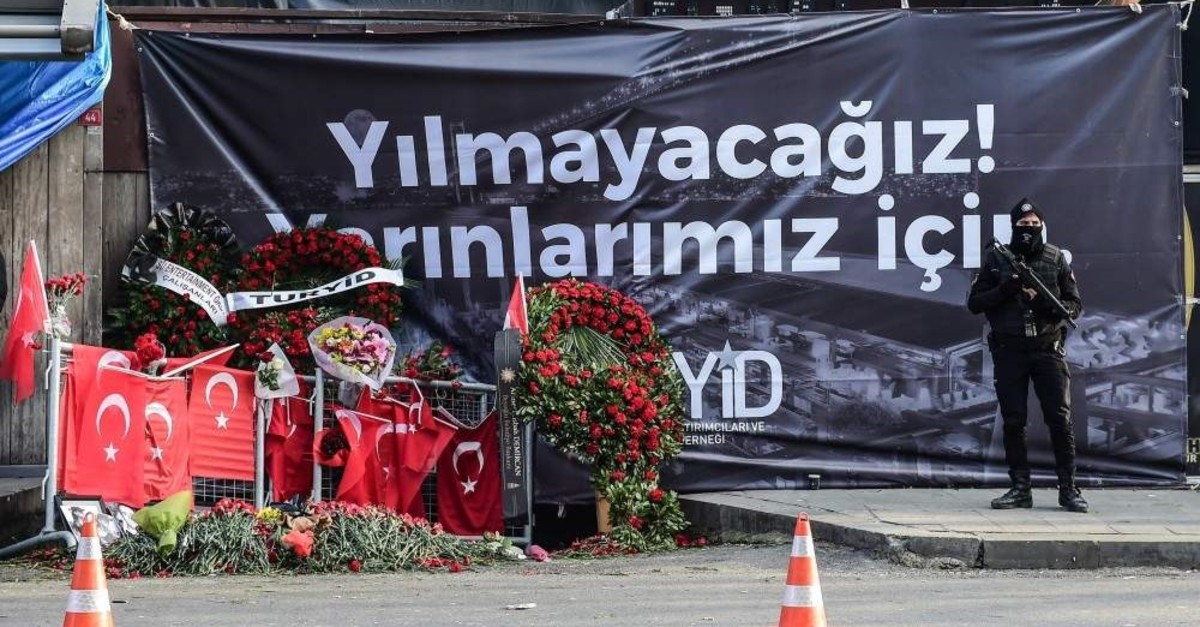 A police officer stands guard in front of a banner that reads in Turkish ,For our tomorrow, we will not fall down,, in front of Reina nightclub, Istanbul, Jan. 3, 2017. (AFP Photo)
by Daily Sabah Jan 27, 2020 4:23 pm
Prosecutors in Istanbul asked a court in the city on Monday to hand down 39 back-to-back life sentences along with an additional life sentence to a Daesh assailant in a request proposed to honor the lives of each victim of the attack.

In the closing arguments of the trial of Abdulgadir Masharipov, who gunned down revelers at the popular Istanbul nightclub Reina during New Year's celebrations in 2017, prosecutors asked for lesser prison terms for 49 other defendants. They also requested the court acquit eight defendants in the case.

Uzbekistan-born Masharipov was accused of storming the crowded venue and gunning down revelers with an AK-47 assault rifle. The militant was captured in a Daesh hideout in Istanbul a number of weeks after the attack and was among 18 defendants detained as part of the case. The others either having evaded justice as fugitives or having been released pending trial.

Masharipov has been mostly silent during the hearings and in his first oral defense, he denied the charges against him, claiming he was not the attacker despite mounting evidence against him. Other defendants in the case include Daesh suspects charged with having instructed him to carry out the attack, helped him hide from authorities while on the run or were fellow members of the terrorist group.

An indictment concerning the attack includes requests from the families of the 39 victims as well as 122 others injured or mentally affected by the attack. Prosecutors asked for 40 back-to-back life sentences for Masharipov for the killing of 39 people, as well as on the charge of "attempt to overthrow the constitutional order" – the crime with the highest sentence under the Turkish penal code. Additional charges against the suspect include membership to a terrorist group, attempted murder and violation of the Firearms Law, which carry prison terms ranging from seven to a combined 2,370 years.

Turkey's efforts against Daesh made it a primary target for the terrorist group, which carried out numerous gun and bomb attacks targeting security forces and civilians, including the country's deadliest terror attack, which killed 102 people and wounded 400 others in a twin suicide bombing at a rally in the capital Ankara on Oct. 10, 2015.
RELATED TOPICS