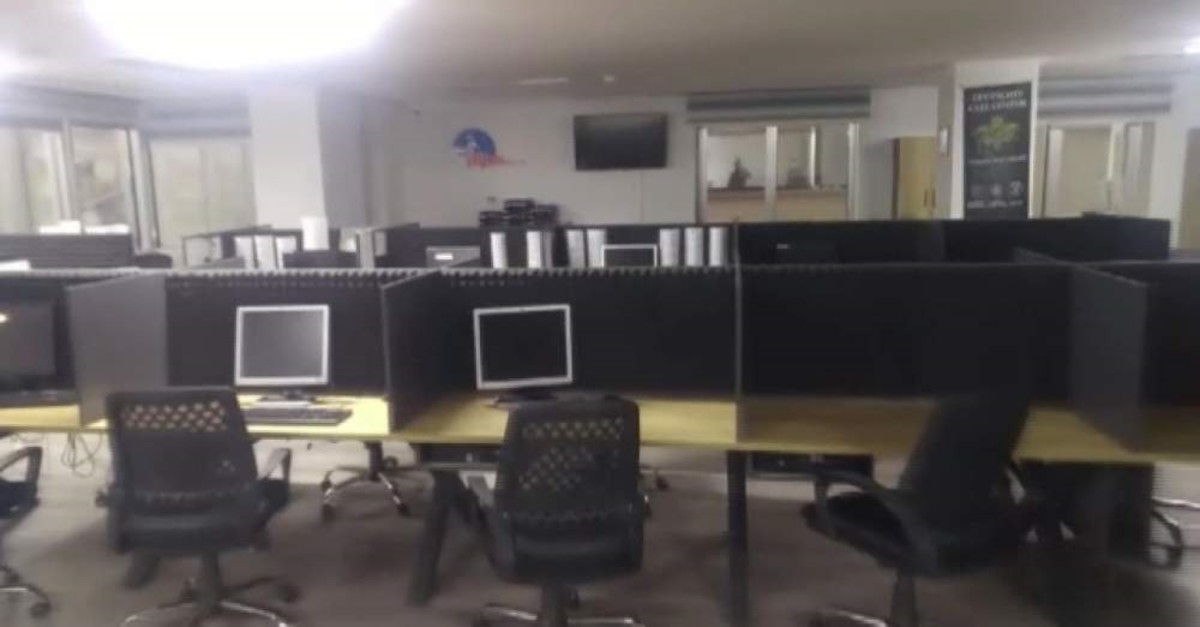 The fake call center set up by the gang in Istanbul. The gang used the place to defraud unsuspecting victims. (DHA Photo)
by Daily Sabah with Agencies Feb 12, 2020 1:49 pm

Turkish and German police are pursuing 76 suspects in connection with a gang that set up a fake call center to defraud German citizens. Suspects are accused of posing as police and prosecutors by telephone and instructing their victims, mostly elderly Germans, to send money to the gang.

German police had contacted Turkish prosecutors for assistance in investigating the gang's leader — identified only by the initials F.Ö. The Turkish suspect, who owned a company in Germany, was accused of setting up a call center in Istanbul for the purpose of fraud. Turkish prosecutors issued arrest warrants for 36 defendants, including five German nationals, who are suspected of defrauding 20 people for a total of 3 million euros and bringing the money secretly to Turkey.

Police launched operations on Wednesday in Istanbul and the Mediterranean cities of Antalya and Muğla to capture the suspects. German police also launched a simultaneous operation in Germany to capture 40 suspects, including 21 Germans, 15 Turks, an Albanian, two Brazilians and a Polish national. An undisclosed number of suspects were arrested on Wednesday.

Turkish police seized a large number of computers and a stash of euros found in the fake call centers in Antalya and Istanbul.

German news agency dpa reported that three people have been detained in the western German state of North Rhine Westphalia. The raids took place at properties in a number of cities in North Rhine Westphalia, including Cologne and Dortmund, an Osnabrueck police spokesman said. The gang allegedly cheated victims in around 100 separate scams across Germany, mainly in the west.

Phone scammers in Turkey pretend to be police or military officers and manipulate people's fear of terrorism. Scammers pick up on unsuspecting victims after obtaining their basic information such as name and address. Posing as police officers, chiefs or prosecutors on the phone, they tell victims that their bank account has been "hijacked" by terrorist groups and that the groups were using it to finance terrorist activities.

If a victim falls for it, scammers tell them to withdraw all the money from the account and transfer it to one of their accounts, assuring that the money "would be under the state's guarantee until the police capture the terrorists who hijacked the account."

German nationals have been the target of gangs with ties to Turkey before. In 2018, police in the western city of İzmir arrested members of a gang involved in a phone scam that targeted 46 German nationals. The crackdown came after a German citizen of Turkish origin filed a complaint with İzmir police saying that they were defrauded by the gang members, who posed as police officers, military officers and prosecutors. The victim said they unwittingly transferred money to a woman residing in İzmir in the scam. The police arrested 20 suspects accused of collecting more than 278,000 euros from Germans citizens, in a series of scams. Victims in Germany told Turkish police that they were forced to send money after one gang member identifying himself as "Kommissar (Inspector) Wolf" threatened them with legal action because of crimes concocted by the gang members.