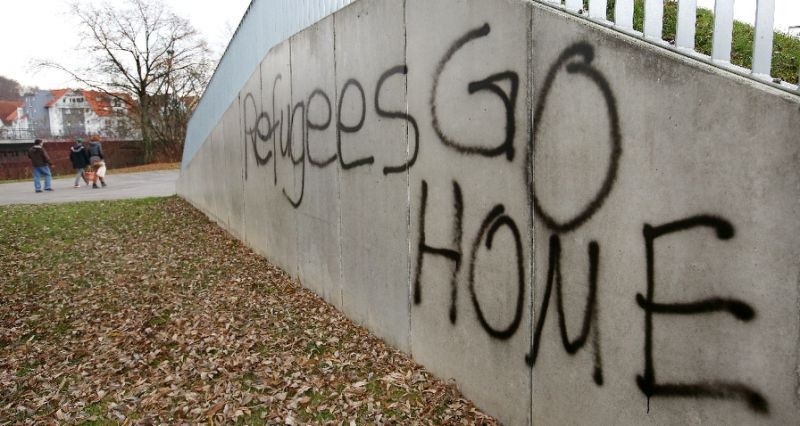 Germany has seen a xenophobic backlash to the record influx of migrants with a rise of arson attacks on refugee shelters (AFP Photo)
by Oct 07, 2016 12:00 am

One had a beer bottle flung at him on a train. Another was woken at midnight as three men holding wooden slats rang his doorbell. A third had her headscarf pulled off by a stranger in the street.

A year after they arrived in Germany seeking refuge from war, some Syrians say they have experienced so much animosity that they are contemplating leaving.

The trouble is, they have landed in the eastern state of Saxony - a flashpoint zone home to the Islamophobic PEGIDA movement that has seen a spate of racist hate crimes.

"It's too scary here," said Fares Kassas, victim of the train aggression.

"The man threw the bottle just as the door was closing and the train left the station. There was nothing I could do," said Kassas, who has obtained refugee status in Germany but is now contemplating leaving for Turkey, where his parents are living.

Mohammad Alkhodari, who spoke of a car that pulled up next to him with men preparing to beat him before he ran away, said he avoids going out after 6:00 pm.

"I am so stressed that I have developed a stomach problem," he said.

In Saxony, the number of far-right crimes, including assaults against asylum seekers and arson at refugee homes, tripled to 784 last year compared with 235 in 2014.

Both Kassas and Alkhodari are in the town of Freital, scene of anti-migrant demonstrations a year ago.

The area is linked to two neo-Nazi groups that plotted attacks against refugees but were dismantled by security forces last year.

In a report last month taking stock of the quarter century since reunification, the government warned that growing xenophobia and right-wing extremism now threaten peace in eastern Germany.

"Eastern states are bad states for refugees. It's hard to find apartments. There are no jobs and no contact with locals," said Alkhodari, a dental hygienist who desperately wants to move to western Germany.

The arrival of 890,000 refugees last year has deeply polarised Germany, and misgivings against the newcomers run particularly deep in eastern states like Saxony.

The former communist state has become fertile ground for the far right, with unemployment fuelling resentment and xenophobia.

"They should all just disappear," said a man in his fifties, when asked what he thought of the refugees in Saxony.

Enrico Schwarz, who runs an association in Freital that has been helping Kassas and Alkhodari, said "latent racism and latent right-wing radicalism" has always existed in German society, but "at this time of the refugee movement, they have become bolder."

He said eastern Germans were more susceptible to xenophobia because many felt like migrants in a new country when Germany reunited.

"And (they feel) threatened by other migrants who are arriving now," he said.

Right-wing extremists are capitalising on fears with arguments such as "they're taking jobs away, or they'll drive health insurance contributions up", and lines are gradually blurring between those who are stirring up hate, and others who are simply worried about their future.

Erdmute Gustke, pastor at a church in Heidenau - another Saxony village hit by violent anti-refugee demonstrations - said some saw the migrant influx as another unwanted change affecting their lives.

"There is a feeling of 'leave us in peace, we've only just found our way after reunification and now we're facing something new again,'" she said.

"Before this social media explosion, people were probably racist but they kept it to themselves," he said.

Now they see that "they are not alone."

Lalonde helps out weekly at a small village that few had heard of before February.

But Clausnitz gained notoriety after a bus carrying refugees was mobbed by a marauding crowd.

"They shouted things like 'we will kill you'. They were drunk. We were so scared," said Afghan asylum seeker Sadia Azizi.

Six months on, two dozen refugees still living there complain of isolation as most locals have kept a distance and only German is spoken.

"There is no one to talk to," said Lebanese asylum seeker Majdi Khatun.

Some however have made an effort to reach out.

Khatun's son Luai, 15, spoke of schoolmates who help with homework or lend him notes to copy when the teacher's German is too rapid for him.

"There are no Nazis here," Luai said before greeting an elderly German couple.

"Did you like the marmalade? I've also packed some cake for you," said the woman who called herself "Luai's Deutsche Oma", or German grandma.

Lalonde admitted that it is "discouraging" that these efforts are often overshadowed by xenophobia.

"But I get motivated when I hear about a new attack because it means we have more work to do," he said. "And we can't give up."