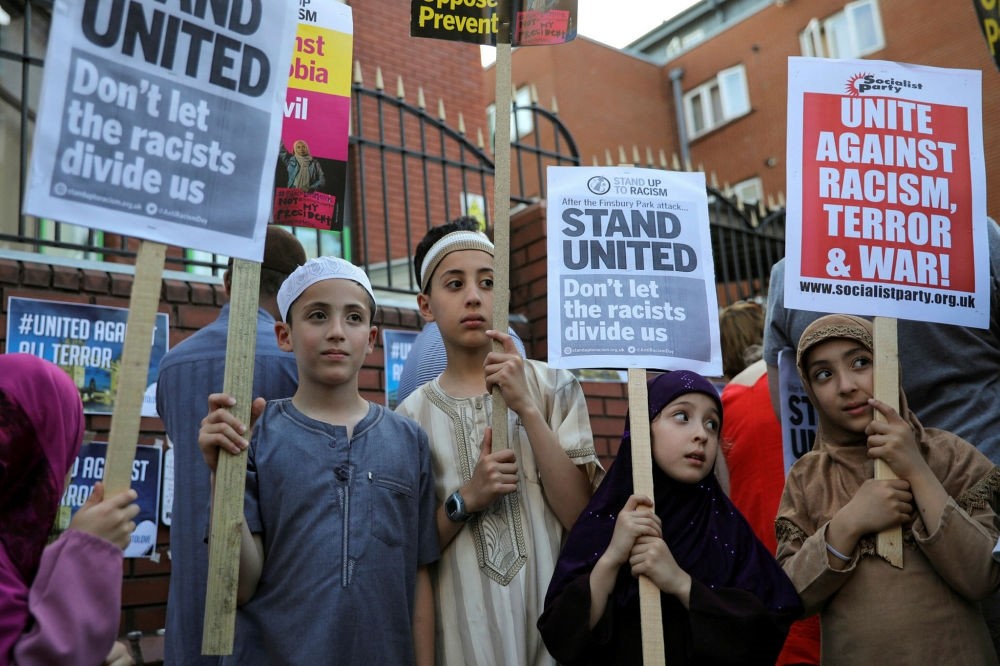 Children hold placards during a vigil near to where a van was driven at Muslims in Finsbury Park, North London, Britain, June 20.
by Compiled from Wire Services Jun 23, 2017 12:00 am

As the number of white Brits arrested in terrorism-related offences increases, Muslims in the U.K. are suffering because of rising hate crimes in the country

Anti-Muslim hate crime has skyrocketed by more than 500 percent following the May 22 concert suicide bombing in the city, Manchester police said yesterday. The number of Islamophobic crimes recorded by the Greater Manchester Police between May 22, 2017 - the date of the deadly attack by Salman Abedi - and June 19, 2017 was 224.

This is a sharp increase from 37 in the same period last year, according to police figures. The increase rate is 505.40 percent.

Anti-Muslim hate crime was already on the rise - by 186 percent - in April (April 22 - May 17) before the Manchester attack, which left 22 dead and dozens injured. This surge was prompted by the major terror attacks in Manchester and London, said a senior police chief.

"When a major tragedy occurs such as the attacks in Manchester and London, it is sadly not unusual for there to be a spike in the amount of hate crimes, specifically against race and religion, but thankfully they do decrease again quickly," Greater Manchester Police Assistant Chief Constable Rob Potts said in a statement.

British Prime Minister Theresa May said on Wednesday that no matter what disagreements exist, "we can all at least welcome the focus in this Queen's Speech on stamping out extremist and hateful ideology of any kind, including Islamophobia."

May said Monday's Finsbury Park attack, where a van was driven into a group of Muslims leaving prayers, was a terrorist attack and described it as a "brutal and sickening reminder that terrorism, extremism, and hatred can take many forms". London's Metropolitan Police yesterday formally identified a 51-year-old father-of-six who died at the scene of Monday's attack as Makram Ali, originally from Bangladesh.

Until this week, the assassination of lawmaker Jo Cox a year ago was the most visible manifestation of the darker undercurrents at play among far-right fanatics in Britain. But many Muslims say they have long been suffering from daily abuse that has only intensified as tensions surface over flashpoints such as Europe's refugee crisis and Britain's Brexit vote to quit the EU.

Some attacks are physical or verbal, others involve graffiti, the hurling of feces and vomit, or smearing bacon on car windscreens.

According to government statistics, British whites accounted for 91 of 260 arrests for terrorism-related offenses last year, an increase of 28 percent from 2015 and the only ethnic group to show an increase.

Fiyaz Mughal, founder of Tell Mama, a group that collates figures on anti-Muslim incidents, said the hatred that appeared to have motivated the far-right groups did not come from nowhere.

"But sadly, whenever you have a major incident, you have headlines and opinion writers who are allowed to spew out some of the most inflammatory content simply to spawn clickbait and newspaper sales," Mughal told AFP.

"It makes what people feel privately respectable and real," he said, arguing that an attack like Osborne's was inevitable in that context.

Raffaello Pantucci, a counter-terrorism expert at the Royal United Services Institute, concurred that the spread of "poisonous rhetoric" from far-right websites to mainstream media and politics legitimized it in public discourse.

"It's unfortunately a vicious circle," he said, pointing to extremist reactions among some Muslims, "and it's going to be hard to stop in this febrile atmosphere."

Guardian cartoonist Martin Rowson responded to the Finsbury Park attack with a drawing of Osborne's hired van bearing an advertisement on the side: "Read The Sun and Daily Mail."