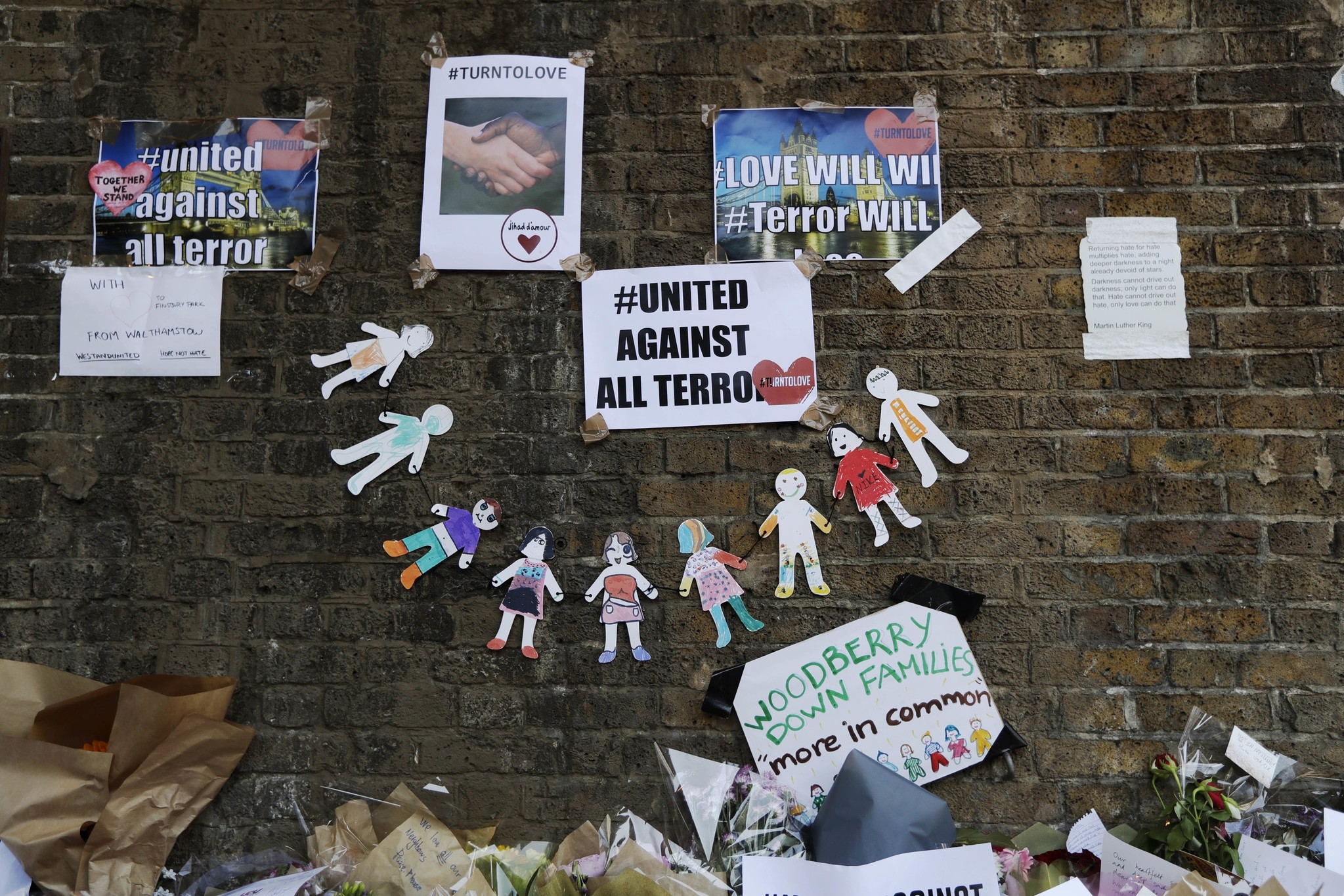 Written tributes of unity are displayed after being placed by the scene of an attack where a man drove into a group of people near a mosque early Monday morning, June 20, 2017. (AP Photo)
by Anadolu Agency Jul 02, 2017 12:00 am

As anti-Muslim hate crime in the U.K. surges many British Muslims are living with the reality of increased threats, abuse and assaults. A string of attacks -- even including the use of corrosive acid -- have taken place, including the deadly June 19 terrorist assault on Muslims near a north London mosque.

Finsbury Park Mosque has once again found itself the focus of anti-Muslim hate as it was revealed that anonymous letters sent in the two weeks following Jun 19 attack -- in which one man, 51-year-old Makram Ali, died -- threatened Muslims with more violence, according to Mohammed Kozbar, chairman of the mosque.

Kozbar told Vice News he was concerned another attack might be imminent, as one letter read: "The attack using the van was only the beginning."

The letter openly threatened Muslims, claiming "the fun will continue this August".

"There will be rivers of blood flowing down the streets -- I will make sure of this. None of you vermin will survive. I mean who would survive being gassed, or beheaded, or blown up,'" the letter read. 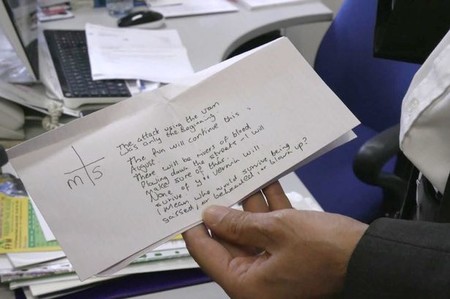 Kozbar said the threats had been reported to the police.

"We wanted to re-assure mosques that when we come across such material, and when it is reported to us, we get in touch with police partners and inform them of such activities," it said.

Muslim women also appear to have been targeted in a series of verbal and physical assaults.

On Saturday, one British Muslim blogger described how her mother and a female friend were attacked in east London.

The author, Madge, writing on theempoweredprole.wordpress.com, said they were assaulted by a number of men after being approached for directions:

"Yesterday morning my Mum and her friend (both of whom wear niqab - the face veil), were violently attacked by a white man in Newham, Plaistow, as they were going home after a school run."

One of the men reportedly asked the woman why she was wearing niqab, before punching her and dragging her on the ground.

More online video from Saturday shows another attack in a London park. A Muslim woman was left injured in Bethnal Green by a man who was then restrained by members of the public.

In an earlier attack, as shown in more footage released online, a group of Sudanese women and children were assaulted by a gang of men and women in a park in Oxford, north of London.

Some of the Muslim women's headscarves were torn off in the assault. The incident seems to have taken place during recent Eid al-Fitr celebrations.

Thames Valley Police said "racist language" was used in this attack and confirmed one person had been taken to hospital and another was treated by paramedics.

The Oxford Homeless Project said a woman had been knocked unconscious in the attack.

"Sudanese women and children attacked by #racist mob in #Florence park on #Eid in Oxford! Wom[a]n unconscious but ok now!" Shabnam Sabir from the charity tweeted.

In a separate development, a man who abused two Muslim women in north London was jailed after "admitting to religiously/racially aggravated assault," according to a police statement issued on Friday.

Alex Chivers, 36, made abusive, Islamophobic comments, calling the victim who was walking with her mother "ISIL scum" and shouting "You deserve this," before striking one of them in the face with a packet of bacon, police said.

Two men, one of whom threatened to "chop all Muslims", were arrested on Friday in the Welsh capital Cardiff, U.K. media reported.

However, an eyewitness quoted in various media outlets said one of the men had been armed with a large blade: "I saw a guy get arrested and the police officer hold the knife -- it was massive."

One of the most disturbing attacks came in London on June 21, when two Muslim cousins were hit with a corrosive substance flung at them while they were parked in traffic in the Canning Town area.

Speaking to Channel 4 News, Jameel Mukhtar said: "I believe it was something to do with Islamophobia or maybe he's got it in for Muslims because of what's been going on lately."

Mukhtar, 37, was in a car with his cousin Resham Khan who was celebrating her 21st birthday when they were sprayed with a corrosive substance.

Police -- who have since said they are treating the incident as a hate crime -- released an image of 24-year-old John Tomlin in connection with the attack and appealed for information about his whereabouts. A police statement warned the public not to approach Tomlin.

"Both victims received life-changing injuries," according to police. Horrific pictures of the injuries received by Resham Khan have been shared on social media.

Across the Irish Sea, a Turkish takeaway restaurant was targeted in Northern Ireland's capital Belfast last week when the words 'Muslim scum' were sprayed on the premises.

The Police Service of Northern Ireland (PSNI) described the incident as a racially-motivated hate crime.

Hasan Khader, the Jordanian owner of the shop, said he was shocked to discover the damage at the Turkish Kebab and Pizza House, on Beersbridge Road, east Belfast.

A manager of the shop, speaking to Anadolu Agency, described the attackers as "animals" in what he said was the first-ever such incident at the business.

The PSNI also said three individuals had been arrested "as a result of an investigation following reports of anti-Islamic material being displayed in the Armagh area, which was reported to police on June 21, and the discovery of material in Newry on June 21".