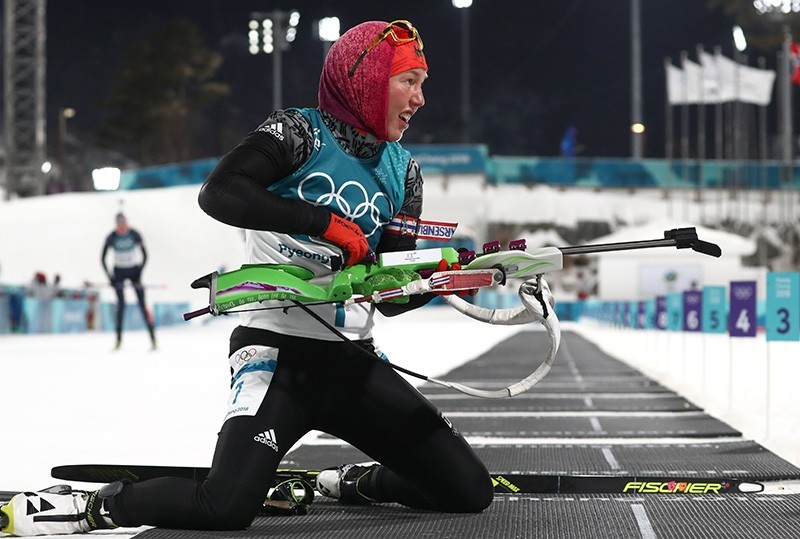 Laura Dahlmeier of Germany in action during the Women's Biathlon 10 km Pursuit race at the Alpensia Biathlon Centre during the PyeongChang 2018 Olympic Games, South Korea (EPA Photo)
by Daily Sabah Feb 12, 2018 12:00 am

The plans for a multi-faith prayer room during Winter Olympics in the South Korean city of PyeongChang have been canceled after opposition from anti-Muslim protestors, reports said Monday.

The Korea Tourism Organization (KTO) had to scrap the plan for a prayer room in Gangneung, where the indoor games are taking place after anti-Muslim groups voiced such strong opposition that the officials "could no longer do their jobs," Al Jazeera reported.

The director of another Islamophobic organization, the Islam Countermeasure Association also told Al Jazeera that Muslims should refrain from prayers at the Olympics.

Other similar groups also opposed the distribution of halal food in cafeterias during Winter Olympics.

Meanwhile, a representative from the Korean Muslim Federation said that Korea lacks the thoughtful understanding as the host country of the Olympics, and highlighted that the establishment of prayer rooms was not only for Muslims but for people from different faiths.

In 2016, the KTO had urged more restaurants to serve halal food, as part of efforts to draw more Muslim tourists in the country.

Islam was re-introduced in the Korean peninsula by the Turkish Brigade in 1950, which fought the Korean War under the command of the United Nations.