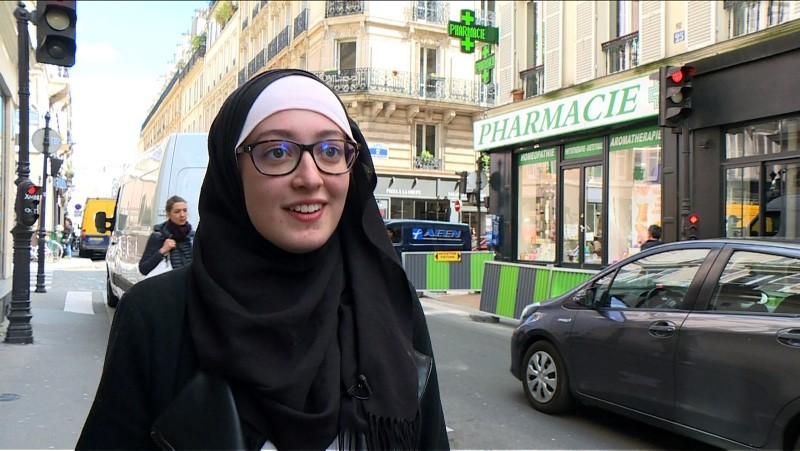 In this video grab image taken on May 2, 2018, Union President at Paris-Sorbonne University (Paris IV) Maryam Pougetoux walks down a street in Paris (AFP Photo)
by Jan 23, 2019 1:37 am

French Interior Minister Gerard Collomb on Friday said he found it "shocking" that a student union representative wore an Islamic headscarf while being interviewed on television last week.

Collomb was the latest public figure to join the fray in criticizing the attire of Maryam Pougetoux, a representative of the left-wing student union UNEF at Paris's Sorbonne University whose interview was broadcast on M6 television news on Saturday.

The 14-second clip showed Pougetoux explaining UNEF's opposition to a new university admission system. The union has supported student sit-ins in several universities against the measures, which it says are too selective.

"We want an education for everyone... so that students are given the chance to do what they want and the capacities of universities are not, for example, decided on the basis of the labor market," Pougetoux told M6, using gender-inclusive language in French.

Her apparel triggered backlash in France, where wearing the Islamic headscarf is seen by many defenders of the country's secularist traditions as a symbol of one's adherence to political Islam.

"It [the veil] must not represent a wish to establish an identity that marks one as different from French society," Collomb told broadcaster BFMTV.

Earlier this week, France's equality minister questioned whether it was appropriate for UNEF to have a representative wearing a headscarf. Marlene Schiappa told public broadcaster FranceInfo the union "should tell us what values it wants to promote, clearly and coherently."

UNEF hit back, saying that Pougetoux had been attacked "because she is a woman, a Muslim, wearing the veil, but also a student with a union position."