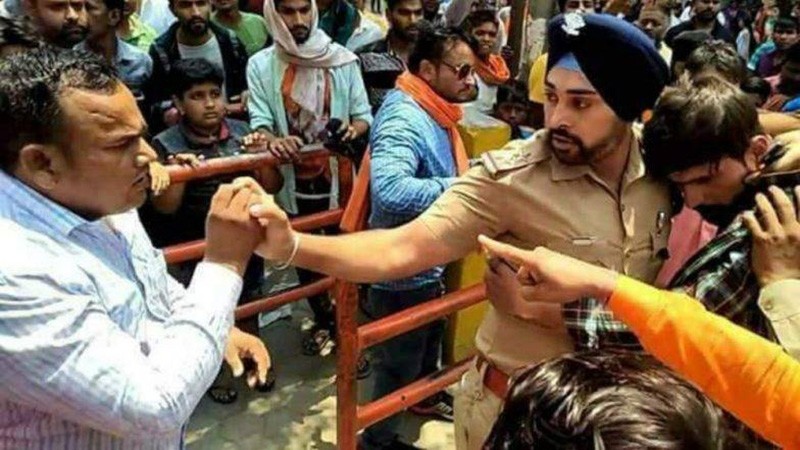 An Indian police officer who saved a Muslim man from being lynched by a Hindu mob is now receiving death threats and been forced to go on leave.

A video of Gagandeep Singh protecting the man – who was visiting a temple with his Hindu girlfriend in the northern Uttarakhand state – went viral on social media last week. While some initially hailed Sikh police officer as a hero, others have expressed vengeful outrage at his defense of the interfaith couple.

Relationships between Muslims and Hindus are a point of contention in India, where religious radicals have coined the term "love jihad" to accuse Muslims of seducing Hindu women in order to convert them.

Singh was initially praised as a "role model" for his actions, with the story featuring in mainstream Indian publications.

"I was just doing my duty. Even if I was not in uniform, I would have done the same thing and every Indian should do the same," Singh told DB Post.

"If the issue is saving the life of a person, religion should not come in the way. I would have failed in doing my duty if I would not have saved him," he said.

However, Singh soon began receiving threats to his life, police say. Even some politicians publicly sided with the mob.

"It's wrong when these people (Muslim men) bring Hindu girls to our places of worship despite knowing it's a temple and it's pious," ruling Bharatiya Janata Party (BJP) lawmaker Rakesh Nainwal told BBC.

"Why did these men go to our temple with an intention to destroy the Hindu culture?" another BJP politician Rajkumar Thukral told the ANI News Agency, adding that Hindus do not "have the right" to go to a mosque.

But some residents of the Ramnagar district, where the attack occurred, have expressed disgust at the poor treatment of Singh, who has now been sent on leave by the police department.

"When a boy and a girl go somewhere together by choice, then how can these right-wing groups call it a case of 'love jihad' and attack them?" resident Ajit Sahni told BBC.