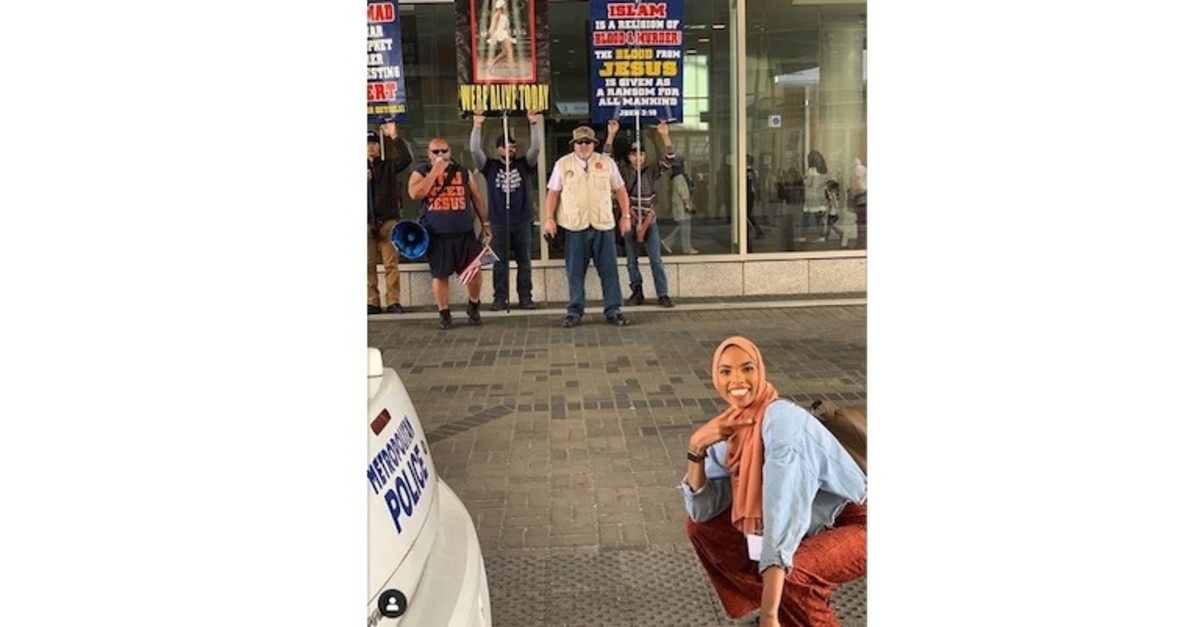 Shaymaa Ismaa'eel, a behavioral therapist in Washington, became an internet phenomenon after a photograph of her posing in front of an anti-Muslim demonstration went viral.

Ismaa'eel, a Muslim woman who wears a hijab, posted a picture on social media of herself smiling and waving a peace sign in front of demonstrators, who had been holding up signs saying "Islam is a religion of blood and murder" and "Muhammad is a liar."

The 24-year-old was attending the Islamic Circle of North America (ICNA) convention Saturday-an international gathering of thousands of Muslims.

She told BuzzFeed News the first thing she saw when she went to the conference was a group of men with signs protesting outside.

"Most people were very upset and didn't know how to embrace their presence. Some teens were getting upset, trying to approach the men," she told the news outlet.

Ismaa'eel decided to respond to the protesters in a non-confrontational manner, smiling in a photo while they continued to raise Islamophobic signs at Muslims.

She told The Guardian newspaper she had gotten inspiration from a panel at the conference that discussed the terrorist attacks in New Zealand, in which the speaker mentioned the first victim of the attack had greeted the terrorist by saying "Hello, Brother."

"On April 21st I smiled in the face of bigotry and walked away feeling the greatest form of accomplishment," she said in her tweet along with the photos.

Her photo has received more than 183,000 likes on Instagram and north of 200,000 likes on Twitter. It has also been shared countless times, with others calling for the photo to be placed in a museum.

"This is hands down the greatest thing I've ever seen in the history of the internet," twitter user, Sarki, said about Ismaa'eel's post.