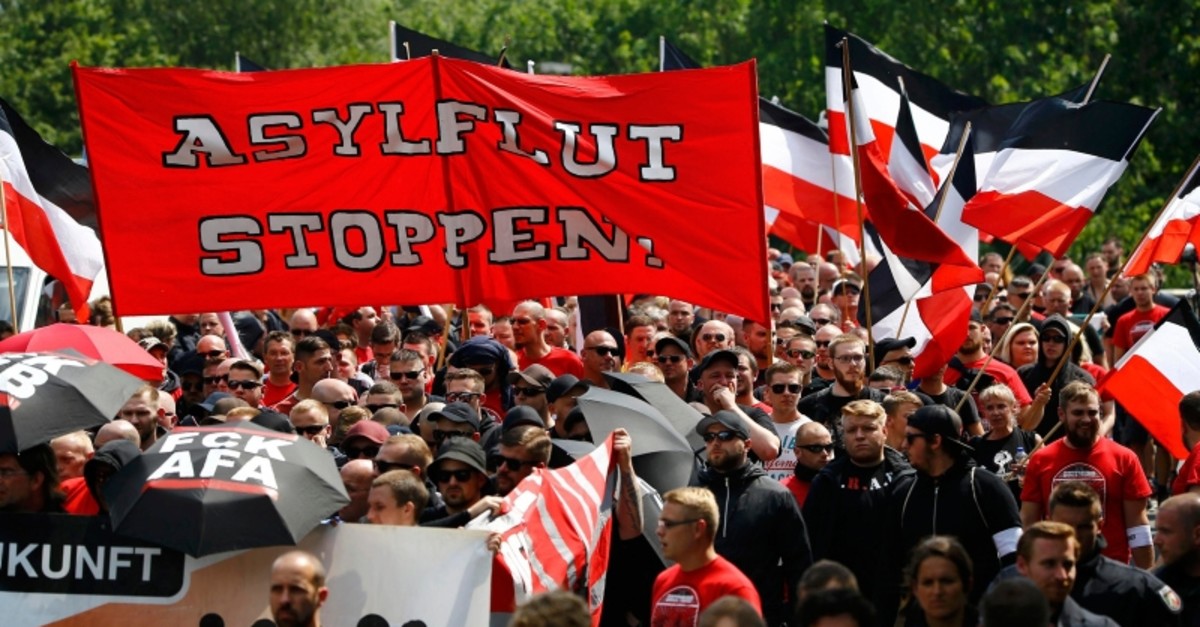 Far-right supporters hold up a banner reading ' stop the flood of asylum seekers' during a demonstration march in Dortmund, Germany, June 4, 2016. (Reuters Photo)
by Daily Sabah with DPA Jun 12, 2019 10:42 am
Hate speech and xenophobia became major concerns no longer relegated to the margins of European politics in 2018, according to an expert commission of the Council of Europe.

An annual report published Tuesday by the European Commission against Racism and Intolerance (ECRI) warned that public anxieties about global political and economic changes were increasingly being "exploited by those scapegoating migrants and minorities."

"The growing public anxiety about economic, geopolitical and technological changes was exploited by those scapegoating migrants and minorities, in particular populist politicians aiming at dividing societies along national ethnic or religious lines," the report said.

The commission warned against populist initiatives that are aimed at "dividing societies," as well as ideologies that presume an "incompatibility" between different ethnic, national or religious groups in society.

"Not only were such views expressed by fringe politicians, but they increasingly gained footing within mainstream political parties and national governments," the ECRI said in a statement.

The report emphasized that anti-Muslim and anti-immigrant sentiment were still prevalent in most member states in 2018. "Muslim women were frequently the targets of violence, which often involved pulling off face veils and headscarves or being spat at," it said. Also, Jewish people in Europe continue to be confronted with anti-Semitic hatred, including violence, the report added.

Anti-Muslim hatred has significantly risen in Europe. Far-right extremism and xenophobia have fueled anti-Muslim hatred in Western countries, where terror attacks by Daesh and al-Qaida are used as an excuse to legitimize those views. Although enmity toward Muslims is not a new phenomenon, it intensified after 2001 when airplanes crashed into the World Trade Center in New York City. Since then, for almost two decades, Islam has been unjustly tarnished with labels that have negative connotations and portrayed as a religion of hate and violence with anti-Western sentiment and women's oppression. This trend of intolerance has triggered deadly attacks against Muslims and immigrants since then.

With growing racism emerging as a serious problem in almost all EU states, citizens of foreign origin are more vulnerable in some countries. For example, in Germany, Muslims have become targets of countless attacks in recent years. According to a report by the Leipzig-based Competence Center for Right-Wing Extremism and Democracy Research published last November, the country has been showing increasingly hostile attitudes toward immigrants, the Muslim community and other minorities such as the Roma, with one-in-three Germans thinking foreigners come only to exploit the welfare of the state.

The ECRI has also raised alarms about the increasing spread of "fake news" that often produces distorted images of vulnerable groups, and called on politicians, religious and community leaders to not only avoid using hate speech, but to proactively counter it.

The Council of Europe is based in Strasbourg and has a mandate to monitor human rights in its 47 member states. The ECRI is one of a number of committees that examine different aspects of human rights as part of the council's mandate.