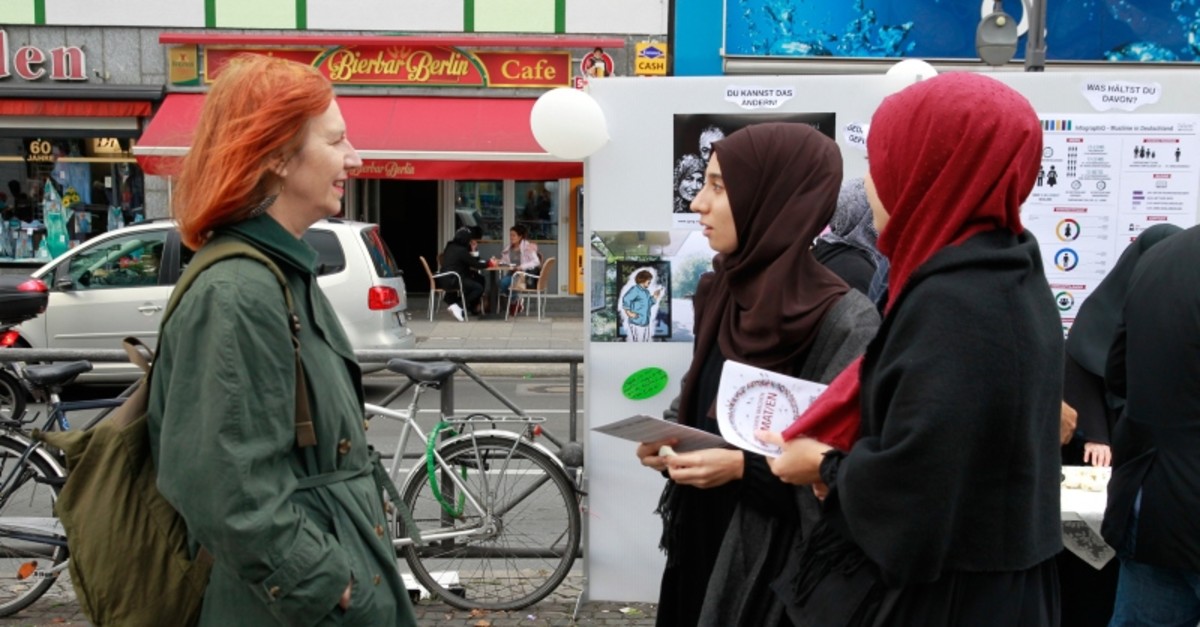 One of the 25 events organized in Germany and the Netherlands by IGMG to raise awareness on the discrimination Muslim women face in their daily life in Berlin, Germany, Sept. 28, 2019. (AA Photo)
by Daily Sabah with AA Sep 29, 2019 3:07 pm

Muslim women were attacked by a man with a knife at a "Support Diversity" event in the southern German city of Ulm according to the event organizer. The event was meant to raise awareness on increasing anti-Muslim sentiments in the country and was organized by the Turkish-Muslim association (IGMG).

Bekir Altaş, the head of the IGMG, condemned the attack at the peaceful event. "At a stand set up at the event, the man first verbally attacked our girls, and then attacked our staff with a knife," Altaş said. Since the attack was stopped at the last moment, no one was injured and the attacker was arrested.

Twenty-five events in Germany and the Netherlands were organized to raise awareness on the discrimination Muslim women face in their daily life. The head of communication of the IGMG Ilknur Küçük said in Cologne that Muslim women, especially those wearing headscarves, face frequent discrimination daily and even verbal or physical violence.

Esma Taner, head of communication for the Netherlands Islamic Federation (NIF) Women's Organization said they hoped prejudice against Muslim women will disappear "We are also living in this society. Just as everyone is living and is accepted as they want, we also want to be accepted that way. Even asking a woman with a headscarf 'isn't it hot' is not nice."

Germany, a country of over 81 million people, has the second-largest Muslim population in Western Europe, after France. In recent years, increasingly hostile attitudes toward immigrants and the Muslim community have been reported. The number of attacks on Muslims and Muslim institutions in Germany has been around 570 in 2018, lower than in 2017. However, the number of people who were injured in anti-Muslim attacks has increased, compared to 2017, according to German media.

From January to September, authorities counted 578 attacks on Muslims, mosques and other institutions in Germany. The figure is well below the approximately 780 anti-Islam offenses committed in the first nine months of 2017. According to German regional newspaper Neue Osnabrücker Zeitung, 40 people were injured in attacks in 2018. This marks a significant increase compared to 2017, when 27 were reported in the same period and a total of 32 injured in the year as a whole.