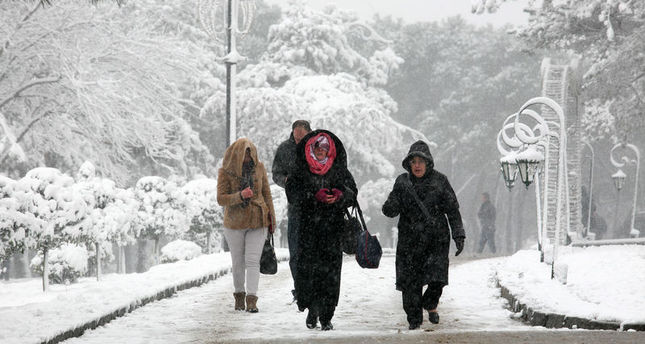 by Daily Sabah Dec 30, 2014 12:00 am
Istanbul was gripped with snowfall yesterday as the much-anticipated precipitation blanketed the city.

Sleet evolved into snowfall starting from Monday evening, covering the higher ground in the city's northern and western parts and dealing a blow to traffic during the rush hour on the main roads.

Along with the snowfall, strong winds, with speeds of up to 70 kilometers per hour, battered the city, knocking down trees, billboards and tearing apart roofs. The bad weather led to cancellations of ferry services and flights yesterday. Ferries and sea buses connecting Istanbul to other cities were cancelled until yesterday afternoon.

Turkish Airlines cancelled domestic flights between Konya and Istanbul, and Ankara and Istanbul as well as an international flight between Istanbul and Budapest yesterday. No flight cancellations due to bad weather have been announced for today.

The snowfall mostly affected Kartal and Şile on the Asian side and the Hadımköy and Çatalca districts on the European side.

Heavy snowfall will affect the city today, according to weather forecasts, along with the northwestern provinces of Turkey. Forecasters also warned against strong winds of up to 100 kilometers per hour in Istanbul and its vicinity.

As the cold weather took hold, Istanbul municipality workers started combing the city for homeless citizens. Over 300 homeless persons were transported to a sports hall where they were accommodated.