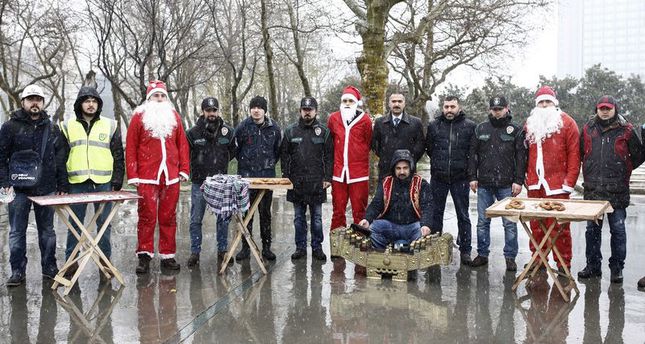 by Daily Sabah with AA Dec 31, 2014 12:00 am
All the precautions have been taken for Istanbulites to enjoy the New Year's Eve in safety and peace, Istanbul Governorate have stated.

According to the statement released by the Governorate, all the safety and security measures have been taken in areas which will attract the most people due to celebrations on New Year's Eve, including shopping centers, bus stations, squares which will host special events, and entertainment districts.

Besides being a huge night for Istanbulites, New Year's Eve will also be a hard night for the security forces. Nearly 15,000 police will be working across the city during the celebrations.

Additional traffic police will also be working to ensure a smooth flow of traffic and minimize congestion.

Istanbul Security Forces Department said on Wednesday that additional undercover police officers will be present to avoid any unsafe activities and that they had also increased the number of mobile electronic system integration (MOBESE) cameras in crowded places, such as Beyoğlu, Beşiktaş, Kadıköy and Bakırköy.

Istanbul's public transportation authority, Istanbul Electricity, Tramway, and Tunnel General Directorate, (IETT) has also stated that there will be an additional 112 bus services to support the current bus schedules.

An additional 11 metrobus services will also operate until the morning and the residents will be able to call "ALO 153" for assistance regarding the public transportation.
Last Update: Jan 01, 2015 2:46 pm
RELATED TOPICS