Heavy snowfall closes schools in Istanbul for another day 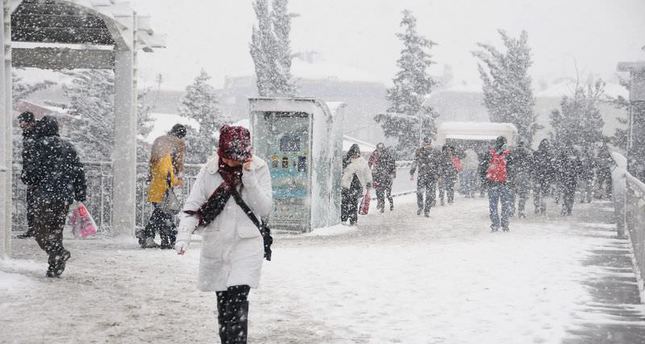 by Daily Sabah Jan 06, 2015 12:00 am
Schools in Turkey's largest city, Istanbul, will be closed on Wednesday due to extreme cold weather, Istanbul governorate announced.

According to the Turkish State Meteorological Service, temperatures in Istanbul on Wednesday will be between - 1°C to -3 °C.

Schools were also closed on Tuesday in Istanbul due to heavy snow.

The Istanbul municipality said it had taken precautions against ice and traffic congestion on Monday night with over 2,000 personnel and 1,000 vehicles removing snow.

Some ferries crossing the Bosporus have also been cancelled.

Schools were also closed in the provinces of Malatya, Kastamonu, Bingöl, Ordu, Bitlis and Tunceli because of strong winds and snow. Many roads across the country have also been closed.

Turkish Airlines said it has cancelled 41 domestic and 10 international flights because of the bad weather.

Authorities have been warning for days that the cold spell would be unprecedented, saying the temperatures might drop to as low as - 20°C for Istanbul.
Last Update: Jan 07, 2015 10:02 am
RELATED TOPICS