Dumping habits give way to bomb scare in Istanbul 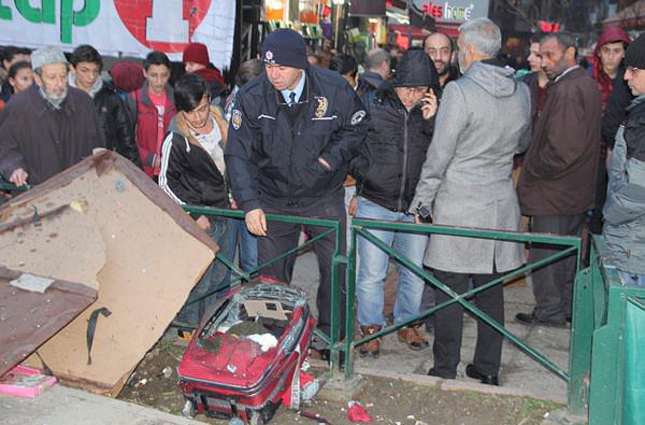 by Daily Sabah Jan 20, 2015 12:00 am
A series of false bomb scares in Istanbul, Turkey's most populated city, have challenged police, who are warning the public not to dump their old suitcases or garbage in crowded areas after "bombs" defused in four separate instances over the past two days turned out to be false alarms.

The city of 14 million is on edge after a suicide bombing in Istanbul's bustling Sultanahmet (Blue Mosque) Square earlier this month that killed one policeman. The attack prompted security forces to be more cautious regarding bombings and mysterious packages sighted in busy areas, triggering fears of a new attack. Indeed, the threat is real, as demonstrated by last Sunday's discovery of two bombs in the Maltepe and Fatih districts. A homemade explosive device was found in Maltepe, near a police station, with a note attributed to the terrorist organization PKK. Experts defused it, but a second bomb exploded near a power transformer in Fatih on the city's European side, although there were no casualties.

As the city breathed a sigh of relief, a large bag casually dumped on the roadside near a busy metrobus station in Zincirlikuyu on Monday, raised concerns. Police were called to the scene and conducted a controlled explosion of the bag. The contents of the bag were found to be a small stand and a number of bootlegged cigarettes. Bootlegged cigarette sellers frequent the area and sometimes dump their stash when municipal police raid their stalls.

A couple of hours later, another bomb alert was reported in the district of Yenikapı. A suspicious bag was sighted at a Marmaray station, part of the underwater tunnel where a train connecting the city's Asian and European sides operates. Police sealed off the station before defusing the "bomb." This time, empty boxes were found inside the bag.

The bomb scare did not end on Monday, as two more suspicious packages turned up in Sarıyer and Eyüp. A suitcase placed on top of a car's trunk in Eyüp prompted concerned citizens to alert the police, who seized it, only to find it empty. Another empty bag was torn apart by a bomb squad in Sarıyer a few hours later after it was spotted near a traffic sign in Sarıyer's Tarabya neighborhood.

Istanbul, one of the most popular cities among tourists, has been the scene of various terrorist attacks in the past, claimed at separate instances by the PKK, al-Qaida and the Revolutionary People's Liberation Party-Front (DHKP-C).