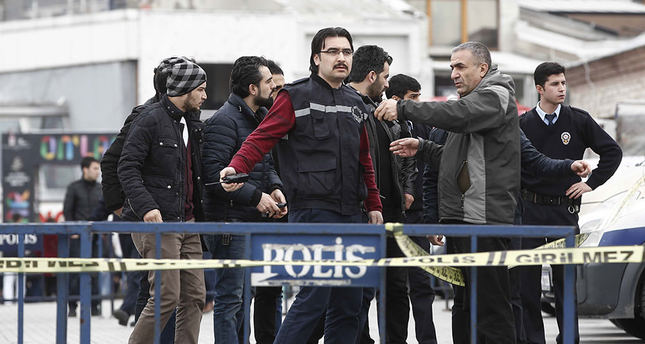 by Daily Sabah with Agencies Jan 30, 2015 12:00 am
A blonde woman dressed in black attacked the police outpost in Istanbul's Taksim Square with an AK-47 rifle and a pistol around 2:30 p.m. on Friday.

Security camera footage emerged after the attack that shows the woman running by the vehicle and spraying it with bullets before heading into an alley. Her automatic weapon and a bag apparently belonging to the woman were found in the alley.

No injuries were reported from the scene as the bullets hit police vehicles.

The woman left the crime scene on foot, leaving her gun and dropping some of her belongings.

Meanwhile, bomb units were dispatched to the square to examine a suspicious package and the area was sealed off.

Turkish police launched a manhunt to capture the suspect. No one claimed responsibility for the attack, but Turkish media outlets speculated the woman might be a member of terrorist organization Revolutionary People's Liberation Party-Front (DHKP-C). On Jan. 1, a DHKP-C militant launched an attack with a rifle and grenades on a police post in front of Istanbul's Dolmabahçe Palace, but he was subdued when his rifle jammed and grenades did not explode. It was followed by another attack on Jan. 6 in Istanbul's Sultanahmet Square initially claimed by the DHKP-C where a female suicide bomber killed herself and a police officer. DHKP-C later retracted its claim of responsibility and the assailant was reported to be a Russian national.