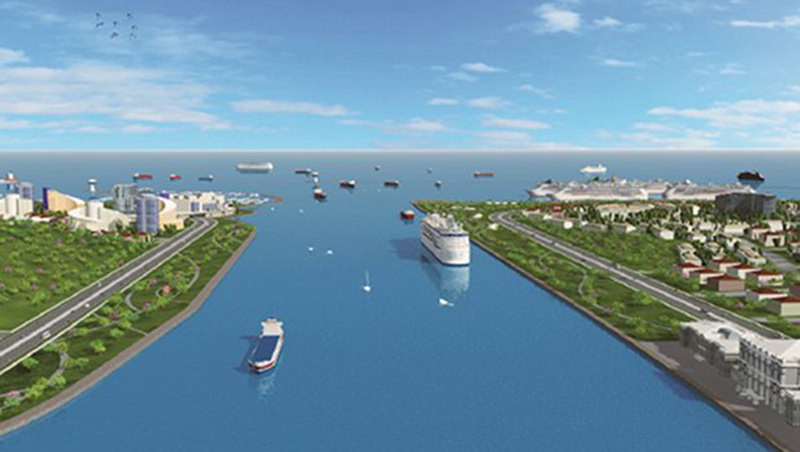 by Daily Sabah Feb 24, 2015 12:00 am
Details about the Kanal Istanbul Project, an artificial sea-level waterway and a new town to be located across 95 acres of land, have been released, indicating a downsizing of original plans.

It has reportedly been decided that the projected population and the number of bridges in the new town, which are to be established around Kanal Istanbul should be decreased. According to the new details, there will be six bridges and the town's population is expected to be around 500,000 rather than 1,200,000 as previously estimated. The buildings will be a maximum of six-stories tall.

The urban design project was re-discussed in a meeting in which President Recep Tayyip Erdoğan and ministries were present. Planning of the new town had been made with the assumption that the population would be 1,200,000. But it was later decided that this number should be halved in order to avoid population density. The new town will be built on either side of Kanal Istanbul, and each side will house 250,000 people.

The dimensions of Kanal Istanbul have also been decided as 400 meters wide, 43 kilometers long and 25 meters deep. The new town will contain conference halls, tourism centers, parks and trade centers, and will reportedly have a silhouette and be built with Anatolian Seljuk Sultanate motifs.

The Kanal Istanbul project was announced by then PM Recep Tayyip Erdoğan in 2011 and is to be built on the European side of the city, connecting the Black Sea to the Sea of Marmara leading to the Aegean and Mediterranean seas. The project plans on bisecting the current European side of Istanbul, forming an island between the continents of Asia and Europe.

A special planning office will also be set up, to construct an environmentally friendly and modern settlement within the Kanal Istanbul project. A team of scientists, architects, urban planners and sociologists will study the soil and environmental conditions, and after a workshop is held for the plan, preparations for the new city will be completed.

According to protocol between BİMTAŞ (Construction Consultancy affiliated with the Municipality)and the Spatial Planning General Directorate of the Ministry of Environment and Urban Development, the project, which will be built between Küçükçekmece and Arnavutköy districts, will be financed by the ministry.
Last Update: Feb 24, 2015 2:15 pm
RELATED TOPICS