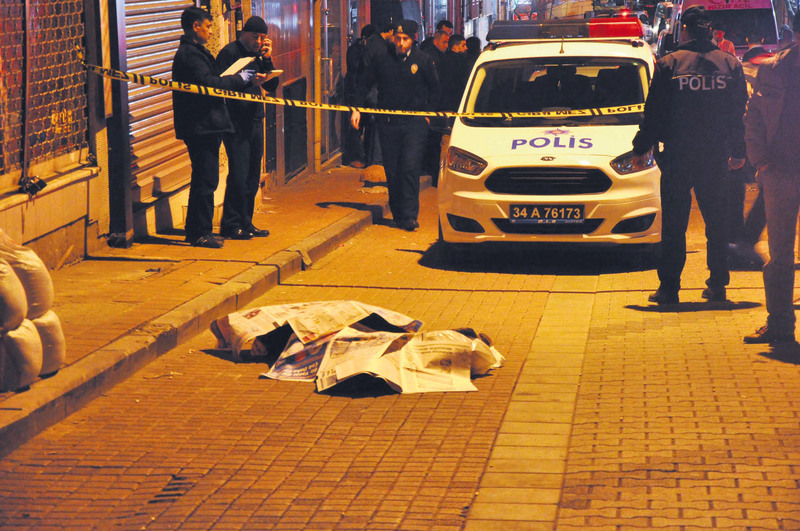 The body of Kuvatov lies on the ground covered in newspapers at the scene of the crime which was sealed off by police.
by Daily Sabah Mar 06, 2015 12:00 am

Umarali Kuvatov, leader of a Tajik opposition group residing in Turkey, was shot dead in Istanbul on Thursday night, the latest in a string of assassinations targeting Central Asian and Chechen activists

Kuvatov, who heads Group 24, a Tajik opposition movement, was shot dead in Istanbul's Fatih district, which is popular among migrants from former Soviet republics.

Conflicting reports emerged in the Turkish media on how Kuvatov was killed. Some news agencies claimed he was gunned down by a man he was arguing with on the street, while others reported he was killed by an unknown gunman who approached him as he was walking down the street with a fellow Tajik identified only as "Sulaiman" who fled the scene after the shooting.

His death came three months after an Uzbek preacher known for his opposition to the regime of Uzbek President Islom Karimov was assassinated in Istanbul's Zeytinburnu district.

Kuvatov, once close to the Tajik regime, reportedly fell out with President Emomali Rahmon and was wanted on charges of fraud and for "inciting unrest" in reference to his calls for protests against the regime. His movement, which was labeled an "extremist organization" by Tajik courts, had called for a mass anti-government protest in the Tajik capital Dushanbe last year, but the call was stifled as authorities blocked access to social media accounts and websites employed by the movement. Umedjon Solehov, a member of the group, was sentenced to 17 years in prison on March 4 for being a member of the group and insulting the president after his arrest in October 2014. Group 24 claims the charges against Kuvatov are politically motivated. The 47-year-old businessman-turned-politician fled Tajikistan in 2012 and settled in Turkey in 2013 with his family after a brief stay in Dubai. He was briefly detained in Turkey for holding an invalid visa. He has been facing an extradition request from Tajikistan formally lodged in January.

Turkish police's criminal investigation department and counter-terrorism units launched a joint investigation and manhunt to capture the suspect. Kuvatov had gone out after a dinner with "Solaiman" when the suspect approached him around 10:30 p.m. local time.

A hub of migration for people from former Soviet Central Asian republics and the Caucasus region, Turkey has witnessed a string of murders targeting activists from those countries, largely blamed on Russia and hardline regimes in their countries.

In December, Abdullah Bukhari, an Uzbek preacher known as a prominent dissident against the Karimov regime, was killed in broad daylight by a Chechen suspect in Istanbul's Zeytinburnu district. Zeytinburnu also saw a string of murders between 2008 and 2011 targeting Chechen dissidents. Six figures from the Chechen opposition were killed in attacks blamed on Russian intelligence. In February, Kaim Saduev, a Chechen dissident, died of food poisoning in Istanbul after eating food sent from Chechnya. His family has claimed the food was laced with poison during its delivery to Turkey.
Last Update: Mar 06, 2015 8:33 pm
RELATED TOPICS