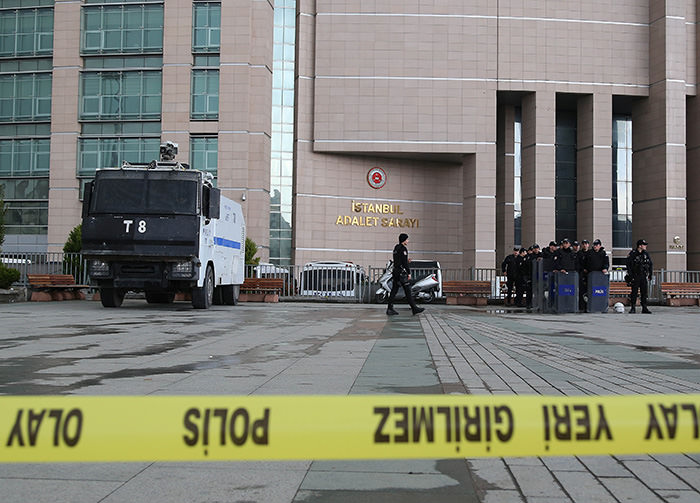 AA Photo
by daily sabah Mar 31, 2015 12:00 am
The Turkish prosecutor held during Tuesday's Istanbul courthouse hostage crisis has died in hospital where he was being treated, after he was shot twice in the head and three times in his body by the two terrorists in the hostage situation at Istanbul's Çağlayan courthouse on Tuesday evening. Turkish Foreign Minister Mevlüt Çavuşoğlu tweeted on his official account sending his condolences, while condemning the terrorists and those supporting them.

Prime Minister Ahmet Davutoğlu has held a press conference stating that all attempts were made to save the prosecutor without injury and a minute after shots were heard the operation was launched at 8:25 p.m. by the police.

The prosecutor was rushed to the hospital after the police operation and the two terrorists, identified as Şafak Yayla (23) and Bahtiyar Doğruyol (27), were killed, he added.

Despite all the attempts to save the prosecutor, he passed away at the hospital where he underwent an emergency surgery, Davutoğlu said.

Davutoğlu continued by saying, "We will take all steps to make sure lawyers go through x-ray machines upon entering the courthouses. This attack has been made against the Turkish democracy. We have to stand side by side as a nation."

"The publishing of the photos from the scene has impacted our fight against terrorism negatively," Davutoğlu added.

The police had launched the operation around 9:00 p.m. where there had been gunshots heard in the building. Istanbul Police Chief Selami Altınok announced that the courthouse hostage situation had ended, two terrorists had been killed, and the prosecutor had been seriously injured. The prosecutor was taken to the hospital where he underwent surgery.

The police maintained communicationa via telephone during the negoations and launched the operation as they heard the gunshots, Altınok added.

President Recep Tayyip Erdoğan has also stated that the prosecutor was shot in the head twice and three times in his body, during a press statement he made during his visit in Bucharest, Romania.