Municipality in a new drive to curb Istanbul's notorious traffic 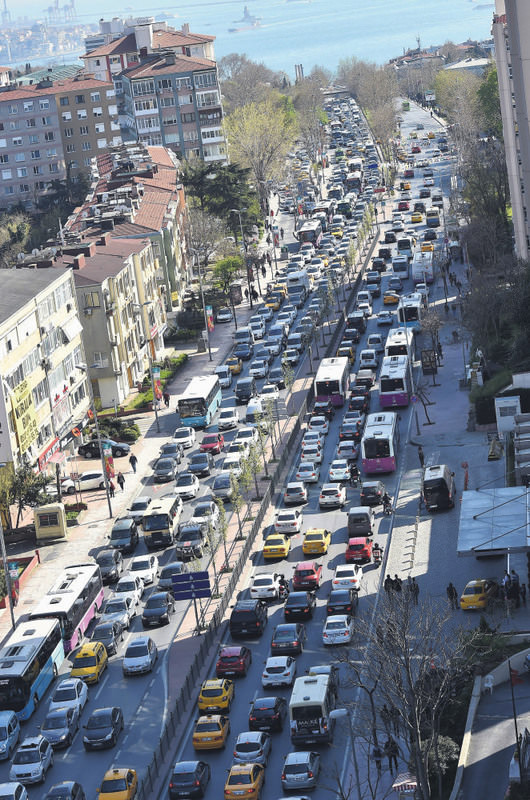 Traffic jams are particularly unbearable for millions of commuters in Istanbul in morning and evening rush hours. Bad weather and even minor accidents further clog the traffic.
by Hasan Ay Apr 17, 2015 12:00 am

It might still take years to relieve Istanbul of frustrating traffic jams, but the city's municipality is preparing to roll out a set of measures against the problem - ranging from exclusive lanes for multi-passenger cars to more parking garages and alternative routes for busy roads

Traffic is a major downside for an otherwise pleasant journey to Istanbul that attracts hundreds of thousands of tourists and migrants every year with its unique location between two continents and countless attractions.

Authorities have been looking for a solution, or rather a series of solutions, to curb the infamously bad traffic for years but with little success. The city's current municipal administration is determined to pursue further efforts to that extent, ranging from designated lanes for cars carrying more than one passenger, setting up alternative routes to ease traffic and constructing more parking garages in the city of more than 14.3 million people by conservative estimates.

Ranked high among the cities with the worst traffic - second only to Moscow according to a 2013 study - Istanbul's trouble with traffic snarls is largely attributed to haphazard development and ever-growing population, as it is a popular hub for local and foreign migrants, among other factors.

In turn, the city's municipality is looking abroad for solutions and is examining the congestion management system in use in London, Singapore, Stockholm and Milan. It includes designating routes, especially in busy districts, where motorists will be charged a fee when they enter. Municipality experts will examine whether it can be applied to at least some of the city's districts.

Another measure considered is evacuation plans on the days of major football matches, concerts and other events that attract large crowds. Routes will be planned near the site of such events before and after the events to ease the flow of traffic. Large squares that are usually used for political rallies in Yenikapı and Maltepe districts and major stadiums of Istanbul soccer teams will benefit from traffic management plans in their vicinity. Authorities also examine the effect of the exodus of holidaymakers during religious festivals that lead to kilometer-long queues on roads connecting Istanbul to other cities and plan alternative routes exclusively for the days of festivals.

The designation of exclusive lanes for cars with more than two occupants is also in consideration. Lanes normally allocated for public buses will also be open to cars with multiple occupants at pre-defined hours.

The municipality's Transportation Planning Directorate is tasked with readying policies to improve the city's 4,000 kilometer-long network of roads. Busy roads and streets will be identified through cameras installed on 200 spots that will measure the flow of traffic. The problematic routes will then be redirected to ease the traffic burden. Alternative routes will also be offered for drivers in those areas. If an alternative route cannot be provided or cannot be built, authorities plan to impose fees to enter busy areas.

The abovementioned congestion charging system will likely be implemented in the districts of Aksaray, Beşiktaş, Taksim and Bakırköy on the European side of the city and the districts of Üsküdar and Kadıköy on the Asian side. The historic peninsula, which includes landmarks such as the Hagia Sophia and Blue Mosque, may also be included in the congestion charging system.

The municipality is also mulling a change in the working hours for the private and public sector, to counteract the gridlock during the morning and evening rush hours.

Encouraging the use of mass transit is another solution. Park-and-go projects enable commuters to park their cars near mass transit hubs and take the metro, metrobus or buses. An area of 1 million square meters will be allocated for commuters in 24 locations across the city. Underground car parks will also be built near metro stations, and buses and other forms of public transportation aim to minimize the number of cars on the roads as well as reduce polluting emissions from cars.

Finding a proper space to park one's car is a problem plaguing motorists, although the number of parking lots operated by the municipality rapidly increased in recent years. Still, it is not sufficient, as the number of cars increases almost daily, and public spaces such as spacious courtyards of schools are used as parking lots when they are closed during semester breaks. The municipality now plans to build permanent parking garages at schools. It plans to demolish schools with large plots and rebuild them with underground parking garages. These garages will have separate entry and exits from the schools, and a portion of revenues from parking fees will be used in the schools' operation.

It remains to be seen how much these solutions will curb the traffic congestion that costs Istanbul residents nine days of wasted time every year, however. A study sponsored by Yandex showed that motorists and commuters spent an average of 219 hours stuck in traffic in 2014.

Apart from the municipality's plans, a Bosphorus tube project, an underwater road tunnel and a third bridge over the Bosporus are in the works to ease the traffic between the two sides of the city.
Last Update: Apr 18, 2015 10:40 pm
RELATED TOPICS