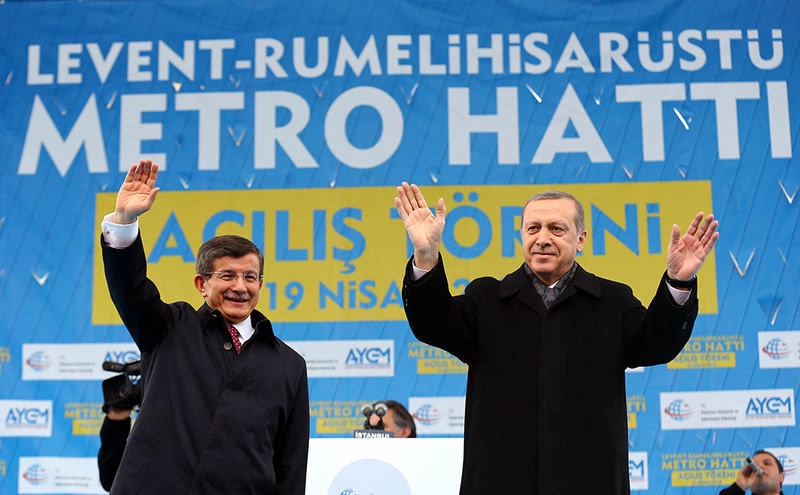 A new metro line was inaugurated on Sunday in Istanbul to help relieve the city of its traffic congestion problem. The line that will connect the city’s Rumeli Hisarüstü and Levent districts is the latest in Istanbul’s ever-growing metro line

Turkish President Recep Tayyip Erdoğan and Prime Minister Ahmet Davutoğlu launched the first ride of the metro line between Rumeli Hisarüstü and Levent on the European side of Istanbul on Sunday.

Promoted as a "mini-metro line" at 3.3 kilometers, the line connects the campus of the prestigious Boğaziçi University to Levent, a main commercial hub that swarms with thousands of commuters daily. The four-stop line will drop by Nispetiye and Etiler, two upscale neighborhoods dotted with popular entertainment venues and will connect with a longer metro line in the Levent district. The total travel time is estimated to be six minutes, significantly cutting the travel time between the two points that sometimes takes more than one hour especially during rush hours. The trains that will operate on the line have a capacity of 8,100 people.

The new line is the first to be launched since the Yenikapı-Aksaray metro line, which was inaugurated last year and shortened travel between the city's Asian and European side by a connection to the Marmaray, the underwater railroad tunnel.

The metro is one of the fastest ways to get around Istanbul, a city of over 14 million people that suffers from chronic traffic problems, named the second-worst in the world after Moscow.

The Istanbul Municipality had announced earlier this week that four new metro lines would be added to the city's existing network. Mayor Kadir Topbaş has announced that the construction would begin shortly on Mecidiyeköy-Kabataş line, Ataköy-İkitelli line and Bakırköy-Bağcılar line on the European side and Dudullu-Bostancı line on the Asian side. They will have a total length of over 40 kilometers.

Efforts to expand the metro line, which was only 45 kilometers a decade ago, are still underway with new lines planned to reach as far as Beylikdüzü on the European side to Pendik on the Asian side. President Erdoğan had said during his tenure as prime minister in 2013 that they envisioned to expand the network to over 700 kilometers this decade.

Focusing on mass transit is a chief strategy of authorities to ease the traffic congestion in the city where over 3 million vehicles out of 19 million across the country are registered.

Among the solutions is a park-and-go project that enable commuters to park their cars near mass transit hubs and take the metro, metrobus or buses. An area of 1 million square meters will be allocated for commuters in 24 locations across the city. Underground car parks will also be built near metro stations, and buses and other forms of public transportation aim to minimize the number of cars on the roads as well as reduce polluting emissions from cars.