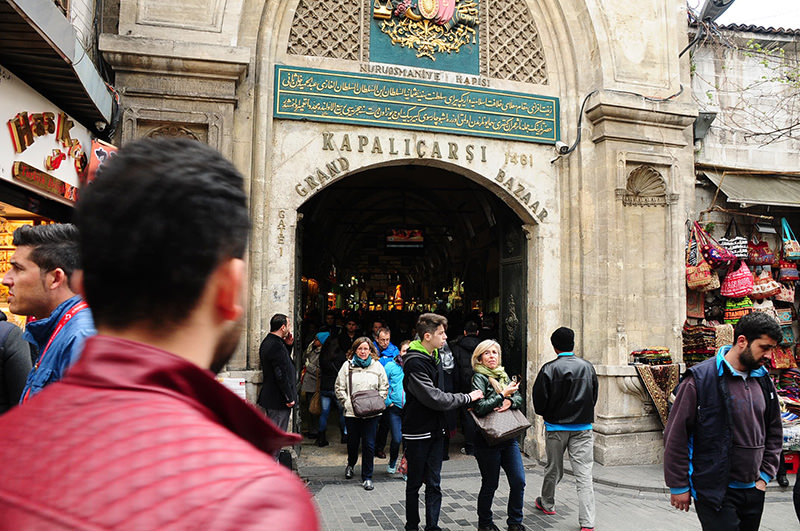 by Daily Sabah with Agencies Apr 22, 2015 12:00 am
Istanbul's historic Grand Bazaar was bustling on Tuesday with a protest by shopkeepers who refused to be evicted from the shops they rent from a state-run agency overseeing the marketplace.

The General Directorate of Foundations had issued eviction notices to 80 businesses in Grand Bazaar's Sandal Bedesteni, a section of the 15th-century structure where shops selling carpets, souvenirs, handbags, jewellery and clothes are located. The eviction was due to the leasing of the area through tender, reportedly to a single tenant for a long-term lease. After officials hung eviction notices on the shops that called businesses to vacate the place by April 22, angered shopkeepers locked themselves in the shops on Tuesday. They resisted the police who attempted to evict them for hours before the riot police stormed the bazaar's section, whose large doors were sealed by protesters late Tuesday. Twenty shopkeepers resisting the police were detained and released early on Wednesday. Released detainees returned to their shops on Wednesday afternoon and started evicting their shops in the presence of police. A group of shopkeepers staged a protest outside the bazaar against eviction as the goods were being removed from the shops.

Shopkeepers, many running businesses for over two decades, told reporters that the General Directorate of Foundations had decided to lease their shops for a higher rent "to cover the costs of the restoration" of the Grand Bazaar, and they failed to reach an agreement with authorities to keep their shops. They claimed they never failed to pay their rent and called for a solution to the issue.

Bendevi Palandöken, president of the Confederation of Turkish Tradesmen and Craftsmen, said in a statement that the eviction of the Grand Bazaar shops would mean the "extinction of a culture." Rumors are already circulating that the adjacent shops would be converted into a hotel. Palandöken said it was unacceptable to have shopkeepers evicted before the peak season begins, referring to the summer season when a large number of tourists flock to the site for shopping. Palandöken called on the authorities to reach a deal with tradesmen in Sandal Bedesteni where 500 people work.

The Grand Bazaar, one of the oldest of its kind in the world, covers 45,000 square meters. It has 3,125 shops and 25,000 employees. The bazaar is visited by 91 million tourists every year and remains one of the most popular tourist destinations in Istanbul's historic peninsula, which is home to several world-famous landmarks including the Blue Mosque and Hagia Sophia, located several hundred meters away from the bazaar. Despite its cultural and economic importance, the bazaar has been neglected in terms of renovation and restoration due to multiple ownership, despite the fact that it has fallen into a state of disrepair over the years. The Municipality of Fatih district where it is located, readied a renovation project for the bazaar and set aside TL 25 million ($9.2 million) for the restoration and renovation.
Last Update: Apr 22, 2015 3:38 pm
RELATED TOPICS