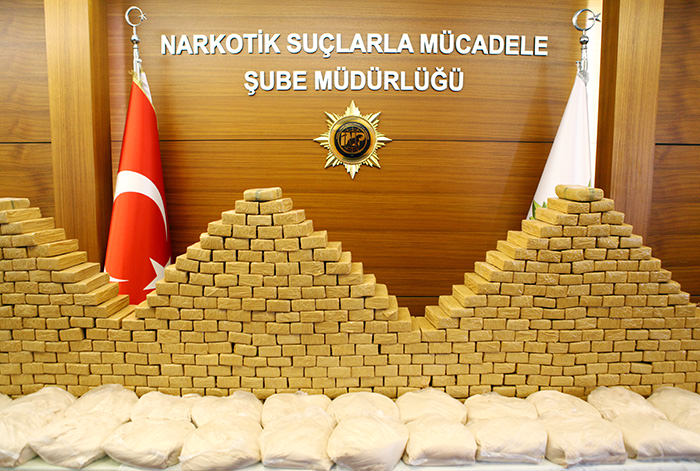 |AA Photo
by Anadolu Agency Apr 27, 2015 12:00 am
Hundreds of kilos of seized heroin has been put on display by Istanbul police in a month that saw security forces uncover 600 kilograms of the deadly drug in eastern Turkey.

Police said on Monday they launched operations last week against illegal drugs across the province, detaining around 70 people.
Istanbul Narcotics Branch Office said that between April 20 and April 26, police seized 360 kilograms of heroin, 3 kilograms of bonzai - a form of synthesized marijuana classified as the most dangerous drug in the country - more than 92,000 ecstasy tablets, and 2.6 kilograms of cocaine plus six guns.

Most of the heroin was seized in an apartment bathroom in Esenyurt on Istanbul's European side. Police are hunting for an Iranian national, identified only as K.A., who had rented the property.

Of the 70 people detained, 39 are to face further charges.

The operation comes in the same month that another major drugs haul took place in eastern Turkey. Turkish police seized 600 kilograms of heroin in a truck in eastern Elazığ province, the local governor confirmed on April 11.

The government unveiled a bill late in 2014 to tackle illegal drug use. Since then Turkish Prime Minister Ahmet Davutoğlu and his government have pledged a stronger effort in the fight against drugs, including a blanket ban on underground intoxicants and chemical substances.

Davutoğlu said last November that his government was fully committed to eliminating the problem of drug use, addiction and trafficking by raising public awareness in all segments of Turkish society.

"The government will first plot a drugs map of Turkey and firstly handle the protective phase, with the aim of arousing interest and care within all sectors of society towards the drug problem," he said.

Back in October, Davutoğlu explained his government's future attitude towards drug dealers as, "Those dealing drugs, including bonzai, will be treated like terrorists and the penalties will double if the crime is committed near schools."

His comments come amid research and media reports claiming that use of the notorious drug is on the rise.

According to the 2014 report from the Turkish Monitoring Center for Drugs and Drug Addiction, 89 percent of bonzai arrests occurred in Istanbul while 96 percent of the bonzai seizures were made in the Marmara region - a key transit point between Europe and Asia.

The same data also claimed that 92 percent of people detained in connection with the drug were detained for possession and only 7 percent were arrested for trafficking.
Last Update: Apr 27, 2015 6:33 pm
RELATED TOPICS